SALT LAKE CITY — Welcome to today's From Left Field! Here are three interesting things from the world of sports. Weirdly, two of them are from San Antonio.

Before the San Antonio Spurs played Minnesota on Monday night, a bat was on the loose inside of the AT&T Center, the Spurs' arena. Seeking to avoid one of their players having to catch it, the Spurs coyote was sent out with a net. In a Batman costume.

Here's the surprising thing to me: it actually worked! He actually caught the bat, who was unwise enough to fly close enough to the court to be caught. Maybe the Batman costume made him more willing to approach his eventual captor.

The game itself was a lot of fun, but the quirky highlight was Spurs 7'3'' center Boban Marjanovic scoring 17 points on 100% shooting. I will always love Boban's ears, but the handshake moment at the very end of this video is also incredible.

He swallows up announcer Andrew Monaco's hands like they're a straw!

I am no stranger to this. Last June, I interviewed Brazilian PG prospect George de Paula, who is also known for his gigantic hand size. I promise I have normal hands, but these were mine next to de Paula's: 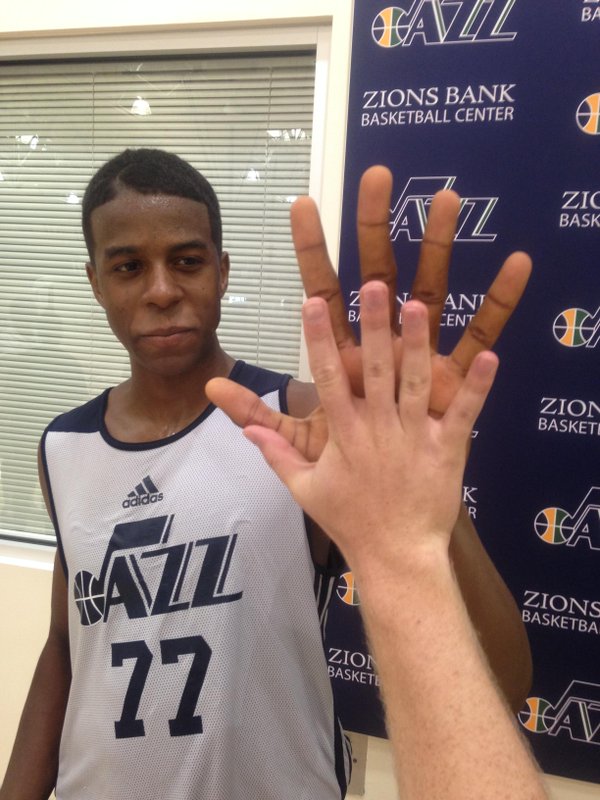 Athletes: just like you and I, except not at all in many different ways.

Incredible goal defies physics, except that physics are ultimately responsible

The first goal of Cuco Martina's English Premier League career with Southampton is a must watch, because I bet you didn't know a soccer ball could curve this much.

We need an expert opinion: What do you think of the bend on this shot, @Oficial_RC3? Slow motion 👇 https://t.co/MS2nlK3sjn — NBC Sports Soccer (@NBCSportsSoccer) December 26, 2015

I mean, I didn't think physics worked this way! I have been reliably informed, though, that the physics switch has been firmly in the on position all week long, and so physics has to explain the curve somehow. Physics, you continue to confound. ![](http://beacon.deseretconnect.com/beacon.gif?cid=352515&pid=4)