SALT LAKE CITY — After an optimistic 2014-15 season, the Utah Jazz have several important decisions to make entering this summer. Here are the important dates to know in the Jazz's offseason schedule.

The NBA Draft combine in Chicago will give all 30 NBA teams a chance to evaluate the invited NBA prospects.The format has changed slightly this year as 5-on-5 play is returning to the combine along with the traditional drills, strength and agility testing, interviews, and more. Many top draft prospects won't participate in the 5-on-5 play, but the format should provide a better look for NBA decision makers as they evaluate how the rest of the pack compares to each other.

Besides the likely No. 12 pick in the first round, the Jazz are also slated to pick No. 42 and No. 54 in the second round. Don't be surprised if the Jazz choose to make a draft day trade that changes their selection list.

June 26 - Jack Cooley and Chris Johnson can be traded

It probably won't matter, but if the Jazz decide to trade either of these two signees, they'll have to wait until June 26 to officially consummate the trade.

June 30 - Deadline to extend a qualifying offer to Joe Ingles

This is the date the Jazz can begin negotiations with the NBA's free agents. However, contracts can't be officially signed until July 9. The Jazz will also be able to renounce the salary cap holds held by free agents Joe Ingles and Jeremy Evans, if they want to open up additional salary cap space. 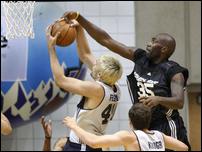 The newly announced Utah Jazz Summer League, featuring the Jazz, Celtics, Sixers, and Spurs, will take place on these dates. July 6, 7 and 9 will feature a doubleheader at EnergySolutions Arena in a round-robin style tournament. July 8 will be a rest day.

After the eight-day negotiating period, free agents can officially sign their deals starting on this date.

The Jazz will once again travel to Las Vegas with most of the league to participate in the NBA Las Vegas Summer League. The format of this tournament is still to be determined, but it's a great opportunity to see most of the NBA's new draftees.

Trevor Booker has a unique contract: the Jazz can choose to waive him before July 15 and pay just $250,000. However, if they don't waive him, he'll make $5 million. This gives the Jazz a lot of flexibility. If they find a willing player who deserves massive salary cap space in the first 15 days of free agency, they can waive Booker and make the big acquisition. If nobody bites, the Jazz can keep Booker on the roster to provide depth.

The Jazz will have the option of withdrawing the qualifying offer (if one was made) to Joe Ingles if they need the extra $1 million or so to sign a free agent. That flexibility goes away after this date.

Dante Exum and the rest of the Australian Boomers will take on New Zealand in a two-game home-and-away series to determine which team qualifies for the 2016 Summer Olympics in Brazil. Joe Ingles will not participate after a mutual decision by club and country to have him rest this summer following a grueling first season in the NBA. Game 1 will be played in Rod Laver Arena, the home of the Australian Open tennis final.

Sept. 6 - France vs. Bosnia and Herzegovina

While Oceania's Olympic qualifying tournament is as simple as can be, the European championship is a two-week affair involving 24 countries in 5 different host cities. The Jazz's tie to the action is center Rudy Gobert, who will be anchoring the French lineup against the rest of Group A (above). After the group stage comes the knockout rounds, with the schedule yet to be determined.