Tsarnaev, 21, wiped tears from his eyes quickly and fidgeted in his chair as his mother's sister sobbed uncontrollably. He had maintained an uninterested expression since his trial began in January.

The aunt, Patimat Suleimanova, cried as she sat down about 10 feet from Tsarnaev. The tears began falling before she began to testify, and she was only able to answer questions about her name, her year of birth and where she was born.

After a few minutes, Judge George O'Toole Jr. suggested that the defense call a different witness so she could compose herself. As she left the witness stand, Tsarnaev used a tissue to wipe his eyes and nose.

Five relatives — three cousins and two aunts — took the witness stand, though the aunt who broke down did not complete her testimony. As Tsarnaev was led out of the courtroom before the lunch recess, he blew a kiss at the other aunt, who also cried during her testimony. The relatives acknowledged they had not seen Tsarnaev since he was 8, when he moved to the U.S. with his family.

Tsarnaev, who had lived in the former Soviet republic of Kyrgyzstan and the Dagestan region of Russia, was convicted last month of 30 federal charges in the bombings, including 17 that carry the possibility of the death penalty. He moved to the U.S. in 2002 and committed the bombings, which killed three people and wounded 260 others, when he was 19.

Prosecutors say Tsarnaev and his radicalized older brother, Tamerlan, were equal partners in the bombing, and they have urged a jury to sentence Tsarnaev to death.

Tsarnaev's lawyers say Tamerlan, 26, was the mastermind of the attack and lured his brother into his plan. Tamerlan died days after the bombings following a shootout with police.

A cousin testified Monday that Dzhokhar was a kind and warm child, so gentle that he once cried while watching "The Lion King."

"I think that his kindness made everybody around him kind," Raisat Suleimanova said through a Russian interpreter.

Assistant U.S. Attorney William Weinreb pounced, asking her if she believes a deadly attack on innocent civilians can be considered kind. Tsarnaev's lawyer objected, and Suleimanova was not allowed to answer the question.

Shakhruzat Suleimanova, a sister of Dzhokhar's mother, Zubeidat, testified that Dzhokhar, Tamerlan and their two sisters were well-behaved as children.

"They were so good. They wouldn't hurt a fly," she said.

Suleimanova said the family was crushed when Zubeidat moved to the U.S. with her husband and children. Five or six years later, when Zubeidat returned to Russia for a visit, the family was shocked to see her sister, always a fashionable dresser, cloaked in black and wearing a Muslim headscarf. Tsarnaev's lawyers have argued that he was influenced by his brother and his mother, who had become radicalized in the years before the bombings.

Another cousin, Nabisat Suleimanova, said Tsarnaev was loved by the entire family.

"He was an unusual child. He was wunderkind," she said.

She said he had a softening effect on an aunt who was very stern and strict with her own children but not with him.

Rosa Booth, a high school friend of Tsarnaev's, said she met him in a math class at Cambridge Rindge and Latin in 2011 and spent time with him and other friends.

"He had a sweetness about him, maybe a little shy," she said.

She said Tsarnaev, whom she described as "goofy," did not talk about politics or religion.

Prosecutors urged the judge last week to press Tsarnaev's lawyers to make sure his relatives testify soon because 16 FBI agents have been assigned, at great expense, to guard and protect them while they are in the U.S. The family members arrived in Boston on April 23. 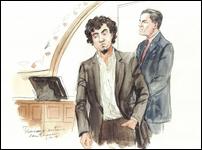 Bomber's teacher: He 'always wanted to do the right thing'

As a child, Boston Marathon bomber Dzhokhar Tsarnaev was quiet, hardworking and "always wanted to do the right thing," his third-grade teacher testified Wednesday to jurors who will decide whether he spends the rest of his life in prison or is sentenced to death.

"I think that his kindness made everybody around him kind," Raisat Suleimanova said through a Russian translator.

Assistant U.S. Attorney William Weinreb pounced, asking her if she believes a deadly attack on innocent civilians can be considered kind. Tsarnaev's lawyer objected, and Suleimanova was not allowed to answer the question.

In all, five of Tsarnaev's family members are expected to take the witness stand in federal court.

Prosecutors urged the judge last week to press Tsarnaev's lawyers to make sure his relatives testify soon because 16 FBI agents have been assigned to guard and protect them while they are in the United States. The family members arrived in Boston on April 23.

"It's an enormous expense and distraction for the agency, and that's just part of the expense that the government has endured," Weinreb said during a sidebar discussion in court with Tsarnaev's lawyers and the judge, according to a transcript that was made public.