SALT LAKE CITY — With a 3-0 start to the season, Utah looked like it had made a step in the right direction and was bound for a bowl game this season.

A 21-0 start against Washington State only added to the excitement and the possibilities about Utah’s future success Saturday — maybe an eight or more win season, or even becoming the Pac-12 South Division regular-season champs? The possibilities were seemingly limitless and suddenly the Pac-12 looked like an open field for the taking (OK, that’s extreme, but the optimism surrounding the program was high on the Utes).

But nearly as fast as the start to Utah’s quick lead over Washington State, the momentum faded, the Cougars came back to claim a 28-27 victory and Utah’s season went from great progress to being in supposed shambles once again.

There were several what ifs in Saturday’s game: What if Andy Phillips had not missed the first 46-yard field goal? What if Dres Anderson held onto the ball at the end of the game for a potential touchdown? What if Utah went for it on fourth-and-inches?

But it was the overall performance of the offense that dictated the way Utah lost to Washington State.

Quite simply, Utah head coach Kyle Whittingham said the offense didn’t get it done and that the lack of plays was mostly responsible for the loss.

“When you score one offensive touchdown you don’t have much of a chance to win,” Whittingham said. “That was really the issue. We’ve got to be more productive, particularly throwing the ball.

When you score one offensive touchdown you don't have much of a chance to win. That was really the issue. We've got to be more productive, particularly throwing the ball.

While weather was expected to be a major contributor to Utah’s struggles, Whittingham and his players said it played no result on how the offense played.

“The weather really wasn’t a factor at all,” running back Devontae Booker said. “We just had to go out there and play as a team and get a team win.”

For a program that hoped to have brushed away the skeletons haunting its Pac-12 play, Utah once again stumbled on offense in similar fashion to years past, leaving it winless in Pac-12 openers.

As in recent years, the defense was called upon to keep Utah in the game while the offense found myriad ways to script three-and-out situations. This time, however, there weren’t injuries to key positions on Utah’s offense.

Put simply, Utah’s offense couldn’t get it done when it counted most.

Quarterback Travis Wilson ended the game throwing for 172 yards and completed only 47 percent of his passes. His style of play was anything from the more mature Wilson of the first three games of the season. He looked rushed and struggled to hit his receivers in the hands. Many passes were overthrown or simply off target. But Wilson was not the only player at fault in the offensive woes.

Anderson was thrown to eight times, with at least two passes that could have given Utah big yards and some momentum, but failed to bring down a catch. Other receivers, too, couldn’t hold onto the ball and Utah was forced to rely on the defense to keep the Cougars from coming back because the offense had no answers. 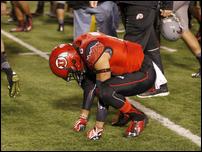 Utah learned the hard way Saturday night that early leads do not guarantee a victory, particularly in Pac-12 play and with an opposing quarterback that averages 475 passing yards a game.

“Throws he (Wilson) usually makes were sailing a little bit. We had a lot of drops. (Wilson’s) numbers look a lot better if we make the catches we normally make,” Whittingham said. “It’s no one person’s fault. I’m not trying to point the finger exclusively at the offense. Like I said, all we had to do was get a stop on defense or make another big play on special teams. We’re all involved. But I know we’ve got to be more productive on offense — have to.”

“We had a 21-point lead and everything went south from there,” Booker said. “We had a lot of chances, opportunities to win, but we just didn’t come through.”

One bright spot on the offense, though, was Booker, who managed a 76-yard rushing touchdown, and a comfortable lead for much of the game. He ended with 178 rushing yards, accounting for half the offensive production for the Utes. Aside from Booker’s performance, Utah was slow to get the chains moving and the offense couldn’t convert when it needed to in critical moments.

In the game prior, Utah kept Michigan out of the red zone all game. This week, that same treatment was afforded to Utah, and while it would be easy to say Utah got comfortable in its play-calling after taking a commanding lead, Whittingham said there was no chatter of letting up. Utah was simply outperformed.

Utah now faces a difficult top-10 opponent in No. 8 UCLA on the road in Los Angeles Saturday. While one loss on the season is nothing too detrimental to the success of a program, the potential for a bowl game will likely rest on the performance against the Bruins. How Utah comes out playing at the Rose Bowl, particularly the offense, will be more important than its loss to Washington State.

“We’re going to find out who we are this week,” Whittingham said. “It’s a big challenge. I watched that game the other night and they look like they’ve got a lot going for them, so that will be a big challenge for us at their place.”