US advances to World Cup's 2nd round despite loss 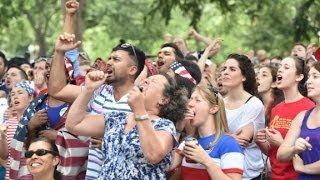 U.S. loses to Germany, but advances 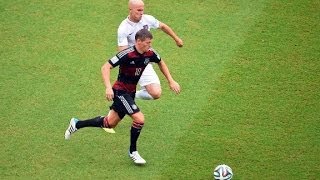 How did the U.S. advance after losing?

RECIFE, Brazil (AP) — They heard about people back home watching during their lunch breaks, streaming on office computers or playing hooky with fellow fans. And then, as the bus pulled away from the hotel Thursday, the U.S. World Cup team was struck with an unusual sight.

Hundreds, maybe thousands of fans in red, white and blue, walking for miles around stalled cars through nearly hip-high water along flooded streets and highways, making their way to the stadium to cheer them on.

"That kind of passion to root us on is what really helps drive us," defender Omar Gonzalez said. "Now we give them another game to go to."

No late goals in this one. Not even a win. But despite a 1-0 loss to Germany, the United States was good enough to advance to the knockout stage of consecutive World Cups for the first time and good enough to hold onto the national attention that soccer has finally grabbed in America.

"I'm getting emails from people who work at companies where the executives have called a three-hour break and put on giant screens," U.S. Soccer Federation President Sunil Gulati said. "All of this ... is pretty extraordinary, and that will build for the next few days."

Thomas Mueller scored off a rebound in the 55th minute to give Germany first place in Group C with seven points, but the Americans held onto second when Portugal defeated Ghana 2-1 in a game played simultaneously in Brasilia.

Two minutes after Mueller's goal, Ghana's Asamoah Gyan tied the score, leaving his team one goal from matching the U.S. with four points and moving ahead on the second tiebreaker, goals scored. But then Cristiano Ronaldo put the Portuguese back ahead in the 80th, giving the Americans a little margin for error.

On the sideline, U.S. goalkeeper coach Chris Woods used his fingers to signal "2-1" to Tim Howard. But Howard was unsure which team was ahead.

"Then Woods gave the thumbs up — in our favor," Besler said.

Around the same time, the American fans behind the other goal started cheering, having learned of Ronaldo's goal from whatever electronic device they had brought along.

Portugal opened with a 4-0 loss to Germany and tied the U.S. 2-2 on Sunday with a 95th-minute goal, so the U.S. had an even goal difference while the Portuguese were at minus three.

The Americans advance to a round-of-16 game Tuesday in Salvador against Belgium.

They started celebrating at the final whistle, 30 seconds before the other game ended. The script was similar to that of 2002, when the U.S. opened with a 3-2 win over Portugal, then tied South Korea 1-1 and lost to Poland 3-0. The Americans advanced 12 years ago because South Korea defeated the Portuguese on an 80th-minute goal.

Last weekend's game was seen by 24.7 million viewers on ESPN and Univision, and with online viewers included it was the most-watched soccer match in American history. This game kicked off at noon EDT, and ESPN said its online streaming application set a record with 1.7 million concurrent users for all programs.

Across America, youngsters and athletes are turning into avid soccer supporters. San Francisco Giants pitcher Tim Lincecum wore a U.S. jersey Wednesday after his no-hitter against San Diego, and Adam Wainwright had the American flag painted on his face when he went out to stretch with his St. Louis Cardinals teammates last weekend. Actor Will Ferrell came to Recife for Thursday's match, and the Empire State Building was illuminated in red, white and blue.

"It translates into more fans, more casual fans, more kids that get turned onto the sport and may turn out to want to play," Gulati said.

Because of the heavy rain, the Americans' bus trip to the stadium took 50 minutes, twice the time needed to reach Saturday's training session. And because of the tropical downpour, both teams weren't allowed to warm up on the field.

Some of the players' family and friends stayed at their hotel. Others' vehicles couldn't reach Arena Pernambuco, where rain fell throughout much of the game and there were scattered empty red seats.

U.S. captain Clint Dempsey said it was "in the back of your mind about your family not being able to make it to the game because of the traffic and everything. You just want to make sure that they're safe."

Germany scored when Mesut Ozil took a short corner kick, received a pass back and crossed to Per Mertesacker. His header was parried by Howard into the path of Mueller, who curled a right-footed shot from 18 yards inside the far post.

Germany had 63 percent possession and nine shots on goal to one for the U.S.

Klinsmann hugged Germany coach Joachim Loew — his assistant on Germany's 2006 World Cup team — and Brad Davis raised both hands after the final whistle and led the applauding U.S. team to the side of the stadium where the majority of American supporters sat.

The outcome was especially satisfying for a pair of U.S. players: Midfielder Jermaine Jones played three games for Germany in 2008 before switching allegiances, and right back Fabian Johnson started for Germany in the 2009 European Under-21 Championship final.

"We showed some people," he said, "people that were talking like we have no chance to come through to the next round."