PROVO — With the 2013-14 BYU basketball season in the books, it is time to look to the future or in the case of this article, the distant future. Here is my breakdown of the four players who played at BYU this season (two of whom will not be on this upcoming year’s roster) who I think have the best chance of playing professionally. 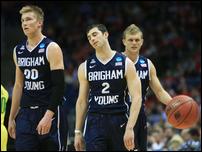 4 reasons why BYU basketball might be better off without Carlino

It was announced on Tuesday that BYU basketball point guard, Matt Carlino, would not be returning to the school for his last year of eligibility and would seek to transfer.

Weaknesses:Projection:Dylan Cannon is a regular KSL.com contributor and an avid sports enthusiast. He can be reached at dylancannon86@gmail.com or via his Twitter account @DylanCannon11.
×