Sister: Mother who drove with children into ocean thought there were 'demons'

430PM: Sister: Mother who drove with children into ocean thought there were 'demons' 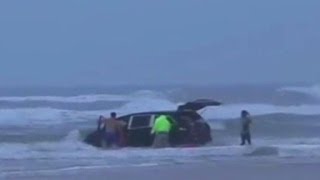 DAYTONA BEACH, Fla. (CNN) — She was trying to get help for her sister.

Help for a woman who was distraught and uneven, having driven to Florida to get away from her husband. Who had gone, at her sister's urging, to a hospital only to sign herself out earlier in the day. A woman who was "talking about Jesus and that there's demons in my house," her sister said on a 911 call.

"I'm trying to control her," the sister said, expressing worry about her sister's three children. "... I'm trying to keep them safe."

At first, the plea appeared to pay off: Police caught up to the woman -- later identified as Ebony Wilkerson -- after she sped away from her sister's Daytona Beach apartment. An officer questioned her as her three children sat in the Honda Odyssey's backseat, smiling and seemingly calm. Wilkerson explained that she feared for her safety, worried that her estranged husband would harm them.

According to a Daytona Beach Police report, the officer believed she might have a mental illness. Despite these concerns, this officer talked to a detective also at the scene and let her go on her way, concluding she couldn't be held under a Florida law that allows for detention of people believed to be impaired by mental illness and who possibly pose a risk of harm.

Almost two hours later Tuesday, Wilkerson drove her black minivan -- with the three kids still inside -- into the surf of the Atlantic Ocean.

Tim Tesseneer was driving along Daytona Beach on Tuesday with his wife when they noticed the minivan driving through shallow water. They heard the screams, he said, of two children, who were crying and waving for help out of one of the rear windows.

Tesseneer threw the car in park and raced over to help. One child was screaming, Tesseneer recalled Wednesday to CNN's Piers Morgan. " 'Please help us, our mom is trying to kill us.' "

The other child he could see was wrestling a woman for the steering wheel. But the woman just kept saying, " 'We're OK. We're OK. We're OK,' " as another man joined Tesseneer trying to get the driver to stop.

With the minivan in the cold, heavy surf of the Atlantic, the second man, Stacy Robinson, opened a door and pulled out the two panicked children. There was a good chance if he and Tesseneer hadn't been there, the children, ages 10 and 9, would have drowned inside the van as it pitched in the water, officials said.

Another child, a 3-year-old girl, was strapped in a car seat. A lifeguard dived in through a front window and unbuckled the child and handed her to another lifeguard as the vehicle bobbed in water about 3 feet deep.

Meanwhile, Wilkerson walked away quietly with a strange, almost "possessed" look on her face, witnesses said.

Not for long. Authorities quickly caught up to her. And on Friday she was officially arrested on three counts of attempted first-degree murder, according to Volusia County Sheriff Ben Johnson.

Given what authorities have said since Tuesday's incident, the charges hardly come as a surprise. Still, as more details come out -- like the sister's 911 call and the charging affidavit -- they paint an ever more disturbing picture, especially for Wilkerson's children.

For evidence of their ordeal, one need only listen to what all three continuously uttered when officers caught up with them at Halifax Health Medical Center.

Mom said: 'I am keeping all of us safe'

The story begins in South Carolina, where Wilkerson and her children had been until she made the decision to leave the state, to leave her husband behind. Her children later detailed the fractured relationship between their parents, as well as the time her son got into trouble after speaking to authorities probing a domestic situation there.

"She came down to me for protection," Wilkerson's sister explained in her 911 call, of the quartet coming to the eastern Florida coast.

Wilkerson's sister was especially concerned about protecting the three children. Wilkerson's fragile mental state led her to call police to ask for a well-being check "because she's ... having psychosis or something or postpartum."

The sister explained they'd gone to the hospital Monday, only to have a pregnant Wilkerson check herself out the next day even though "she's still not all there." And she'd taken away the minivan's keys so her sister couldn't drive away with her children.

Or so she thought.

However she did it, Wilkerson drove off as her sister talked with police.

That was followed by the initial encounter with the officer and detective, then later the incident on Daytona Beach.

The children later told investigators that their mother told them "to close their eyes and go to sleep." As they screamed as the minivan went into the water, she insisted she was taking them to a better place, saying repeatedly: "I am keeping all of us safe."

After their rescue, Wilkerson herself talked to authorities. "She seemed confused and jumped from one religious topic to another," states the charging affidavit.

Wilkerson explained at one point that she'd been driving "too close to the water (when) the waves pulled her in." Then, near the end of their talk, she said she did not want her husband around her children.

On Thursday night, an arrest warrant was signed for Wilkerson. And shortly after 11 a.m. -- after being released from Halifax Health -- she was arrested.

Wilkerson was being held on three counts of aggravated child abuse in addition to the first-degree murder charge, Volusia County Sheriff Ben Johnson said Friday. She had not yet requested an attorney, he said.

Investigators claim in the affidavit: "Ebony Wilkerson acted with premeditated design to kill her three children."

CNN's Jason Hanna and Steve Almasy contributed to this report.