SeaWorld takes out ads to defend itself against whale mistreatment accusations 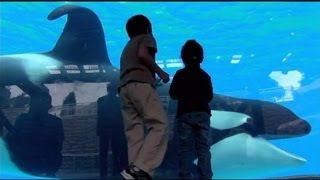 ORLANDO, Fla. (CNN) — Faced with a growing backlash from entertainers and others responding to a documentary film claiming mistreatment of whales, SeaWorld bought full-page ads in newspapers nationwide Friday to call the accounts inaccurate and paint its employees as "true animal advocates."

"The truth about SeaWorld is right here in our parks and people," the company said in the ad, which appeared in The New York Times and other papers.

PETA (People for the Ethical Treatment of Animals) immediately issued a statement challenging the accuracy of the ads and encouraging people, "Please don't fall for it."

SeaWorld has been battered in recent weeks since the television premiere of the documentary "Blackfish" on CNN.

The movie traces a 39-year history of killer whales in captivity, leading up to the 2010 killing of SeaWorld trainer Dawn Brancheau by the 12,000-pound orca Tilikum -- a whale previously associated with the death of two other people.

Filmmaker Gabriela Cowperthwaite said the documentary team's research for the film shows the whales suffer from boredom and stress and are unsuitable for life in captivity.

A Malibu, California, school recently canceled its annual overnight field trip to the park after students spoke out in opposition, and a San Diego, California, high school cinema class posted a video to YouTube with students pledging to spend no more money at SeaWorld until the company changes its practices.

Social media sites critical of SeaWorld also are filled with comments from people vowing they'll never go to the parks again after viewing the film.

SeaWorld has consistently rejected the "Blackfish" accusations, including in statements to CNN, but the ads published Friday are perhaps its most visible effort to defend itself.

In its ad, also posted to its website, SeaWorld:

• Denied accusations that it captures killer whales in the wild, saying it last did so 35 years ago.

• Said it does not separate whale calves from their mothers except for "the rare occasion that a mother killer whale cannot care for the calf herself."

• Argued its work with universities, governments and nonprofits has helped advance scientific understanding of killer whales in the wild, and said it has spent $70 million in recent years on habitats, which it calls "among the largest in the world today."

For instance, the animal rights group said, "Although SeaWorld is right in stating that five of its whales have life spans similar to those of orcas in the wild, it fails to note that nearly every other orca at SeaWorld -- some 35 of them -- has died prematurely from violent accidents, preventable injuries, illnesses caused by stressful living conditions, and more."

In its ad, SeaWorld says, "Our guests may enter our gates having never given much thought to the remarkable animals in our oceans ... When they leave with a greater appreciation for the importance of the sea, educated about the animals that live there and inspired to make a difference, we have done our job."

The problem, notes crisis communications expert David Johnson, is that some of those former guests are finding themselves increasingly uncomfortable about their affection for SeaWorld, and are willing to share their squeamishness with the world.

For instance, on YouTube, students from a Point Loma, San Diego, high school recount their happy memories at SeaWorld before promising to stay away until the park changes its polices. In another video, a 5-year-old boy talks of how the film made him angry about SeaWorld's treatment of whales.

While SeaWorld can get along without entertainers, widely watched images of children rejecting field trips to the parks will be more troublesome, Johnson said.

Evidence of whether that proves to be the case could be revealed in February, when the company should next file quarterly reports with the Securities and Exchange Commission showing its financial performance for the quarter that included the CNN airings of "Blackfish."

The company depends entirely on admissions and concession sales for its revenues, which totaled $538.4 million in the three months that ended on September 30.