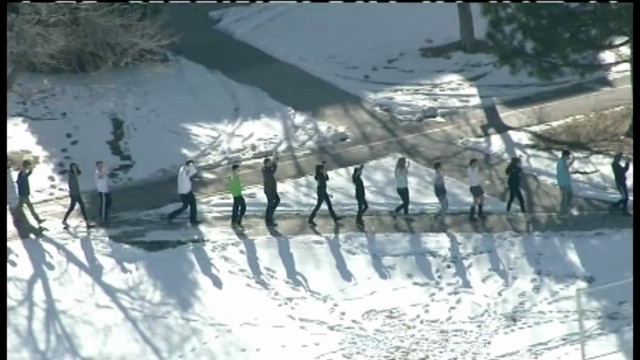 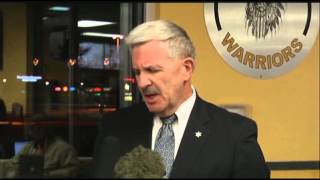 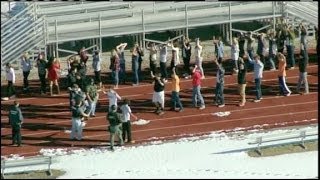 The tragic pattern of school shootings

CENTENNIAL, Colo. (AP) - A Colorado teenager who may have been nursing a grudge against a high school teacher since September intended to harm that teacher and inflict numerous other casualties when he entered his school and shot a student at point-blank range before killing himself, authorities said.

Karl Pierson, 18, fired six shots from a pump-action shotgun between the moment he walked into Arapahoe High School on Friday and the moment he killed himself in a library as a school security officer closed in on him, Arapahoe County Sheriff Grayson Robinson said.

Pierson's attack lasted just 80 seconds but reopened scars in a community traumatized by mass shootings at Columbine High School in 1999, an Aurora movie complex in 2012 and in Newtown, Conn., a year ago Saturday.

Arapahoe senior Claire Davis, 17, who was sitting with a friend when Pierson entered the library, was shot in the head. She was hospitalized in critical condition. Students and residents held a candlelight vigil for Davis Saturday night at a park near the school.

Pierson's original target was believed to be a librarian who coached the school's speech and debate team. Pierson was on the team, and he was disciplined in September by the librarian for reasons Robinson said were under investigation. Pierson made some sort of threat in September against the librarian, whose name was not released.

Students and a teacher said Pierson was an Eagle Scout who finished at the top of speech competitions. He competed in extemporaneous speaking _ in which students prepare short speeches on current events _ in the National Forensic League's national tournament in June in Birmingham, Ala.

"I think he (Pierson) really cultivated his speech and argument skills and really thought that was a big part of his identity," said Steve Miles, an English teacher who taught Pierson as a freshman. "He probably thought it was a pretty crushing blow to get kicked off the debate team."

Pierson legally purchased a shotgun at a local store on Dec. 6. He bought ammunition the day of the shooting, Robinson told a news conference. Anyone 18 and older is allowed to buy a shotgun in Colorado; only those over 21 can legally buy a handgun.

Pierson arrived at the school toting the shotgun and wearing the ammunition on his body. He had a machete and, in a backpack, carried three Molotov cocktails, the sheriff said.

Pierson fired a round down a hallway and shot Davis, who was sitting nearby with a friend. He fired another shot down the hallway, entered the library and ignited one of the incendiary devices. He fired a fifth round, ran to a corner and killed himself, just 80 seconds after entering the building, Robinson said.

Davis, the sheriff said, appeared to be a random target.

Davis' family issued a statement saying she is suffering from severe head trauma and asking for privacy. Friends and well-wishers posted prayers on Twitter, and some students collected money to help pay for her medical expenses.

"I feel like it's going to make us a stronger senior class and school as a whole," said Chris Davis, an Arapahoe senior who is not related to Claire Davis and helped organize the fundraising effort. He said she has a lot of friends, always seems happy and loves horses.

Pierson, whose parents are divorced, lived at least part of the time with his mother in a higher-end neighborhood in suburban Highlands Ranch. The front door of the home was covered with plywood Saturday after authorities conducted a search.

Students said he was a smart, funny and sometimes goofy student who sometimes debated his teachers.

"He would speak for himself," said Zach Runberg, 18, a senior in Pierson's English class. "He would not be afraid to tell someone how he feels."