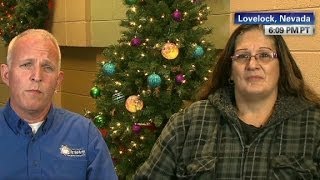 Details of the Nevada rescue 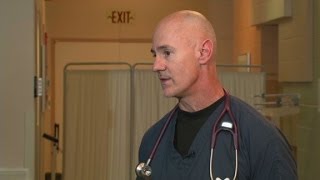 NEVADA (CNN) — The 2006 silver Jeep Wrangler with a black top carried the excited family of six into the back country of northwestern Nevada for a playful weekend outing in the snow.

Those moments of adventure dissolved into a fight for survival after the vehicle turned over, slid down an embankment on its top and ended up in a crevice 15 miles from Lovelock.

When dawn broke Monday to a temperature of 21 below zero, the situation for James Glanton, 34, and his girlfriend, Christina McIntee, and four children could have been desperate.

Instead, they kept their heads. They didn't try to walk out of danger, thereby making it easier for rescuers to find them.

Those rescuers did find them about midday Tuesday, nearly 48 hours after the ordeal began. And, within hours, an incredible story of resourcefulness and steady nerves began to trickle out.

The couple, who were without extra blankets, started a fire outside after the Jeep overturned. They heated rocks and placed them in the spare tire to keep the children, ages 3 to 10, warm at night.

Family of 6 found alive in Nevada

A desperate search for a couple and four children missing for two days in the below-zero cold of Nevada's rugged mountains turned jubilant Tuesday when rescuers guided in part by cellphone signals and footprints in the snow found them alive and well near their overturned Jeep.

"I have never heard of such a thing, but I think it was pretty clever of him," Paul Burke, who coordinated the rescue effort for the state Department of Public Safety, said of Glanton's tactics.

"To the extent he was ingenious about it, that is one for the books," Burke told CNN on Tuesday evening.

When three residents finally found the family and their vehicle during a massive search, the family had little food left, so resident Salvador Paredes pulled a candy bar from his pocket and shared it with them.

Glanton and McIntee, 25, along with their two children — Evan and Chloe — and McIntee's niece and nephew, were taken to Pershing General Hospital.

"They just expressed that they're really happy and they're going to enjoy this Christmas" more than usual.

Remarkably, the six had no frostbite, instead displaying symptoms of mild hypothermia and dehydration.

Vacek and others recounted the factors that worked in the family's favor: They had water and some food, heavy winter clothing, they stayed near the vehicle and were able to start and maintain a fire.

Speaking of the adults, Chris Montes, another rescuer, told CNN that "obviously they knew what to do. They kept those kids safe 48 hours in subzero temperatures."

The group apparently ran out of food on Monday, he said. The children, Montes said, "did not seem too bothered. They were in good spirits. They just figured they were camping."

Survival expert Joseph Teti said it's the little decisions that add up to an enhanced chance for survival in brutal conditions.

"Mother Nature will not allow you to make too many mistakes at all," said Teti, co-star of Discovery Channel's "Dual Survival."

The group was found safe in an area called Seven Troughs, according to the Pershing County Sheriff's Office. They were discovered from a distance by a volunteer searcher using binoculars to scan mountainsides, the sheriff's office said. It wasn't immediately clear which of the three rescuers made the discovery.

The search, which involved at least 200 people and spanned 6,000 square miles, was aided by technology.

Officials remained undaunted despite the fact they no longer received pings off the cell phone of the missing persons, said Sheila Reitz of the Pershing County Sheriff's Office.

On Monday, authorities had been encouraged when they were able to receive a couple of pings from the phone of Glanton. Cell service is spotty because the area is so remote.

The Civil Air Patrol, an auxiliary of the U.S. Air Force, said its cell phone forensics experts "played a critical role in helping rescuers narrow the search area," according to a statement by the patrol.

"The cell phone forensics team pinpointed where they could not possibly be," Nevada Wing Commander Col. Tim Hahn said in a statement. The forensic efforts "were very time-consuming," he said.

"This morning they provided a key clue that redirected the search and led to the rescue," Hahn said.

One of the CAP crews spotted the family's Jeep about the same time that the searcher with binoculars found the lost group, the patrol said.

The Air Force Rescue Coordination Center will award the Nevada Wing with six saves, Hahn said. The children's ages are 10, 4, 4 and 3, the patrol said.

Amanda Fitzpatrick, mother of 10-year-old Shelby Fitzpatrick, one of the missing children, joined the search in the bitter cold.

"It's been extremely hard, probably the hardest 24 to 36 hours of my life," she earlier told CNN's Piers Morgan. "It's my baby girl."

The close-knit community was both weary and ecstatic after the family was found. Pershing County Sheriff Richard Machado became emotional as he detailed the effort.

Jo Ann Weagant, a family friend, told CNN, said no one in Lovelock wanted to give up the search.

"I truly believe there was an angel in the sky watching over them," she said.

The family's disappearance was among the most dramatic developments in the Arctic-like weather shocking much of the Lower 48 states.

Big flakes of wet snow and ice snarled travel across the country Tuesday and hit major airline hubs in the Northeast, with about 1,200 flight cancellations reported by Tuesday evening.

Temperatures in storm-stricken parts of the country are expected to stay about 10 to 20 degrees below normal for the rest of the week, the National Weather Service said.