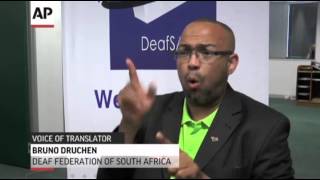 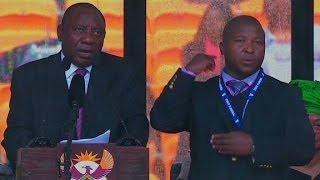 JOHANNESBURG (AP) - As one world leader after another paid homage to Nelson Mandela at a memorial service, the man standing at arm's length from them appeared to interpret their words in sign language. But advocates for the deaf say he was a faker.

The incident, which outraged deaf people and sign-language interpreters watching the service broadcast around the globe, raised questions of how the unidentified man managed to crash a supposedly secure event attended by scores of heads of state, including President Barack Obama.

It also was another example of the problems plaguing Tuesday's memorial, including public transportation breakdowns that hindered mourners going to the soccer stadium and a faulty audio system that made the speeches inaudible for many. Police also failed to search the first wave of crowds who rushed into the stadium after the gates were opened just after dawn.

The man, who stood about a yard (one meter) from Obama and other leaders, "was moving his hands around, but there was no meaning in what he used his hands for," Bruno Druchen, national director of the Deaf Federation of South Africa, told The Associated Press on Wednesday.

When South African Deputy President Cyril Rampaphosa told the crowd that former South African President F.W. de Klerk was among the guests, the man at his side used a strange pushing motion unknown in sign language that did not identify de Klerk or say anything about his presence, said Ingrid Parkin, principal of the St. Vincent School for the Deaf in Johannesburg.

The closest the man's gestures came to anything in sign language at that point might possibly be the words for "running horse," "friend" or "beyond," she said, but only by someone who signs terribly.

The man also used virtually no facial expressions to convey the often-emotional speeches, an absolute must for sign-language interpreters, Parkin said.

Collins Chabane, one of South Africa's two presidency ministers, said the government is investigating "alleged incorrect use of sign language at the National Memorial Service," but has not finished because it has been overwhelmed with organizing the public viewing of Mandela's body in Pretoria and his funeral Sunday in his hometown of Qunu. He did not identify the man, but said the "government will report publicly on any information it may establish."

"Program items such as stage participants or sign-language interpreters were the responsibility of the host organizing committee," Donovan added.

White House spokesman Josh Earnest added: "It's a shame that ... a service that was dedicated to honoring the life and celebrating the legacy of one of the great leaders of the 20th century has gotten distracted by this and a couple of other issues that are far less important than the legacy of Nelson Mandela."

"This man himself knows he cannot sign and he had the guts to stand on an international stage and do that," Parkin said. "It's absolutely impossible that he is any kind of interpreter. Or a language person at all, because he's not even using a language there."

Nicole Du Toit, a sign-language interpreter who also watched the broadcast, said in a telephone interview that the man was an embarrassment for South Africa.

"It was horrible, an absolute circus, really, really bad," she said. "Only he can understand those gestures."

The man also did sign interpretation at an event last year that was attended by South African President Jacob Zuma, Druchen said. At that appearance, a deaf person in the audience videotaped the event and gave it to the deaf federation, which analyzed the video, prepared a report and submitted a formal complaint to the governing African National Congress party, Druchen said.

In the complaint, the federation suggested the man should take the five years of training needed to become a qualified sign language interpreter in South Africa. But the ANC never responded, Druchen said.

A new complaint will be filed to the ANC with a demand for an urgent meeting, he said. The federation did not know the man's identity.

"We want to make a statement that this is a warning to other sign-language interpreters who are fake and go about interpreting," Druchen said. "I am hoping the South African government will take notice of this."

Bogus sign-language interpreters are a problem in South Africa because people who know some signs _ frequently because they have deaf relatives _ try to pass themselves off as interpreters, Parkin said. And those contracting them usually don't know how to sign, so they have no idea the people they are hiring cannot do the job, she said.

Associated Press writers Nastasya Tay in Johannesburg and Josh Lederman in Washington contributed to this report.