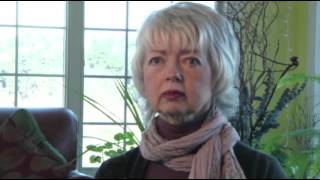 STRASBURG, Pa. (AP) - Once a week, Terri Roberts spends time with a 13-year-old Amish girl named Rosanna who sits in a wheelchair and eats through a tube. Roberts bathes her, sings to her, reads stories. She can only guess what's going on inside Rosanna's mind because the girl can't talk.

Roberts' son did this to her.

Seven years ago, Charles Carl Roberts IV barricaded himself inside an Amish schoolhouse near Lancaster, tied up 10 girls and opened fire, killing five and injuring five others before committing suicide as police closed in.

The Amish responded by offering immediate forgiveness to the killer _ even attending his funeral _ and embracing his family.

Terri Roberts forgave, too, and now she is sharing her experience with others, saying the world needs more stories about the power of forgiveness and the importance of seeking joy through adversity.

"I realized if I didn't forgive him, I would have the same hole in my heart that he had. And a root of bitterness never brings peace to anyone," Roberts said. "We are called to forgive."

Roberts has delivered the message to scores of audiences, from church groups to colleges, and is writing a memoir. She's even considered traveling to speak in Newtown, Conn., where a gunman killed 20 children and six adults at Sandy Hook Elementary School last year. But she is cautious, mindful an appearance there could give offense.

A book on the Amish school shootings, "Amish Grace: How Forgiveness Transcended Tragedy," was found among the possessions of Sandy Hook Elementary School gunman Adam Lanza, according to a recent report by the prosecutor in charge of the Newtown investigation. The report said Lanza was preoccupied with mass shootings.

One of Roberts' sons is making a documentary _ called "Hope" _ about her remarkable journey from heartbroken mother to inspirational speaker.

Zachary Roberts originally conceived the film to help his mother. But it's also proving to be cathartic for him.

"It was like a step toward getting this off my shoulders and being able to speak about it," said Roberts, 35, who lives in Sweden. "I have a kid now, and I don't want this to be one of those dark family secrets that nobody talks about. I want to be OK with it, and I want my daughter to be OK with it."

After filming on location in Pennsylvania, Zachary Roberts and the documentary's producers recently released a trailer and have turned to a crowd-funding website to raise money to complete production.

Roberts appears in the trailer and doesn't mince words about the challenge that faced his mother after his 32-year-old brother's rampage: "How does the mother of a mass murderer move forward in life?"

Her husband, Chuck, had wiped away so many tears that he'd rubbed his skin raw. The retired police officer hung his head, inconsolable. "I will never face my Amish friends again," he said, over and over.

An Amish neighbor named Henry told him otherwise. "Roberts, we love you. We don't hold anything against you or your son," Terri Roberts recalled Henry saying as he massaged Roberts' slumped shoulders. "We're a forgiving people."

It was an extraordinary gesture, one that gave Terri Roberts her first glimmer of hope. She calls Henry her "angel in black."

That same day, a counselor helped her realize that "we do not need to live in our sorrow." Her son's rampage was one part of his life, a terrible snapshot, the counselor said. Better to focus on all the good years.

"I can't tell you what that did for me. That was just so helpful for me, and I feel now that it's helped many other people," Roberts said.

Charlie Roberts said in suicide notes and a last call with his wife that he was tormented by unsubstantiated memories of having molested a couple of young relatives and by the death of his daughter in 1997, shortly after she was born.

His mother first shared her story nine months after the Oct. 2, 2006, slayings at West Nickel Mines Amish School, when a friend from work asked her to speak to some Japanese exchange students. The message resonated, and Roberts said she felt a calling from God.

Roberts remains close with Charlie Roberts' wife, Marie Monville, who is also breaking her silence with a book, "One Light Still Shines," which shares a similar message of hope amid despair. Like her former mother-in-law, Monville has relied on her Christian faith to carry her through the worst time in her life.

"The message of the book is that it doesn't matter how dark the day is, the love of the Lord continues, and he is capable of writing a redemption story over our lives even in those dark places," said Monville, who has since remarried.

She said God has given her "healing and freedom from the weight of Charlie's choices and from the words, `the shooter's wife,' that tried to define who I was."

The Amish were celebrated for how they responded to the massacre. Yet forgiveness doesn't always come easily or automatically, even for this Christian sect whose members are known for their plain dress and simple ways.

Rosanna King's father, Christ King, said the Amish are like anyone else, with the same frailties and emotions.

"We hope that we have forgiven, but there actually are times that we struggle with that, and I have to ask myself, `Have I really forgiven?'" King said.

"We have a lot of work to do to live up to what we are bragged up to be," he continued. "Everyone was talking about this forgiveness thing, and I felt that was putting a lot of weight on our shoulders to live up to that."

Rosanna wasn't expected to survive after being shot in the head. She laughs, cries and responds to stimuli, and King said she is mentally alert. But she requires constant care.

Terri Roberts' weekly visits with Rosanna force her to confront the damage her son caused. But Roberts also finds peace as she spends time with Rosanna and provides some relief to the teen's family, if only for a few hours.

"Beautiful young woman, but life is not as it should've been for this little girl. So my mind will never forget the hardship that day has caused in many people's lives," Roberts said.