South Africans of all faiths pray for Mandela 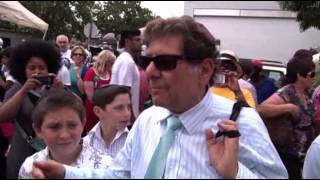 Raw: Prayers and Celebrations for Mandela

CAPE TOWN, South Africa (AP) — In death, Nelson Mandela unified South Africans of all races and backgrounds Sunday on a day of prayer for the global statesman - from a vaulted cathedral with hymns and incense to a rural, hilltop church with goat-skin drums and barefoot dancing.

Mandela was remembered in old bedrocks of resistance to white domination as well as former bastions of loyalty to apartheid.

"May his long walk to freedom be enjoyed and realized in our time by all of us," worshippers said in a prayer at the majestic St. George's Cathedral in Cape Town, where the first white settlers arrived centuries ago aboard European ships.

South Africa's reflection on Mandela's astonishing life was a prelude to a massive memorial in a Johannesburg stadium Tuesday that will draw world leaders and luminaries. They will gather to mourn, but also to salute the achievements of the prisoner who became president and an emblem of humanity's best instincts.

The extended farewell - a bittersweet mix of grief and celebration - ends Dec. 15, when Mandela is to be buried in his rural hometown of Qunu in Eastern Cape province.

The anti-apartheid campaigner wanted to die in those modest, traditional surroundings; instead, he died Thursday at age 95 in his home in an exclusive Johannesburg area. He was surrounded by family after months of a debilitating illness that required the constant care of a team of doctors.

Family friend Bantu Holomisa told The Associated Press that Mandela wasn't on life support in his final hours. He appeared to be sleeping calmly but it was obvious that he was finally succumbing, added Holomisa, who said he saw Mandela about two hours before his death.

"I've seen people who are on their last hours and I could sense that he is now giving up," said Holomisa, who is the leader of the United Democratic Movement in parliament.

"You could see it is not Madiba anymore," Holomisa added, using Mandela's clan name.

The government and Mandela's family have revealed few details about Mandela's death. Ahmed Kathrada, who was sentenced to life in prison with Mandela in 1964, said he was informed shortly before Mandela's death that his old friend had little time left.

Kathrada said Graca Machel, Mandela's wife, conveyed the message to him through another person that Mandela "will be leaving us that night" and "the doctors have said, `Anytime.'"

The death still came as a shock to many South Africans, so accustomed to the enduring presence of the monumental fighter, even when he retired from public life years ago and became increasingly frail.

"He was more than just an individual soul. He was the exposition of the African spirit of generosity," said the Rev. Michael Weeder, dean of St. George's Cathedral.

But he cautioned that the country still has so much to do.

"The strength of the new South Africa will be measured in the distance that the poor and the marginalized travel from the periphery to the center of our society," Weeder said.

In Johannesburg, hundreds swayed and sang at the Regina Mundi Church that was near the epicenter of the Soweto township uprising against white rule in 1976 and served as a refuge from security forces who fired tear gas around the building and whose bullets have pockmarked the outside walls.

The Rev. Sebastian J. Rossouw compared Mandela to the biblical figures Isaiah and John the Baptist as men who led in dark times, calling him "that moonlight in the dark night."

Mandela's ex-wife, Winnie Madikizela-Mandela, joined one of his grandsons, Mandla Mandela, and South African President Jacob Zuma in a prayer service in Johannesburg.

Inside a church behind Mandela's property in the eastern village of Qunu, where he will be buried, about 50 people held a raucous, celebratory service. A robed man banged on a drum. Clapping men huddled as women danced on the concrete floor.

"There is still hope in the hardship that you are facing daily," Mzingelwa told the congregation.

In an affluent, predominantly white suburb of the capital, Pretoria, parishioners prayed for Mandela at what was once a worship center for pro-apartheid government and business leaders.

A picture of Mandela was beamed onto the wall above the pulpit, highlighting the enormous changes in South Africa, which elected Mandela as its first black president in an all-race vote in 1994.

The Rev. Niekie Lamprecht, pastor of the Dutch Reformed Church of Pretoria East, said Mandela was the driving force behind changes of attitude in the congregation's overwhelmingly white parishioners.

"He said, `Let's forgive,' and he forgave. That created a space for people to feel safe ... at a time when the expectation was that there was going to be a war," Lamprecht said.

After the stadium memorial on Tuesday, Mandela's body will lie in state at the Union Buildings, the seat of government in Pretoria, from Wednesday to Friday, followed by the burial in Qunu.

Torchia reported from Cape Town, Gambrell from Johannesburg, Straziuso from Qunu, and Clendenning from Pretoria. Ray Faure in Johannesburg also contributed to this report.

© 2013 The Associated Press. All rights reserved. This material may not be published, broadcast, rewritten or redistributed. Learn more about our Privacy Policy and Terms of Use.