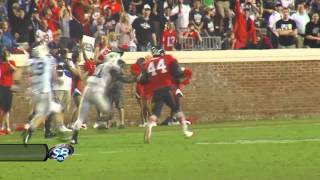 Great to Good: 1 of 4 plays that changed BYU's season 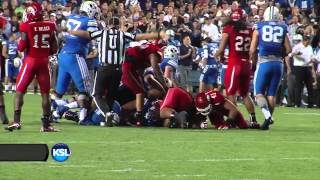 Great to Good: 2 of 4 plays that changed BYU's season 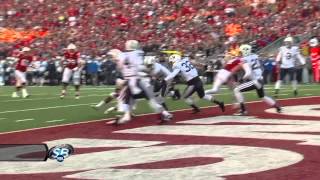 Great to Good: 3 of 4 plays that changed BYU's season 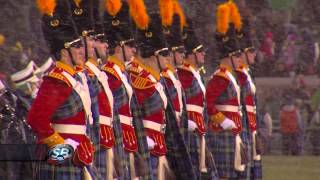 Great to Good: 4 of 4 plays that changed BYU's season

PROVO — BYU finished the regular season on Saturday with a 28-23 win over the Nevada Wolf Pack to finish the season 8-4 — a very good record versus a very tough schedule.

However, in each of those four losses, I remember a specific play that turned the tide of the game, which could have potentially led to a win instead of a loss.

Before the season began, on our radio show Cougar Sports Saturday, Alex Kirry and Jason Shepherd were vacationing while I was working. Jeremiah Jensen was gracious enough to fill in for the day and we started to make predictions for the 2013 season.

BYU was staring their most difficult schedule, ever, square in the face. Dissecting the game-by-game matchups we saw a season-opening game on the road against Virginia with a brand new offense — loss number one.

That was just the first five games of the season — the lone victory coming over Middle Tennessee.

We were scared by Georgia Tech's running game and Houston's passing game — losses five and six. BYU had never beaten Boise State, so that was loss number seven. Eight was on the road at Camp Randall Stadium in Wisconsin and nine was at Notre Dame Stadium in South Bend.

1st of 4 plays that changed BYU's season
Play No. 1

Like I said, we took a trip down a dark path.

But this 8-4 season feels a little mediocre. Here are four plays that cost BYU a great season.

2nd of 4 plays that changed BYU's season
Play No. 2

Hanging onto a 16-12 lead late in the fourth quarter, Taysom Hill threw a ball that got tipped by Jamaal Williams and intercepted by Virginia. The Cavaliers would score with 2:36 left in the game, handing BYU its first loss of the season, 19-16.

Play No. 2: Jamaal Williams concussion and shoulder stinger vs. Utah

3rd of 4 plays that changed BYU's season
Play No. 3

BYU had two drives in the final three minutes of the game and couldn't score. But it was Jamaal Williams leaving the game on a stretcher — after suffering a concussion and shoulder stinger in the third quarter — that ended the Cougars' chance to defeat their rival.

Play No. 3: Wisconsin scores with 14 seconds remaining in the first half

BYU was hanging tough in the first half against 21st-ranked Wisconsin. But just before the first half ended, Wisconsin scored on a short touchdown throw to James White to take a 17-3 lead — and the hope from BYU's soul.

Play No. 4: Kickoff at Notre Dame and a seven degree wind chill

Blame it on the weather. Hill struggles mightily in the passing game when the weather is bad.

4th of 4 plays that changed BYU's season
Play No. 4

The three poor weather games — Virginia, Texas and Notre Dame — had Hill completing 42 percent of his passes. In poor conditions, Hill could only squeeze out a pair of touchdowns; those were trumped by three interceptions.

In the coldest game at Notre Dame Stadium since 1991 — 26 degrees and a 7 degree wind chill — the Cougars were beaten down by the elements. I can hardly blame them. I was standing on those frigid sidelines, dressed in my ski coat/pant combo and I was miserable. But the Fighting Irish used the miserable home-field advantage to win 23-13.

Was it a lack of talent or experience that led to these lapses? We'll likely find out the answer to that question in 2014.