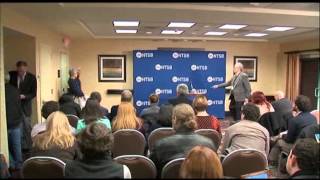 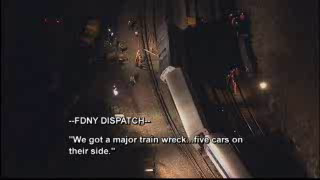 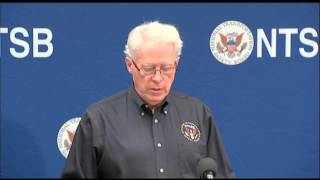 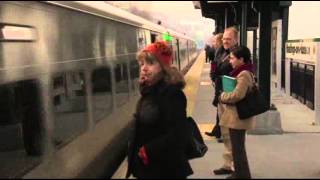 YONKERS, N.Y. (AP) - An engineer whose speeding commuter train ran off the rails along a curve, killing four people, nodded at the controls just before the wreck, and by the time he caught himself it was too late, a union official said Tuesday.

"He had the equivalent of what we all have when we drive a car," Bottalico said. "That is, you sometimes have a momentary nod or whatever that might be. How long that lasts, I can't answer that."

Rockefeller's lawyer did not return calls. During a late-afternoon news conference, federal investigators said they were still talking to Rockefeller, and they wouldn't comment on his level of alertness around the time of the Sunday morning wreck in the Bronx.

Separately, however, two law enforcement officials said the engineer told police at the scene that his mind was wandering before he realized the train was in trouble and by then it was too late to do anything about it. One of the officials said Rockefeller described himself as being "in a daze" before the wreck.

The officials, who were briefed on the engineer's comments, weren't authorized to discuss the investigation publicly and spoke on the condition of anonymity.

Questions about Rockefeller's role mounted rapidly after investigators disclosed on Monday that the Metro-North Railroad train jumped the tracks after going into a curve at 82 mph, or nearly three times the 30 mph speed limit. Dozens of people were hurt.

"He caught himself, but he caught himself too late. ... He powered down, he put the train in emergency, but that was six seconds prior to derailment," Bottalico said.

Rockefeller, who was operating the train from the front car, was treated at a hospital for minor injuries and was released.

National Transportation Safety Board member Earl Weener repeated that it was too soon to say whether the accident was caused by human error. But he said investigators have found no problems with the brakes or signals.

Alcohol tests on the train's crew members were negative, and investigators were awaiting the results of drug tests, the NTSB official said.

On the day of the crash, Rockefeller was on the second day of a five-day work week, reporting at 5:04 a.m. after a typical nine-hour shift the day before, Weener said.

"There's every indication that he would have had time to get full restorative sleep," Weener said.

Weener didn't address specifically what the engineer was doing in the hours before his shift started but said part of the investigation will be creating a 72-hour timeline of his activities.

Bottalico said Rockefeller "never said anything about not getting enough sleep." But he said the engineer had switched just weeks earlier from the night shift to the day shift, "so he did have a change in his hours and his circadian rhythms with regard to sleep."

The New York Police Department is conducting its own investigation, with help from the Bronx district attorney's office, in the event the derailment becomes a criminal case.

Rockefeller, meanwhile, stayed out of sight. But his union and former co-workers spoke up in his defense.

"This is a man who is totally distraught by the loss of life, and he's having a tough time dealing with that," Bottalico said.

He added: "Once the NTSB is done with their investigation and Billy is finished with his interview, it will be quite evident that there was no criminal intent with the operation of his train."

Gov. Andrew Cuomo said Tuesday the engineer could be faulted for the train's speed if nothing else.

"Certainly, we want to make sure that that operator is disciplined in an appropriate way. There's such a gross deviation from the norm," he said.

Steven Harrod, a University of Dayton professor who studies transportation, said that trains typically don't have a speed or cruise control but a power control, and once it's set a train can pick up speed on its own because of the terrain.

"Thus, if the engineer loses attention, the train can gain speed without intervention," Harrod said. "The power control could have been set" as the train left a station, "and then forgotten by the engineer."

In case of an engineer becoming incapacitated, the train's front car was equipped with a "dead man's pedal" that must be depressed or else the train will automatically slow down.

Trains also can have alarms, sometimes called alerters, which sound if the operators' controls haven't been moved within a certain timeframe. If an engineer doesn't respond, often by pressing a button, brakes automatically operate. But the Metro-North train that derailed didn't have such a system, according to Marjorie Anders, a spokeswoman for Metro-North's parent, the Metropolitan Transportation Authority.

Regardless, "neither of those two methodologies is truly a fail-safe approach," said Grady Cothen, a former Federal Railroad Administration safety official. Congress has ordered commuter and freight railroads to install technology called positive train control _ which uses electronics to monitor trains' positions and speed and stop derailments and other problems _ by the end of 2015.

Rockefeller, 46 and married with no children, has worked for the railroad for 15 years and has been an engineer for 10, according to Weener. Rockefeller lives in a well-kept house on a modest rural road in Germantown, N.Y., about 40 miles south of Albany.

He started as a custodian at Grand Central Terminal, then monitored the building's fire alarms and other systems, and ultimately became an engineer.

"He was a stellar employee. Unbelievable," said his former supervisor, Michael McLendon, who retired from the railroad about a year ago.

McLendon said he was stunned when he heard about the crash, shortly after opening his mail to find a Christmas card from Rockefeller and his wife.

"I said, `Well, I can't imagine Billy making a mistake,'" McLendon said. "Not intentionally, by any stretch of the imagination."

Rockefeller's work routine had recently changed. He had begun running that route on Nov. 17, two weeks before the wreck, Anders said.

Bottalico said Rockefeller was familiar with the route and qualified to run it.

Bruno Lizzul, an MTA machinist who met Rockefeller when they both worked at Grand Central around 2000, described the engineer as honest, hard-working and helpful _ so much so that he took it upon himself to show up and help Lizzul renovate his home ahead of a baby's arrival.

"He went the extra yard. He just decided to extend himself to me," Lizzul said.

Lizzul said Rockefeller was very serious about his work: "He would not do anything to upset anybody or in any way cause harm."

Meanwhile, crews were rebuilding the damaged track. Officials expect 98 percent of service to be restored to the affected line Wednesday, Cuomo said.