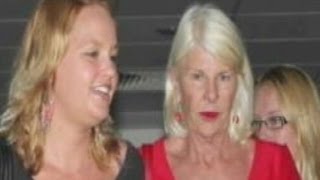 CHARLESTON, S.C. (AP) - A woman accused of abducting her infant daughter from South Carolina 20 years ago has been located in Australia and is facing extradition back to the United States to face charges, federal authorities announced this week.

On Thursday, U.S. Attorney Bill Nettles said that an indictment had been unsealed charging Dorothy Lee Barnett, 53, with international parental kidnapping and making a false statement on a passport application.

Barnett did not have custody of her then 10-month-old daughter when she left in 1994 from Isle of Palms, Nettles said. At the time, police said Barnett left for a birthday party with her daughter and never returned. In 1993, she had filed for divorce from her husband, Bowling Green, Ky., native and former Charleston stockbroker Benjamin Harris Todd III.

Authorities said Barnett was located in Australia earlier this month and had been living under several aliases.

Federal authorities have not given details on how they tracked Barnett down. In a news release, Nettles said federal law enforcement agencies from the U.S. and Australia cooperated on the case.

Court papers show that an arrest warrant was issued for Barnett in 1994.

Barnett has been denied bond pending extradition back to the United States, where no court date has been set, Nettles said. If convicted on all charges, she could face more than 20 years in prison, and court papers listed no attorney for her.

Australian Justice Minister Michael Keenan, who must approve any extradition request, said Barnett appeared this week in a court at Maroochydore, a coastal tourist strip north of the Queensland state capital Brisbane.

"As the matter is before the court, it would not be appropriate to comment further," he said in a statement Saturday.

The Australian Federal Police declined to comment on the case.