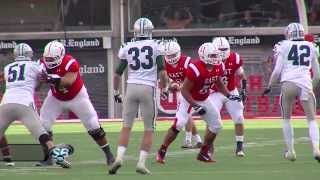 East defeats Olympus 47-21 to advance to 4A championship 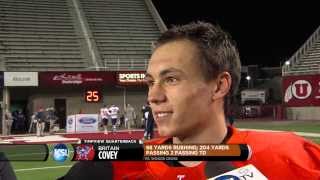 4A semifinals: Timpview rolls over Woods Cross for shot at the title

SALT LAKE CITY — Lorenzo Manu returned an interception 26 yards for a touchdown in East's 47-21 win over Olympus in the 4A semifinals. When he crossed the goal line there was only one thing on his mind.

"I started thinking about my grandpa," he said. "I play this game for him. I play every game for him from now on."

Lorenzo has dedicated the season to his grandfather who passed away earlier this year. The junior defensive back leads the entire state in interceptions with 11 and is one of several talented players on the Leopards roster who are one win away from the school's first football championship in 17 years.

There is reason for confidence, East has been dominant this year. They are 13-0 and have defeated their opponents by an average of 35 points. Defensively they are led by Stanford commit Christian Folau who has 142 tackles and 11.5 sacks.

The Leopards can score on both sides of the ball and average 50 points per game. The offense features Wisconsin commit Ula Tolutau who has rushed for 2,344 yards and 30 touchdowns. He is just one of many weapons on the East offense that Timpview will have to deal with on Friday.

"He's ready to carry the ball 30 times in a game," East head coach Brandon Matich said about his big, bruising running back. "He can grind it out with you and he'll wear you down. We're ready for that as well and we're okay to play that way."

If there is a defense in 4A ready to matchup with the size and speed of East, it is Timpview.

The Thunderbirds have been overshadowed by the No. 1 ranked Leopards all year, but they are the defending state champions and will get their shot at East and a chance to defend that title.

It all starts with defense for Timpview. The Thunderbirds give up just 12 points per game and have been terrific all year at forcing turnovers and scoring defensive touchdowns. Isaiah Nacua and Gabe Reid have combined for 31.5 sacks and Pio Stowers and Emmet Tela have combined for nine interceptions.

"It takes so much pressure off," said Timpview quarterback Britan Covey. "Our defense has been doing that all year. I don't think they realize what a big help that is to us as an offense. It's amazing."

"I think that's just a product of speed and athleticism and hard play on defense," said head coach Cary Whittingham.

East's high scoring offense versus Timpview's dominant defense may be the most interesting matchup in this game, but the turnover battle will likely determine what team takes home the trophy.

Both teams are terrific at forcing turnovers and scoring touchdowns on defense and special teams. When these two teams met in last year's 4A semifinals, Timpview forced East to turn the ball over several times in the snow and it was a major factor in the Thunderbirds victory.