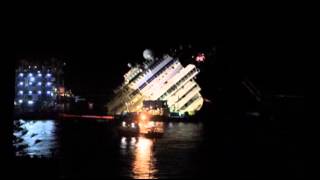 ROME (AP) — Panicking crewmen in the engine room of the rapidly flooding Costa Concordia repeatedly tried to convey to their captain how badly crippled the cruise ship was after it slammed into a reef, but their dramatic assessments apparently failed to convince the commander to promptly order the luxury liner's evacuation.

The captain, Francesco Schettino, is on trial in Grosseto, Tuscany, on charges of manslaughter, causing the 2012 shipwreck and abandoning the vessel before all others aboard were evacuated. Thirty-two people died in the crash. He risks 20 years in prison if convicted.

The Italian court trying Schettino listened Tuesday to a recorded conversation between engine room personnel and the captain after the luxury liner was speared by the reef when it sailed close to the rocky coastline of Giglio island, off the Tuscan coast.

The call from an engine room official was logged at 10:09 p.m., or almost 25 minutes after the crash. Despite the crew telling Schettino the hull had been gashed and water was rushing in, the evacuation was only ordered about an hour after the collision.

The recording of the call was played at the prosecutor's request.

Schettino was heard saying `'OK" a couple of times to the frantic engine room personnel, but appeared not to immediately grasp that the collision and resulting rushing in of sea water had knocked the ship's engines out of commission.

'But where did we hit?" Schettino asked the head of the engine room, Giuseppe Pillon. Pillon replied that the collision ripped open a side of the hull, and said'all is lost," referring to the generators. Pillon also told Schettino that the main circuit breaker panel was full of water.

Engine room official Hugo Di Piazza, who testified on Tuesday, described how the water rushed into the part of the ship below the waterline, including through a supposedly water-tight compartment.

Asked by the court if there was panic in the engine room, Di Piazza said: `'When you have water at your feet that means ...that you are risking your life."

Di Piazza testified the `'water was arriving in waves" and that the first emergency exit he tried to use didn't open so he had to find another way upstairs.

`'We stayed in the engine room, waiting for the signal to abandon ship," he said, adding that that signal arrived approximately 30 minutes after he realized the lower part of the ship was flooding.

Although Schettino appeared in the recording not to have immediately grasped how crippled the ship's engine and electrical capabilities were, testimony on Monday indicated he was immediately aware after Concordia shuddered with a jolt after hitting the reef that he had a grave problem on his hands.

An officer-in-training on the bridge during the collision, Stefano Iannelli testified Monday that Schettino exclaimed: `'What did I do? I'm finished navigating" as a captain.

Schettino had claimed that the reef wasn't on the ship's nautical charts and that he left the ship while others were still aboard so he could better direct the evacuation while on the island.

Hours after he jumped onto a lifeboat, helicopters rescued some passengers stranded on the capsized ship. Other passengers and crew jumped into the sea to swim to the island, and some of them drowned.