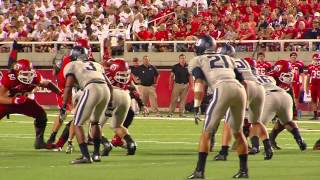 SALT LAKE CITY (AP) - It's not as easy as it used to be, but Travis Wilson made sure Utah is back to beating Utah State again.

Wilson threw for 302 yards and two touchdowns to help Utah edge Utah State 30-26 in the season-opener on Thursday night.

"We had no doubt. We knew we were going to win this game," said Wilson.

He said he told the team as much even when the Utes trailed by 11 points.

Wilson, a sophomore who was unexpectedly pressed into a starting role because of injuries last year, was named a captain this month and played error-free while completing 17 of 28 passes and rushed for a key first down on Utah's final drive.

Last season, the Aggies snapped a 12-game skid against the Utes, 27-20 in overtime, and used the game as a springboard to a school-record 11-2 record. Many Utes acknowledged the early season loss put a damper on their entire season.

This time around, Utah made the crucial plays.

Chuckie Keeton, who completed 31-of-40 passes for 314 yards, scored on a 15-yard run to give the Aggies a 23-14 lead early in the second half and the visiting Aggies fans' cheers echoed in the suddenly quiet stadium.

"We could have folded our tent right there. A lot of teams would have. But our guys kept coming. They kept fighting, kicking, scratching, clawing -finding a way to win the game," Utah coach Kyle Whittingham said.

Utah 30, Utah State 26
It was over when
Aggie quarterback Chuckie Keeton's final desperation heave fluttered high above his intended receiver and landed harmlessly in the end zone as time expired. Call of the Game
After converting on a 45-yard field goal to pull within six, Utah special teams coach Jay Hill dials up an onside kick in the third quarter in which the Utes recovered. Five plays later, Karl Williams scored on a two yard touchdown run to take a one point lead, 24-23. Quotable
"To be honest, it's a little surreal. I can't believe the game is over and this has actually happened. I didn't realize how big of an impact something like an onside kick or a field goal can make." -Utah kicker Andy Phillips, a five time member of the US Ski Team, after going 3-3 FGs and 3-3 PATs and even added an onside kick in his first ever football game

The Utes roared back.

Andy Phillips kicked a 45-yard field goal and then Karl Williams, who lost a fumble earlier in the third quarter, recovered the ensuing onside kick.

Playing in his first football game at any level, Phillips, a former soccer player and U.S. Ski Team member, was given the game ball for the onside kick and his three field goals.

"Phillips nailed some huge kicks. His onside kick changed the momentum and he was our player of the game tonight," Whittingham said.

Williams was determined to make up for his error and finished the drive with a 2-yard touchdown rush. Utah then led 24-23.

"After I fumbled the ball, the coaches gave me a second chance and I was so glad I was able to take advantage," Williams said.

Keeton led USU on a 68-yard drive that stalled when he had to leave the game for a play near the goal line because of an apparent cramp. Diaz made a 24-yard field goal to put the Aggies ahead 26-24 with 11:20 remaining.

The Utes were hampered by a lack of big-play ability in a 5-7 campaign last season, but in this game Utah thrived on plays like Wilson's 35-yard pass to Denham that led to Phillips kicking a 19-yard field goal with 6:38 to play. Utah edged in front, 27-26.

"We kept our confidence up. We were able to make some big plays downfield that set us up well for our touchdowns," said Wilson after his second career 300-yard passing game.

Denham became Wilson's favorite target and set career highs with six receptions for 113 yards after Kenneth Scott was lost for the season, according to the school, with a lower leg injury early in the game.

After finally reining in Keeton on the next drive and forcing a punt, the Utes diverted from their no-huddle, hurry-up offense and rushed nine straight times which caused the Aggies to take all three of their timeouts. Wilson converted a key third-down with a determined keeper up the middle to keep the clock running. Phillips capped the drive with a 38-yard field goal with 19 seconds left.

"To be honest, it's a little surreal," Phillips said. "I can't believe the game is over and this has actually happened. I didn't realize how big of an impact something like an onside kick or a field goal can make."

The Aggies had time for just two plays and Keeton's final pass fluttered high above his intended receiver and landed harmlessly in the end zone.

"There's always going to be adversity in every single game. I guess that was it. It's really how you respond to that adversity. We didn't exactly respond really good," Keeton said.

"We knew it was going to be an exciting game, down to the wire. They just made one more play than we did," new USU coach Matt Wells said after his debut.

Utah State entered the season on a seven-game winning streak, tied for fourth longest in the nation. In the midst of their best stretch in 50 years, the Aggies have won 16 of their last 20 games and the four setbacks are by a combined 10 points.