It's over. And though an 8-5 season isn't the best in BYU's books, it's a winning season nonetheless.

Now comes the hard part — looking ahead. While many, including head coach Bronco Mendenhall, say they'll celebrate the Poinsettia Bowl win as long as they can, BYU's future in football is uncertain in direction.

BYU just finished its second season in independence, but rumors continued to rapidly spread over potential transitions in the next few years — the Big East? Back to the Mountain West? 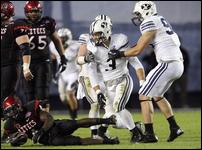 The 2012 BYU football season was filled with ups and downs, as well as controversy. Regardless of what happened between September and November, the Cougars ended December with an impressive win over SDSU in the Poinsettia Bowl.

"Independence has been a very positive move for our program," said Mendenhall. "The national landscape of college football is changing dramatically with defections from conference, realignments at the expense of natural rivalries, regional rivalries, all kind of for the sake of security and money, I think. We have distinguished ourselves with a very unique institution that is a private institution. It's faith-based, and we have very specific morals and values excluding and including Sunday play and lack thereof.

"We're kind of on the outside right now, out of the fray, watching it all happen, but in the meantime growing our program and winning football games, and the schedules will continue to get more difficult, the exposure will continue to increase, which means that I have to continue to develop the program and improve myself and our players to perform on the biggest stages."

Looking back at the season, the Cougars fought with every ounce of skill and courage they possessed, taking games right down to the wire, either winning or not.

Mendenhall said that'll be the case moving forward — there won't be any backing away from competition or exposure. Every member of the team, from the players to the coaching staff, will have increased demands.

In addition to whichever conference the Cougars end up in is the future of the team itself, the players themselves.

BYU entered the 2012 season with 27 seniors, and now those fellows, in addition to a few others, are gone. Some of the top performers of the best defense in the history of BYU? Gone. Two of the five quarterback options? Gone. NFL draft potentials? Gone, and hopefully to the NFL.

Ezekiel Ansah, Brandon Ogletree, Riley Stephenson — players who had such an amazing impact on both Cougar wins and losses leave for the real world, and BYU is forced to move on.

"It'll be a challenge, certainly, for the 27 seniors that are leaving," Mendenhall said. "But what I've come to understand is BYU football is bigger than myself as the head coach, and is bigger than any single player. There are really strong core values, really strong expectations and a really strong organization … and anyone that's lucky enough to join the program, I think, will get the most out of it."

Come 2013, the Cougars will face a new year with a new team, new goals and a growing program, just like every other football team.

"Right now I'm not interested in looking ahead yet, I'm looking forward to just celebrating with seniors and the players of this team," Mendenhall said.