PROVO — Brigham Young University clarified changes to the Honor Code that led to "much discussion and some misinterpretation" in a letter the university tweeted on Wednesday.

"One change to the Honor Code language that has raised questions was the removal of a section on 'Homosexual Behavior.' The moral standards of the church did not change with the recent release of the ... updated Honor Code. There is and always has been more to living the Lord's standard of a chaste and virtuous life than refraining from sexual relations outside of marriage. Lasting joy comes when we live the spirit as well as the letter of God's laws," the letter from Elder Paul V. Johnson, commissioner of the Church Educational System, reads.

The letter explains that marriage between a man and woman is "ordained of God and that the family is central to the Creator's plan for the eternal destiny of his children," according to teachings of The Church of Jesus Christ of Latter-day Saints, which owns BYU.

"Same-sex romantic behavior" is not compatible with the principles of the Honor Code, the letter continues.

The school updated its Honor Code in late February in conjunction with a new handbook released by the church the same day.

The church's new handbook, which offers guidelines for church leaders, takes a more adaptable and "ministerial" approach to administrative procedures. The update to the Honor Code was made in an effort to "be in alignment with the doctrine and policies of the church," a news release from the school reads.

As part of the code's update, the school removed the section on "homosexual behavior," which previously stated that "homosexual behavior is inappropriate and violates the Honor Code." While "same-gender attraction" is not an Honor Code violation, all forms of physical intimacy "that give expression to homosexual feelings" are violations, the old code read.

The Honor Code now simply requires students to abstain "from any sexual relations outside a marriage between a man and a woman," among other requirements that existed before the change.

Q&A with the director of BYU’s Honor Code Office

In a question-and-answer interview with the university, BYU’s honor code office director Kevin Utt said the language of the honor code was updated to create a single standard for all church-owned colleges and universities.

“We realize that emotions over the last two weeks cover the spectrum and that some have and will continue to feel isolation and pain,” Utt said. “We encourage all members of our campus community to reach out to those who are personally affected with sensitivity, love and respect.”

Utt clarified that “any same-sex romantic behavior” violated the honor code, but that the code’s principle to “encourage others in their commitment to comply with the honor code” does not necessarily mean to “turn someone in.”

“Encourage is an action that means to give support, confidence or hope to someone,” Utt said. “We are all members of the BYU community — thousands of people coming together to develop faith, intellect and character, and we should always reach out in love and support to those around us.”

Not long after the February update was pushed online, BYU students took to social media wondering if dating members of the same sex was no longer a violation of the Honor Code since the code only details "sexual relations" outside a marriage between a man and woman.

The school tweeted later in the day, however, saying there may have been some miscommunication as to what the Honor Code changes mean. 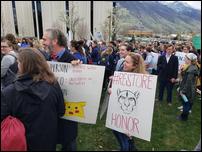 Brigham Young University has attempted to clarify changes made to the Honor Code — and what those changes mean for LGBT students — after the school removed the section on "homosexual behavior" from the university's code of conduct.

Several responses to the university's tweets conveyed confusion about what the change meant, some asking the university to "use your words! Tell us what it means!" or "correct any of the misinformation." The university did not respond to specific replies to its tweets.

Not long after the change gained traction on social media, a Twitter account called "SaveBYU" was created and tweeted out a mission to "take back our University and #saveBYU."

The account expresses disapproval with the way some students interpreted the Honor Code and tweeted the pictures of the happy students in front of the Honor Code Office and the two women kissing with the caption, "Sorry, we just can't stand for this. #savebyu."

Jesus is an ally 🌈 pic.twitter.com/OQfKYmAAHO

The group or individual claimed to have spread copies of the proclamation across campus, and tweeted out the letter from Elder Johnson with the caption, "WE WON."

Shortly after BYU’s email arrived in thousands of inboxes across campus, students began planning a counter-protest on the university’s main quad outside the Wilkinson Student Center.

The message spread via social media, and by 1 p.m., more than a hundred students had gathered to march, chant, hold signs and band together during what many considered to be an emotional day for members of the LGBTQ community.

They even held a “lay down,” a moment of silence for those in the community who have lost their lives by suicide.

“It was very fast,” said Cassandra, a 25-year-old senior at BYU who declined to give her last name out of fear of retribution from the university. “Some people brought food, a few people brought signs, and think it kind of grew as we started walking.”

One of those students who joined in was Kristian Huff, a 24-year-old senior in BYU’s musical theater program who saw the protest begin as he was leaving class.

When he saw the protestors, he felt strongly compelled to join them — to show his support for what he considers to be a marginalized community on campus.

“What’s amazing about this is seeing the hundreds of people who have come out today; it shows there is a much larger demographic than was once anticipated,” said Huff, who does not identify as gay, bisexual or transgender but considers himself an ally. “That should be a sign to the administration, as well. You aren’t talking to 20 or 30 kids in the whole school. It’s hundreds of kids who are of that community. They aren’t being represented."

The presumed changes to the honor code felt like a breath of fresh air to BYU’s LGBTQ community. Huff said he was “thrilled” to see movement towards a more inclusive campus community, while still maintaining standards of the school’s sponsoring church — including upholding the law of chastity, which forbids sexual relations before or outside marriage.

“Although I understand that the school is church-affiliated, and they have doctrines … I do think that the school as an educational system should have more leniency,” Huff said. “There are many people here who aren’t of this faith, and there should be more openness, in my mind.”

Since the changes to the wording of the honor code policy, several BYU students have come out as lesbian, gay, bisexual or transgender. They’ve posted photos on social media with a significant other, often of the same gender.

“A ton of people feel unsafe, like they could have disciplinary actions thrown at them,” he said.

For many, the clarification had little impact on their daily lives. For others, the letter prompted disappointment — at best, or fear — at worst.

“I can’t speak for everyone; I know a lot of people are more angry than others,” said Cassandra. “We just want to feel safe and accepted here for who we are, and not for the box that we are all supposed to be put into.”

The letter elevated a culture of fear around campus, Cassandra said — one she and others hoped could be alleviated by gathering together in peaceful protest.

“But I think there’s a lot of disappointment. Most of us probably love this university. We came here because we love the rules, the people and the culture. But this back-and-forth, playing with our lives and our happiness, is not OK. There’s disappointment. Anger."

“We just want to fight this fear culture. It’s not safe. It’s not OK,” she said.