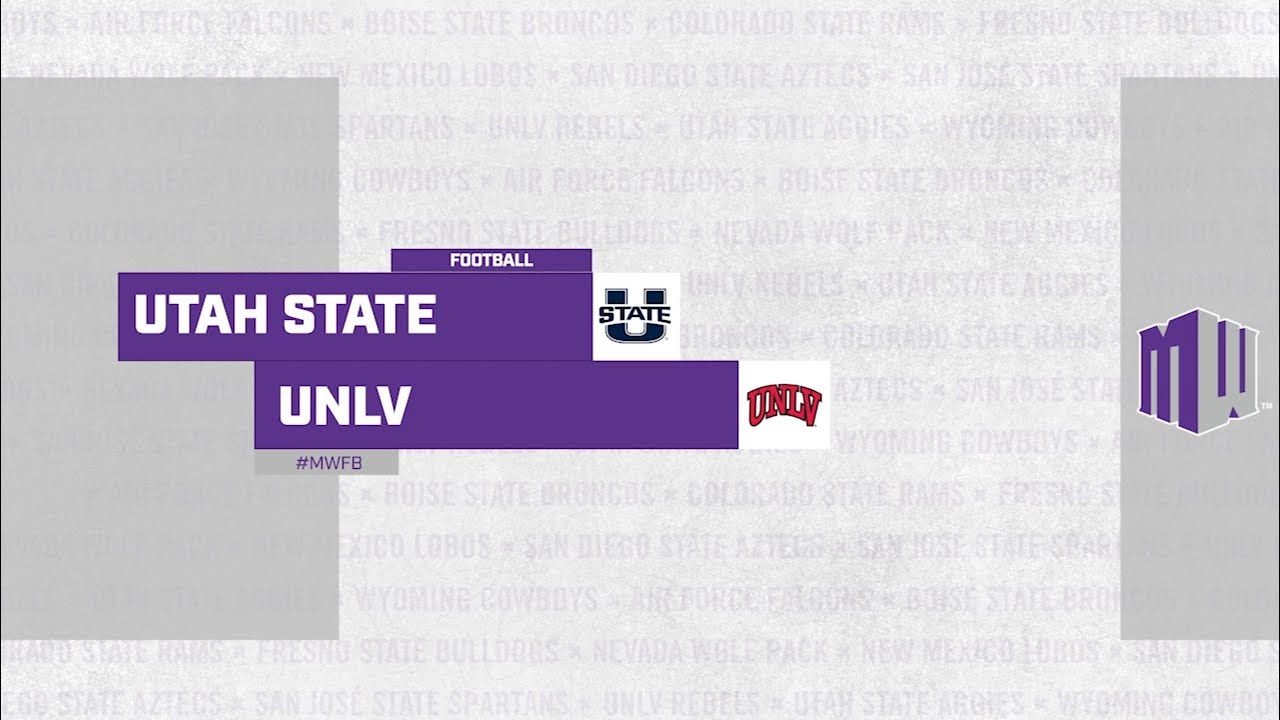 LOGAN — Elelyon Noa ran seven times for 38 yards for Utah State against UNLV on Saturday night. But none of the Aggies' 142 rushing yards were bigger than the 11-yard sprint Noa had with 35 seconds remaining.

Noa's late touchdown help the Aggies rebound from a home loss and escape Las Vegas with a 28-24 victory over UNLV, improving the Aggies to 4-2 on the season with a 2-1 record in Mountain West play.

Logan Bonner completed 21-of-32 passes for 298 yards and two touchdowns, both of them to the teams' leading receiver Deven Thompkins. The 5-foot-8 wide receiver caught 12 passes for 180 yards, while Derek Wright added 83 yards from 5 receptions.

The Rebels came into Saturday night's contest having lost 11-straight games — the second longest active streak in the county, dating back to a Nov. 11, 2019 win over Nevada.

But when a team is struggling to find ways to win, they only can play as if there is nothing to lose; and that is exactly how UNLV opened the game.

The first half was defined by a series of big plays after UNLV received the ball at kick off and knocked in a field goal on the first possession.

Utah State answered back on their own first possession when UNLV elected to send a kick off to senior Savon Scarver. After catching the ball just barely in the end zone and getting two good blocks to open up the whole left sideline, Scarver exploded for a 100-yard return for the seven of his career, tying the NCAA record for most all-time.

The Vegas kid just tied the NCAA record for kickoff return touchdowns in a career with 7️⃣‼️#AggiesAllTheWay | @SavonScarverpic.twitter.com/OfwklsaXaa

On the ensuing possession and on the first play of UNLV's drive, senior running back Charles Williams made an impressive run of his own, dodging all Aggie defenders while running up the middle and escaping for a 75-yard touchdown just 14 seconds after the previous score.

Williams was the horse behind the Rebels' offense, running for a career high 226 yards on 27 attempts and running in all three of his teams' touchdowns.

UNLV's Cameron Oliver halted the Aggies second possession after intercepting Bonner's pass at the UNLV 41-yard line and returning it back to the opposite 14-yard line. Four plays later, Williams ran in for his second touchdown of the game, extending the UNLV lead 17-7, putting Utah State in a deficit they have been accustomed to this season.

Although the Aggies' passing game was effective in the first half, totaling 223 yards in the air over UNLV's 72, the run game was nonexistent. Both teams in the first two quarters had 17 rushing attempts, but the Rebels ran for 143 yards to the Aggies' 21.

The stagnant run game was brought to an end when Utah State started with the ball to open the second half. The Rebels — again — decided to kick off to Scarver, who had a 32-yard return to the 40-yard line. On the first play of the drive, Calvin Tyler, Jr. rushed for 27 yards to bring some life to the run game.

On the same possession, Tyler would run for another 18-yard gain to set up Tompkins for a 6-yard touchdown pass from Bonner.

After Williams scored his third touchdown of the game at the 8:18 mark in the middle of the third quarter, Utah State struggled to convert anything on offense.

On two different possessions in the fourth quarter, the Aggies managed to find themselves on the UNLV 17 and 24-yard lines, but because late penalties, sacks and incomplete passes, they would be brought back and have to settle for long 44 and 41-yard field goal attempts — one missed wide right and the other blocked.

But each time the Aggies gave the ball away to the Rebels, the defense continuously found ways to give opportunities for the offense to try again.

On UNLV's offensive possessions in the fourth quarter, they were held to a three-and-out series, threw an interception, and held again to another three-and-out series, giving the Utah State offense one last chance to either tie the game with a field goal or get a late lead with under 3 minutes left in the game.

After gaining possession on their 40-yard line, and following several short yard gains, Bonner found Wright for a 16-yard and 14-yard reception on back-to-back plays, setting up Noa for an 11-yard run into the end zone that would decide the outcome of the game.

Even after five fumbles — none which were lost, eight penalties giving up 55 yards and allowing Williams to have a career game, the Aggies were able to successfully complete the fourth comeback of the season, even if it was against the worst team in the Mountain West.