WEST VALLEY CITY — A West Valley woman has been arrested in connection with a fatal hit-and-run accident that claimed the life of a 2-year-old boy in a stroller in June.

Investigators say information provided by an ex-boyfriend led to the arrest of Kimberly Munoz, 21.

On June 10, Angela Barnett was walking home from the store about 9:45 p.m. with her two young children. She was pushing 2-year-old Gavyn Barnett in a stroller across 5600 West near 4005 South, when a car hit the stroller.

The driver pulled over for a moment but then kept driving, according to West Valley police.

Sunday night, officers received a tip from a man claiming that his brother had information about the accident. Investigators interviewed the brother, who was the ex-boyfriend of Munoz.

Detectives later interviewed Munoz and then arrested her for investigation of hit-and-run and improper lookout.

"She said she was scared," Hauer said of Munoz's reason for allegedly leaving the scene. He said he didn't know if distracted driving was a factor or whether the woman saw the stroller.

Munoz "admitted to not having glasses on while driving," according to a Salt Lake County Jail report. The report did not say if Munoz was required to wear glasses while driving. 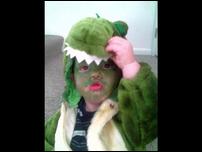 The mother of 2-year-old Gavyn, who died Tuesday morning after being struck by a car Monday night, is asking the driver who fled the scene to turn themselves in.

According to police, she told investigators she hit an "unknown object," stopped, and saw a stroller and pedestrians in her rearview mirror. She admitted to "being scared" and driving off, the report states.

Detectives were also looking Monday at whether the ex-boyfriend and some of Munoz's family members could potentially face obstruction charges for allegedly knowing about the accident but failing to tell police.

The vehicle Munoz was driving was also seized on Sunday.

Hauer said investigators are happy to be able to bring some closure for Gavyn's family. In June, Barnett made a public plea for the unknown driver to surrender.

"I would say if you have any information on what happened … can you please come forward and let me know and turn yourself in?" she said while wiping back tears.

"Because I lost my little boy due to that little accident and I won't ever have him back, and there's a hole in my heart because of it. So if you have any information, please, please don't hesitate to come forward."