SALT LAKE CITY — Lunch with Dennis Rosinlof is always the same: He's been eating a Big Mac from McDonald's for 30 years.

He conservatively estimated he has eaten 12,000 Big Macs in the past 30 years.

He started eating Big Macs when he began his sales career, he said. He has been working as a salesman at R.C. Willey for most of his professional life.

For the past 20 years, he said he has been eating at McDonald's at least 10 times a week and he never gets tired of it.

"I look forward to going to McDonald's every single time," Rosinlof said.

On Mondays he said he stops by McDonald's on the way home from flying planes. He eats one on Wednesdays and two a day on Tuesdays, Thursdays, Fridays and Saturdays. On Sunday, he said he takes a break.

Rosinlof's wife of 37 years, Lauri, is a registered nurse. She and their kids encourage him to eat healthier, but at 64 years old, six feet tall and 165 pounds with a cholesterol level under 200, they said they let him be himself.

Rosinlof said he thinks the state of his health has to do with calories. He said a Big Mac meal is 930 calories, so if he eats two a day that is still less than 2,000 calories and he doesn't eat much more than that. 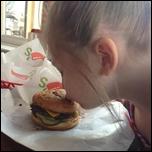 Employees at the Chili's Grill and Bar restaurant in Midvale made a little girl's day when they fixed her "broken cheeseburger."

"I don't think I'm addicted, but I do feel my body understands what's coming, when it's coming and knows what it has to make to get rid of a Big Mac. I think that might be one reason why Big Macs and I get along so well," Rosinlof said.

He said his life took turn after he went to Orem High School and volunteered to serve in Vietnam.

Rosinlof said he didn't know anything about medicine.

"The only thing I could think of was I couldn't give anybody a shot," he said.

Rosinlof said he jumped into the training and became a medic who even earned special recognition for valor. The first-time Medic returned home and became a first-time Sky diver, eventually becoming a "jump master" and later an "instructor."

"By the time I had 200 jumps, I was as relaxed in free fall as I am right now," Rosinlof said.

With all his accomplishments in life, eating 12,000 Big Macs still seems to be an impressive feat.