After two weeks of a physical fall camp, which officially ends Wednesday, the players decided they're done hitting their teammates and are ready to hit somebody else.

"Oh man. We talk about it in the locker room all the time," said defensive tackle Hale Motu'apuaka after the scrimmage. "We cannot wait to play against someone else. We can't wait to go to Pullman to play Washington State."

But the Aggies still have work to do, according to head coach Blake Anderson.

"It has been two weeks of grinding and I thought we looked tired today," Anderson said. "There was good and bad on both sides. We are not ready to play yet. We need time, and luckily, we have a little bit more of it. The days are going by quick. We will get back to work on Monday and see if we can get better this week."

Here are some takeaways from Saturday's scrimmage.

Offense was a mixed bag

In the postgame scrimmage media scrum, Anderson didn't sound too pleased with his offense.

Due to the messy play, which included a pair of dropped passes from receiver Brandon Bowling, some questionable snaps and a holding call that derailed a drive, the offense struggled to find a rhythm and didn't play their fast pace of offense as much as they would have liked.

They still managed to move the ball, though, specifically in the passing game, where they threw for 311 yards.

Logan Bonner led the way, going 14-of-25 passing for 194 yards, including a 50-yard pass to fellow Arkansas State transfer Bowling. He also connected with wide receiver Derek Wright, who proceeded to hurdle over cornerback Terin Adams, igniting the loudest cheer of the day from the couple hundred fans in attendance.

Andrew Peasley was 7-of-14 for 28 yards and rushed for 34 rushing yards on six carries. He didn't look less poised in the pocket than Bonner but found success scrambling for yardage. Cooper Legas finished 3 of 7 for 76 yards.

When asked who had separated themselves in the quarterback competition, Anderson said, "I don't think either one of them played too well today."

The college football season is close, and with it comes the return of the KSL.com College Football Pick'em for the 2021 season.

Van Leeuwen is a playmaker

Van Leeuwen had himself quite the fall camp thus far, and he certainly proved it on Saturday.

To open the scrimmage, Van Leeuwen caught a 51-yard pass from Legas for a touchdown. A few moments later, he climbed over a defender to snag a 21-yard touchdown pass from Bonner. He capped it off with a touchdown catch from Peasley while the team was working on their goal-line offense.

Finishing the day with four receptions for 81 yards, he sat out for the latter part of the scrimmage to ice his shoulder, something that was "precautionary."

Defensive coordinator Ephraim Banda went over to Van Leeuewen after the scrimmage, patted him on the shoulder, and said, "I can't figure out how to stop this kid!"

Van Leeuwen has gone from being somewhat of an afterthought in the receivers room to somebody expected to play a major role out of the slot this season. It may be astonishing how he performed in fall, but Anderson believes it's nothing new.

"I mean, he did it all spring, so it doesn't surprise me any more,'' Anderson said. "The quarterbacks have a tremendous amount of confidence so he did what I kind of expected him to do at this point."

The Aggie rushing attack had just 141 yards on 53 carries for just 2.7 yards per carry. Much of that had to do with the defensive front holding the run game in check.

Motu'apauaka, Marcus Moore, Nick Heninger and Patrick Joyner, who made up the first-team defense for much of the afternoon, plugged up running holes and made it difficult for the ground game to be established.

Other members of the defense that stood out included safety Dominic Tatum, who broke up two pass plays in the goal-line drills and finished with eight tackles. Safety Hunter Reynolds had six tackles on the day.

"Defensively, we played well early," Anderson said. "We didn't do a great job in a couple of our situations — our goal line was poor and we needed to get the offense off the field in the four-minute drill, but we finished with a good two-minute stop." 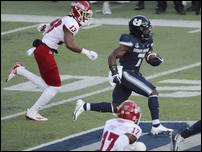 With a new season and coaching staff, veteran running back Devonta'e Henry-Cole and tow think they can make their mark in 2021.

"We have several (guys) that are out right now," Anderson said. "Luckily, probably only one guy is out for the season right now in Broc Lane and everybody else should be getting healthy."

Bannerman, Vakauta and Vaughns all have a chance to be back in the lineup before the first game at Washington State, according to Anderson.

The depth on the offensive and defensive line is a primary concern of the Utah State coaching staff, so injuries in those two positions could have a major impact on the season.

A set of twins joins the program

Recently announced by Utah State, freshman Elia Migao and Enoka Migao are officially Aggies. The twins, who graduated from Chaparral High in Temecula, California, in spring, originally committed to BYU. But after a turn of events ended up in Logan.

"They signed letters of intent for BYU this past summer, but for whatever reason there were some starting with everybody else on time," Anderson said. "Ultimately, they were given the opportunity to step out of those NLI's and we were happy to recruit them and pick them up."

Elia Migao, a 6-foot-2, 350-pound offensive lineman, and Enoka Migao, a 6-foot-5, 230 pound defensive end, provide much-needed depth to their respective positions and have an opportunity to play this season if they can learn the playbook quick enough.

"They've been great additions," Anderson said. "Both freshmen with great futures ahead of them. And it's fun to see them just kind of get acclimated this first week. It was really good to see our guys how they responded to them coming in. ... And who knows, either one of them or both could step in and get involved in two deep this year if they can pick things up mentally in a hurry."

Enoka has already made an impact on the field and recovered a fumble for the Aggies defense in the sole turnover Saturday.