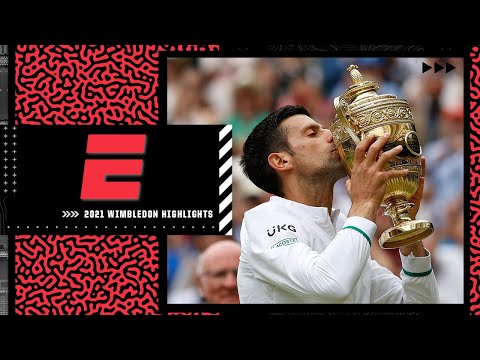 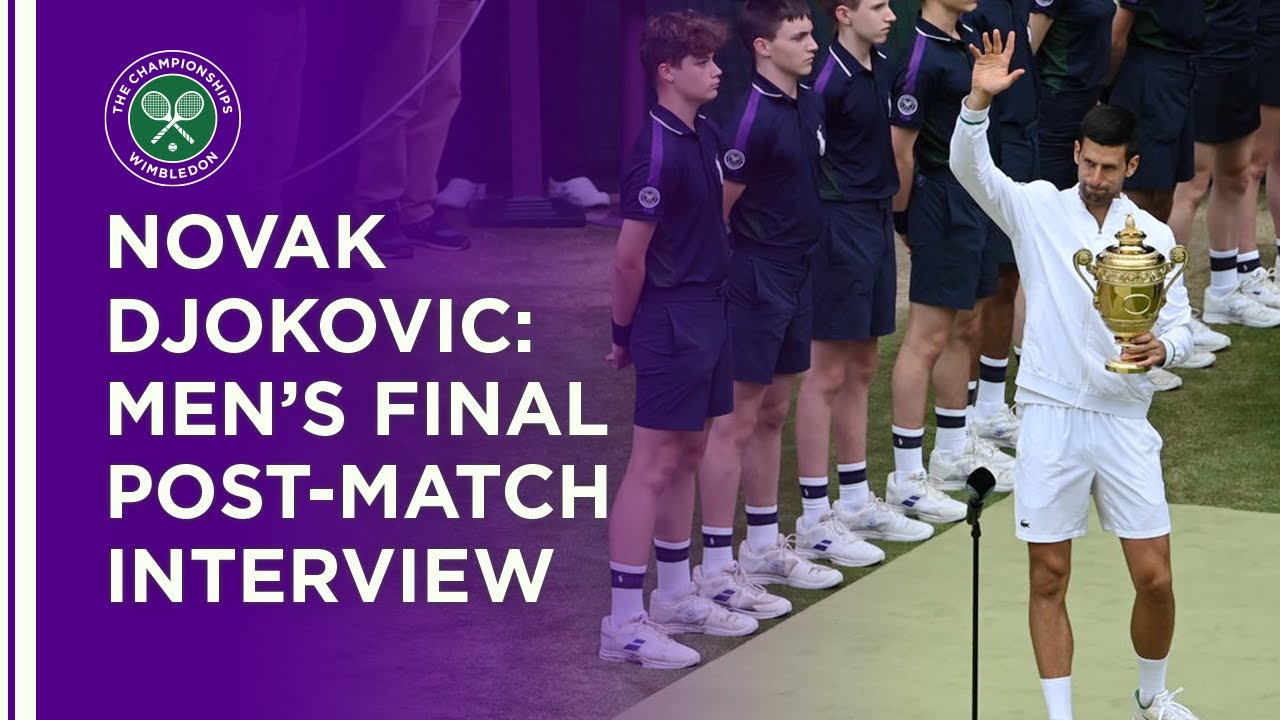 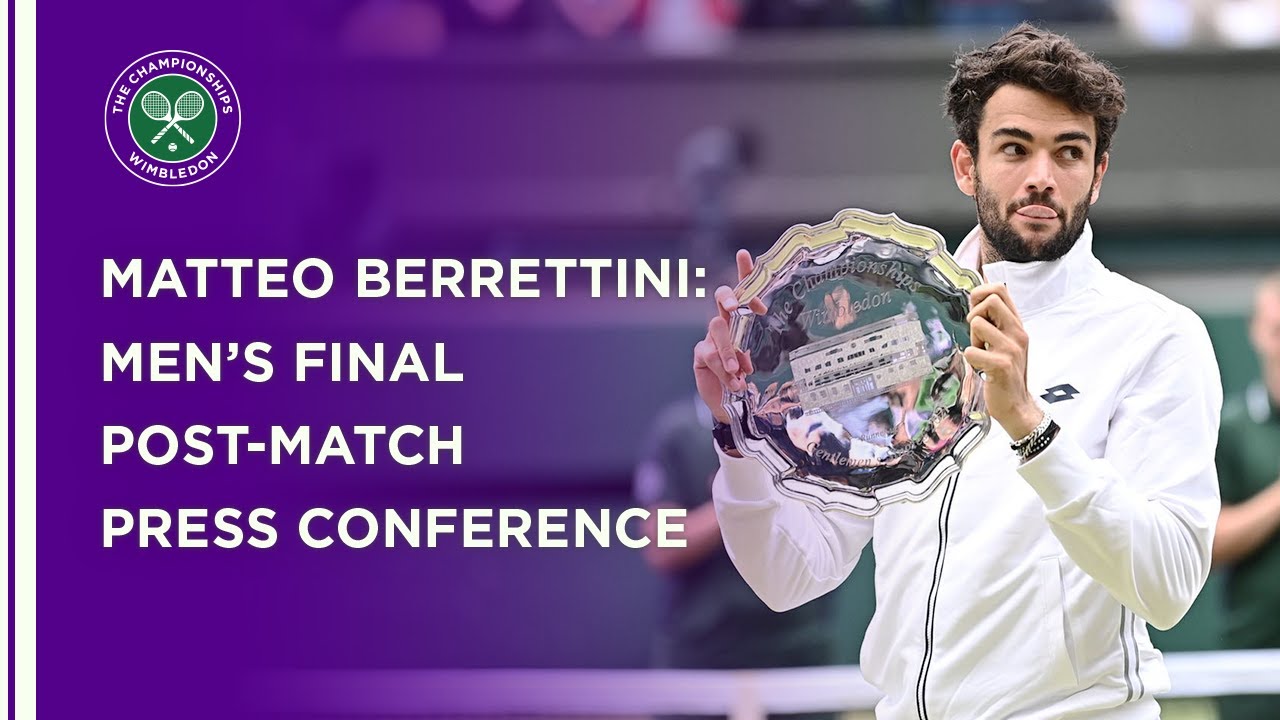 WIMBLEDON, England (AP) — The Wimbledon final was locked up at a set apiece after nearly 2 1/2 hours, and Novak Djokovic's bid for a record-tying 20th Grand Slam title was at a critical juncture, when he faced two break points while thousands in the full-capacity crowd at Centre Court chanted his opponent's first name.

On each of the next two points, Djokovic, known for his baseline supremacy, charged forward. On each, Berrettini's passing attempt found the net. After the second, Djokovic stared into the stands and pointed to his ear, then waved his racket. He got what he wanted; a chorus of his nickname broke out: "No-le! No-le!" Two points later, when he grabbed the game with a 118 mph ace, Djokovic put his racket behind an ear, heard more noise, nodded and smiled.

"I consider myself best, and I believe that I am the best, otherwise I wouldn't be talking confidently about winning Slams and making history," said Djokovic, a 34-year-old from Serbia who is ranked No. 1 and has spent more weeks in that top spot than any other man. "But whether I'm the greatest of all time or not, I leave that debate to other people."

It is a popular topic, certainly. And every member of the so-called Big Three has his supporters. This season might tilt the balance in Djokovic's favor in the minds of those yet to be convinced.

Already the first man since Rod Laver in 1969 to win the first three major tournaments in a year, Djokovic will take aim at a true calendar Grand Slam at the U.S. Open, which starts Aug. 30. Only two men — Don Budge in the 1930s and Laver twice in the 1960s — have gone 4-for-4.

"I'm going to definitely give it a shot," Djokovic told the Centre Court crowd during the trophy presentation. "I'm in a great form and obviously playing well. ... So let's keep it going."

He earned a third consecutive championship at the All England Club and sixth overall. Those go alongside nine at the Australian Open, three at the U.S. Open and two at the French Open.

"I have to pay a great tribute to Rafa and Roger. They are legends. Legends of our sport. They are the two most important players that I ever faced in my career," Djokovic said. "They are, I think, the reason that I am where I am today. They've helped me realize what I need to do in order to improve, to get stronger mentally, physically, tactically."

Federer and Nadal both tweeted their congratulations.

This was Djokovic's 30th major final — among men, only Federer has played more, 31 — and the first for Berrettini, a 25-year-old from Italy who was seeded No. 7.

"Hopefully," Berrettini said, "it's not going be my last one."

It was a big sporting day in London for his country: Italy's soccer team faced England at Wembley Stadium in the European Championship final at night.

With Marija Cicak officiating, the first female chair umpire for a men's final at a tournament that began in 1877, play began as the sun made a rare appearance during the fortnight, the sky visible in between the clouds.

The opening game featured signs of edginess from both, but especially Djokovic, whose pair of double-faults contributed to the half-dozen combined unforced errors. He faced a break point but staved it off.

The 6-foot-5, barrel-chested Berrettini's powerful serves sent line judges contorting to get their head out of harm's way. Djokovic occasionally took cover himself, crouching and raising his racket as if it were a shield to block back serves aimed at his body.

Not many opponents manage to return serves at 137 mph and end up winning the point, but Djokovic did that at least twice. And the big forehands Berrettini drives past most other players kept coming back off Djokovic's racket.

"I didn't play badly because I didn't feel well," Berrettini said. "He made me play badly."

That's what Djokovic does: He forces foes to work so hard to win every point, let alone a game, a set, a match.

Indeed, this one could have been over much sooner: Djokovic led 4-1 in the first set, 4-0 in the second and 3-1 in the third. But in the first, he faltered, wasting a set point at 5-2, getting broken when he served for it at 5-3, then dropping four of the tiebreaker's last five points.

When Berrettini closed it out with a 138 mph ace, he shouted — but said later he couldn't hear his own roar because of the how loud many of the 15,000 spectators were.

But Djokovic is nothing if not a fighter. He blunted Berrettini's best efforts and won the fans over, too. When it was over, Djokovic dropped to his back on the turf, arms and legs splayed, showered by cheers. Moments later, he rose, threw his head back, spread his arms and basked in the joint appreciation of his accomplishment.

As Berrettini put it: "He's writing the history of this sport, so he deserves all the credit."

It was an entertaining final, with some magical points. On one, Berrettini conjured up a 'tweener lob that Djokovic tracked down with his own-back-to-the-court flick that wound up in the net. On another, Djokovic slid into a keep-the-point-going defensive backhand and, after Berrettini replied with a drop shot, sprinted forward for a winner. Djokovic raised his index finger — as if to remind everyone, "I'm No. 1!" — and Berrettini flipped his racket end over end, caught it and smiled.

What more could he do?

Not much anyone can do against Djokovic, it seems.

He has won eight of the past 12 majors — all since turning 30. And for all of the questions about when the younger generation would step forward, Djokovic is singlehandedly holding off the kids.

In this year's three majors, he is 21-0, with victories in finals over Daniil Medvedev, 25, in Australia, Stefanos Tsitsipas, 22, in France, and now Berrettini, 25.

On Sunday, Djokovic made merely 21 unforced errors, while accumulating 31 winners.

Djokovic's returns are as good as anyone's, ever. His two-handed backhand is a constant threat. His ability to anticipate and reach shots is remarkable. And he does whatever it takes: Djokovic won 34 of 48 points when he went to the net, 7 of 9 when he serve-and-volleyed.

What sets him apart above all is a quality stats can't trace: "The ability to cope with pressure," he called it.

When the tension and heart rate ratchet up, Djokovic is either impervious to that sort of thing — or plays as if he is.

It's the experience. The grit and guts. The talent and hard work.

This has been a year of dominance by Djokovic, on top of a decade of success.

"The last 10 years has been an incredible journey," he said, "that is not stopping here."