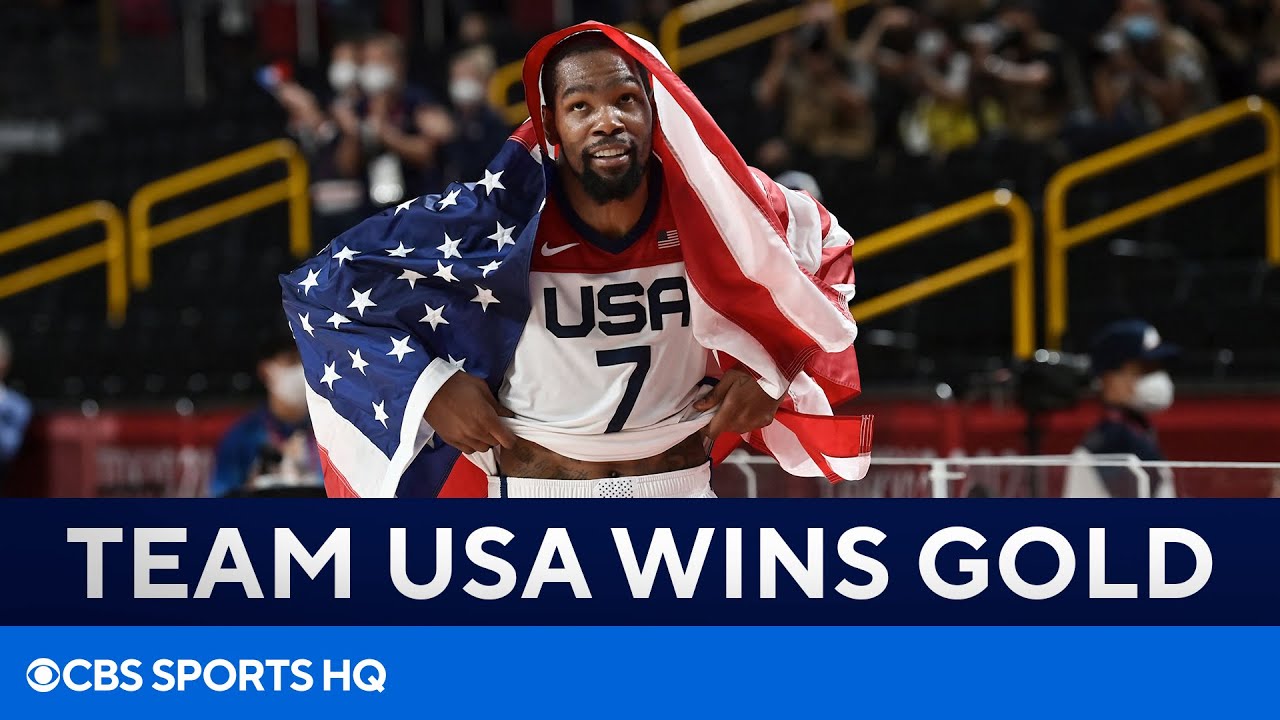 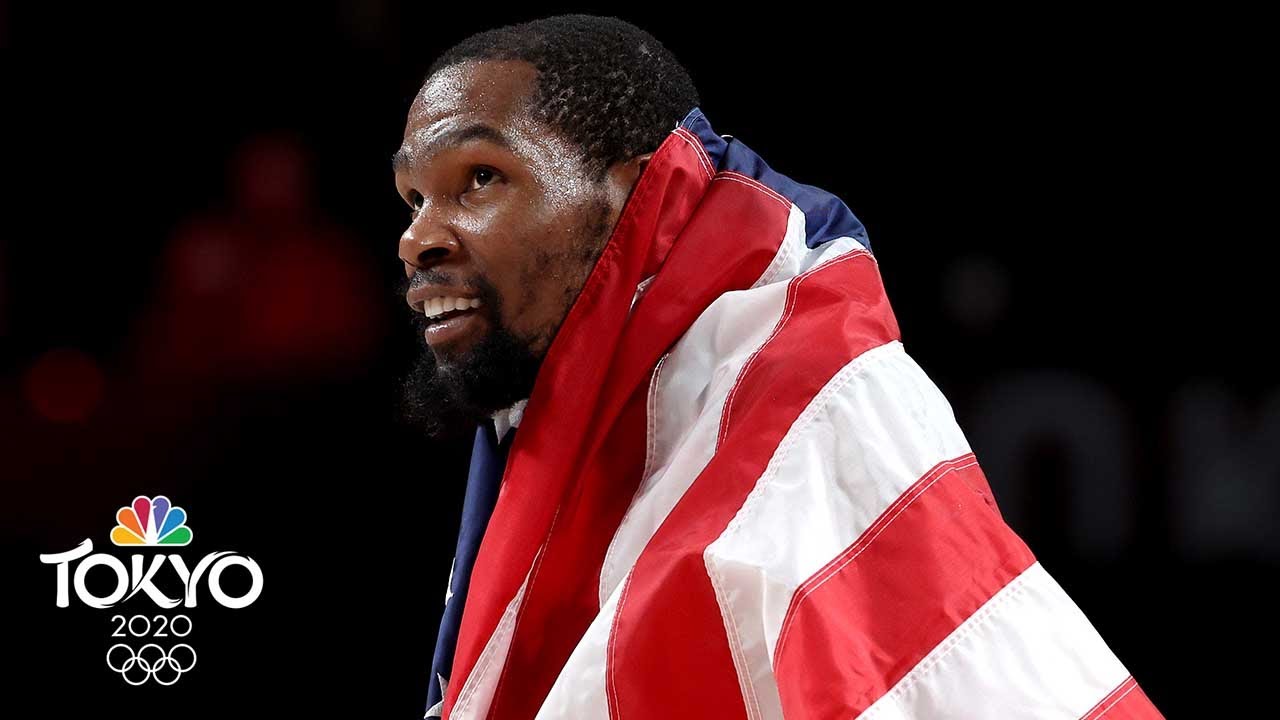 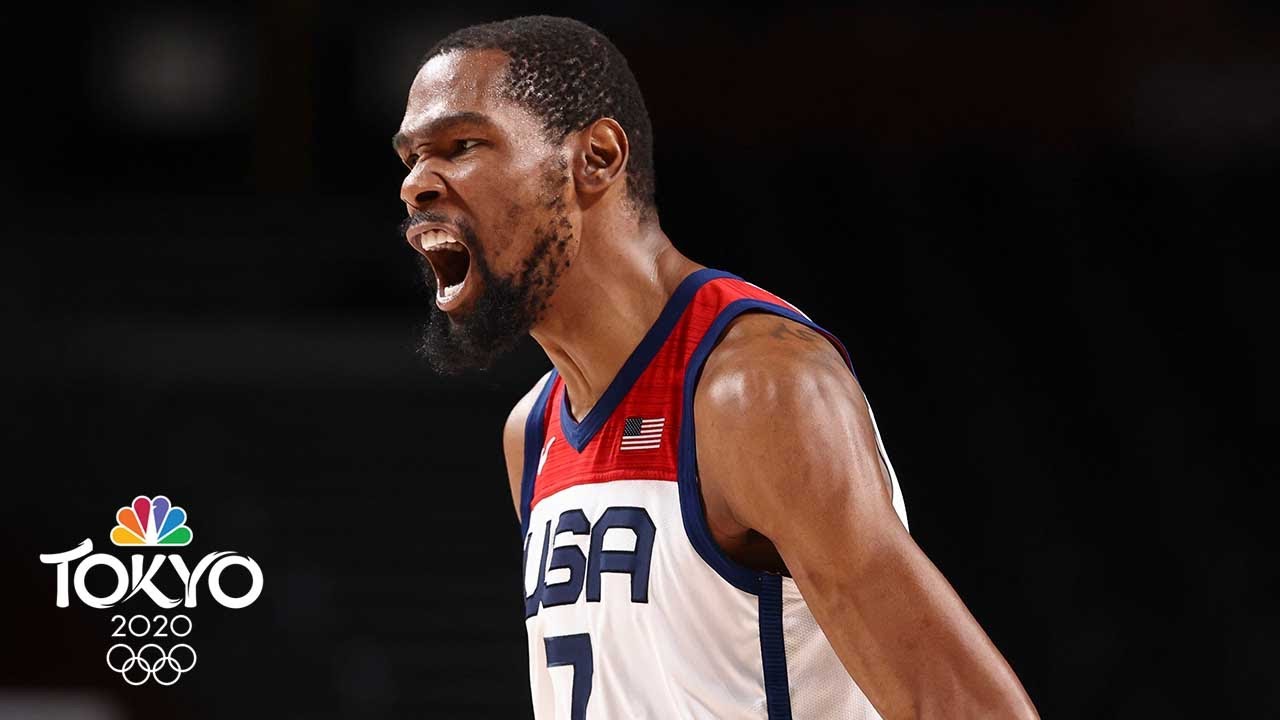 SAITAMA, Japan — Nothing about the summer was easy for the U.S. men's basketball team, and neither was the gold-medal game.

The Americans expected nothing less.

And in the end, their Olympic reign lives on.

Kevin Durant scored 29 points and joined Carmelo Anthony as the only three-time men's gold medalists in Olympic history and the U.S. held off France 87-82 on Saturday to win the title at the Tokyo Games — ending a summer that started with sputters but closed with celebration.

"Every championship is special, and the group you're with is special, but I can be honest and say this is the most responsibility I've ever felt," said U.S. coach Gregg Popovich, who adds this gold to five NBA titles he's won as coach in San Antonio. "You're playing for so many people that are watching, and for a country, and other countries involved. The responsibility was awesome. I felt it every day for several years now. I'm feeling pretty light now and looking forward to getting back to the hotel."

Wine was awaiting. Later Saturday night, after Slovenia and Australia play for bronze, Popovich and the team return to the arena one more time for their gold medals.

"Everybody was questioning us," U.S. forward Draymond Green. "This is special."

Durant sealed the win with two free throws with 8.8 seconds left, making the outcome academic. The lead was five, France's final possession was irrelevant, and it was over. The U.S. players gathered for a hug at midcourt, Durant, Green and Bam Adebayo wrapped themselves in American flags, Popovich had a long hug with his assistants and the journey was complete.

"I'm so happy for Pop, the staff, the players, the country," said a teary-eyed USA Basketball managing director Jerry Colangelo, who was overseeing the men's program for a fourth and final Olympics and won gold in each one. "It's a great way to finish."

Jayson Tatum added 19 points, and former Weber State star Damian Lillard and Jrue Holiday each scored 11 for the U.S. — which knew nothing but gold would make this trip a success.

"I think it's more joy than relief, but definitely some relief," said Lillard, who became the first-ever gold medalist in Wildcats athletic history. "Because of the expectations that get placed on Team USA, obviously it's going to be some relief."

We always knew he was golden. 🥇

Congratulations to @Dame_Lillard and #TeamUSA on their Olympics win! #WeAreWeber#TokyoOlympicspic.twitter.com/IGDABnkX0s

Evan Fournier and Utah Jazz center Rudy Gobert each scored 16 for France, which now has three silver medals — all coming after gold-medal-game losses to the U.S. Guerschon Yabusele scored 13, Nando de Colo had 12 and Timothe Luwawu-Cabarrot scored 11 for France.

The mission was accomplished: Gold, again — the 16th time in 19 Olympic tries for the U.S. The Americans had a players-only meeting after the opening loss to France at these games, vowed to figure things out and never lost again.

"Each and every one of us put in that work every single day, from coaches to the trainers to the players," Durant said. "We all came in with that goal of, 'Let's finish this thing off. Let's build a family. Let's build this team. Let's grow this team every day.' ... Man, it's just incredible to be a part of something so special, and I'm bonding with these guys for life, this family for life."

For some, it adds to family legacies. Holiday now is an Olympic gold medalist, just like his wife Lauren was twice with the U.S. women's national soccer team. JaVale McGee now has Olympic gold, just like his mother Pamela won with the U.S. women in basketball at the 1984 Los Angeles Games. They're the first to do that in U.S. Olympic history; the only other known occurrence in Olympic history was a Russian mother-son combo who won medals in fencing and water polo in 1960 and 1980.

For Milwaukee Bucks teammates Holiday and Khris Middleton, it's admission into a rare club: Before now, only Scottie Pippen (who did it twice), Michael Jordan, LeBron James and Kyrie Irving had won an NBA title and Olympic gold in the same year.

And for Popovich, it completes an Olympic journey that started a half-century ago. He was playing for the United States Air Force Academy, tried unsuccessfully to make the 1972 U.S. Olympic team — "the powers that be actually selected Doug Collins instead of me, it's hard to believe," Popovich joked earlier this summer — then accepted the task of replacing Mike Krzyzewski as the U.S. coach for this Olympic cycle.

"Being part of the Olympics has been a dream," Popovich said.

Popovich insists this is not about his legacy, but his players and assistants might disagree.

"I'm just thrilled for Pop and for Jerry," U.S. assistant coach Steve Kerr said. "Pop has been thinking about this for the last four or five years. Jerry is the one who turned USA Basketball around after the '04 Olympic loss. ... We wanted to send Jerry out with the gold medal."

The U.S. missed its first eight 3-point tries before Durant got one to drop with 2:04 left in the opening quarter, starting what became a 21-8 run by the Americans on the way to a 39-26 lead midway through the second quarter.

Just as he did when the U.S. was down against Spain and Australia earlier in the knockout round, Durant stepped up at the biggest moments. He had 21 points by halftime, keeping the Americans afloat.

France closed the half on a 13-5 spurt and got within 44-39 at the break, then within two early in the third quarter.

And after the U.S. briefly led by 14, Nicolas Batum — who saved his team with a last-second block to close out a win over Slovenia in the semifinals — beat the third-quarter buzzer with a 3-pointer that cut the U.S. lead to 71-63 entering the fourth. But the French never got the lead back.

This U.S. team was one that seemed vulnerable when the summer started with losses in its first two exhibitions, wasn't even complete when the Olympics started because three players were in the NBA Finals, lost Bradley Beal to virus-related issues before the games began, and had lost its last two games against France.

"We're thrilled and honored to be able to represent the country the way we did," Popovich said. "The team progressed very rapidly in a very short period of time under some difficult circumstances, which I think made this win all the sweeter. We're glad it's over."