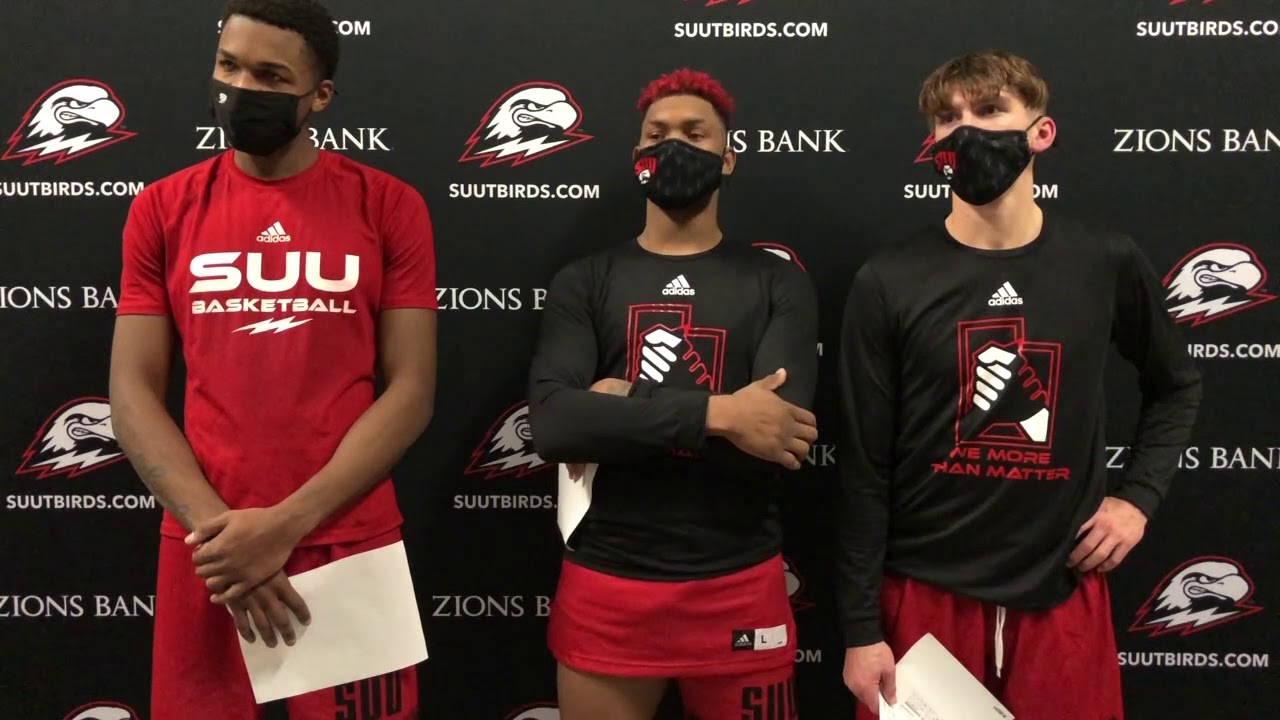 SALT LAKE CITY — The first meeting between Southern Utah and Dixie State as Division I rivals had a little bit of everything.

Double-digit comebacks? This game had two of them.

The last one favored the Thunderbirds, though.

John Knight III had a game-high 22 points and five assists, and Aanen Moody added 15 points on five 3-pointers to help Southern Utah hand Dixie State its first loss of the season, 85-78, in front of a limited-capacity crowd at the America First Event Center in Cedar City.

Tevian Jones added 17 points, four rebounds and three assists for the Thunderbirds (5-1), and Ivan Mandunic supplied 10 points and eight rebounds for a home team that outrebounded the Trailblazers 46-32.

"We knew it was going to be a tough ball game," SUU coach Todd Simon told Pluto TV after his squad improved to 2-0 against in-state competition."They do a great job, are really well coached, and are a talented group. They did a lot of work on the offensive end against us, but luckily we were able to get one-and-dones when we made shots, and then played late with good composure."

Cameron Gooden scored 16 points with three rebounds to lead Dixie State (3-1), and Frank Staine added 13 points and 10 rebounds. Jacob Nicolds supplied 15 points, and Isaiah Pope had 9 points and three rebounds for the Trailblazers in their first game against the Thunderbirds since 1963.

Staine drained a pair of 3-pointers in the first four minutes to help the Trailblazers jump out to a double-digit lead early.

But Staine picked up his second foul midway through the first half, and as the Thunderbirds were mounting a comeback bid. Jones' 3-pointer sparked a 10-2 run that returned the lead to SUU with 6:23 to go in the half.

After trailing 13-4 early, SUU finished the half outscoring Dixie State 41-23, including an 11-2 run in the final four minutes capped by Knight's breakaway dunk to end the half up 45-36.

Knight had 10 points, three rebounds and two assists at the break, and Madunic added 7 points and seven boards at halftime.

Dixie State cut the lead as low as one with an 8-0 spurt around the midway mark of the second half, including Brock Gilbert's 3-pointer from the left elbow to pull within 61-58. The Thunderbirds shot just 14-of-22 from the free-throw line, including 9-of-16 in the second half, as the Trailblazers mounted a charge of their own.

"We need to find some consistency. … Obviously, we didn't make free throws today at the level that we need to. But 17 assists, 18 offensive rebounds, those are things that we really emphasize work for us."

Pope scored 4-straight points to give Dixie State its first lead of the second half, 64-61, with 8:06 to play. Just like that, the host Thunderbirds' lead evaporated.

But Moody wouldn't let the lead stand, dropping back-to-back 3-pointers with 3:43 left to pace a 9-0 run and retake a 77-70 advantage before holding on for the win.

"He's trying to get his rhythm, been out for quite a while. But it's like riding a bike when he's shooting," Simon said of Moody. "He gets back in there, and that's what he does. He's as good a shooter in the entire country."

SUU hosts Bethesda College at 7 p.m. MT Friday before another game with the Flames on Monday prior to jumping back into Big Sky play, where the Thunderbirds are 2-0 with a sweep over Montana.