PROVO — The ceremony for seniors that annually precedes BYU's final home football game should have an exception this year.

As a fifth-year senior, Taysom Hill would still have one year of eligibility left for next season if he chooses to return. If the often-injured quarterback, who has been sidelined since the first game, declines the opportunity to keep playing then this year would be his last as a college football player.

Either way, BYU should proceed as if Hill's time in the program has ended. When Hill's name is announced and he receives his senior blanket, the home crowd should extend a rousing applause as part of a thank you and goodbye.

As harsh as it sounds, BYU football needs to move on from Hill. The reality is, Tanner Mangum is BYU's quarterback of the present and the future.

"The best-case scenario for Taysom is we might award two (senior blankets)," coach Bronco Mendenhall said this week. "When in doubt we'll award extras. If we're not sure what someone is going to do we'll give them one, and if they want to come back they don't have to give it back and we'll give them another."

Not scheduled to talk the future with Hill until after the season, Mendenhall can't say what the future holds for the quarterback. Here's where Mendenhall needs to make the tough decision in the program's best interests, like he did the last two times in recent years in firing several coaches on the offensive staff. 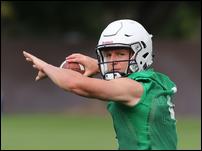 If Taysom Hill decides to play football for BYU in 2016 who should start: Hill or Tanner Mangum? Here are arguments for each quarterback.

A wildly talented player, Hill has not been able to stay healthy in three of the last four seasons. After suffering a season-ending injury in the fifth game last season Hill went down in the opener this year. He also lost his freshman year to an injury in midseason.

To count on anything from Hill next season would be foolish and also irresponsible to the rest of the team. The time to part ways is now, allowing Hill enough time to seek opportunities elsewhere if he wants.

"He's going to want to play quarterback, and I'm not certain that's the right thing for BYU, quite frankly, at this moment," said former BYU offensive coordinator Brandon Doman, who was fired two years ago.

"I would recommend for BYU to get Tanner ready to go the next three years and prepare to have a real stable environment at quarterback. He's not going to be suspect to injury like Taysom is because he's not running around."

While playing time always should be earned, Mangum doesn't need to be looking over his shoulder next season. It's best for the team for him to go into the offseason as the designated starting quarterback, with others vying for the back-up position.

Distant and recent history also has proven BYU's offense works best with a pass-first quarterback as opposed to a dual-threat. Even with Hill putting up eye-popping statistics at times, BYU was only 8-5 during the season he remained healthy.

Riley Nelson, who as a dual-threat in the mode of Hill, also battled injury issues during his time as a starter. BYU averaged almost 11 wins a season during the four years that pass-first quarterbacks John Beck and Max Hall started.

This isn't to suggest Hill should quit even if he wants to keep playing. As a graduate student, he could transfer and be immediately eligible to play next season.

One possibility could be playing for Jim Harbaugh at Michigan, which starts a senior quarterback who transferred in for this season. Hill signed to play for Harbaugh at Stanford but never went there and transferred upon returning from a church mission after the coach left to take over for the San Francisco 49ers.