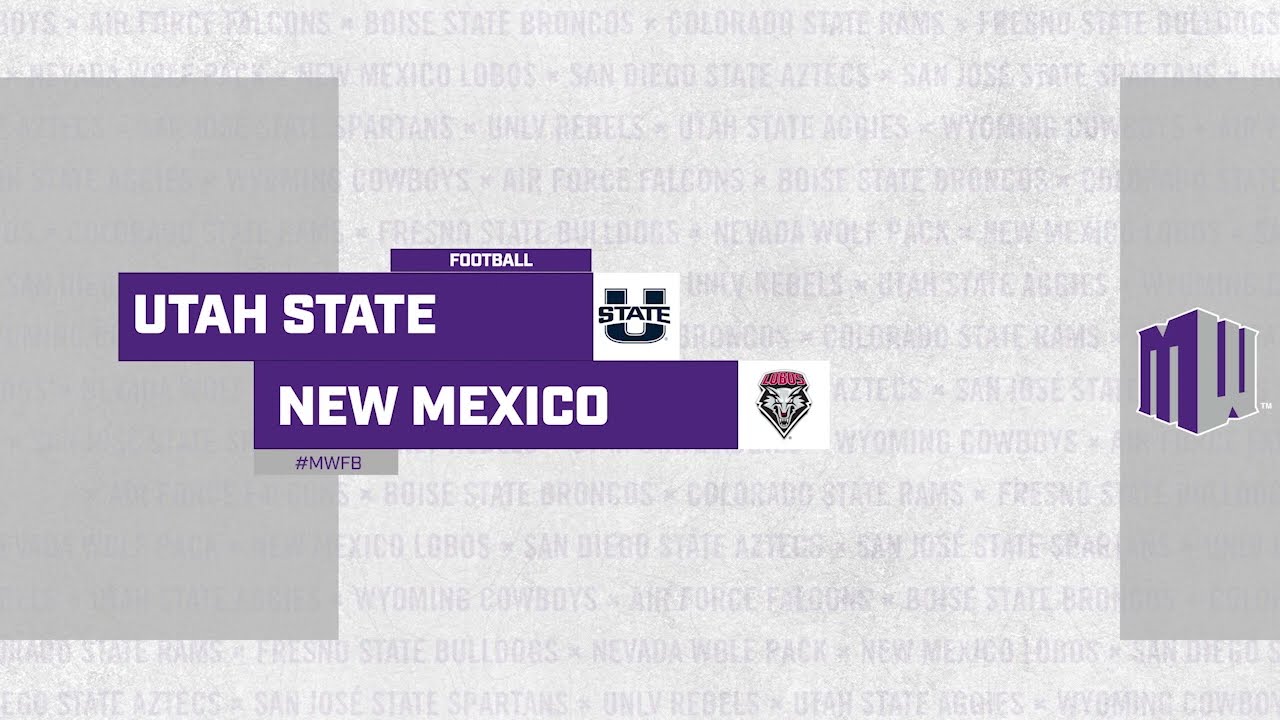 LOGAN — Two things had to happen on Friday afternoon in order for Utah State to advance to the Mountain West Conference Championship game.

First, the Aggies had to take care of business on the road against New Mexico; Second, San Diego State had to defeat Boise State.

Utah State's Logan Bonner was 16-of-23 passing for 312 yards and a career-best five touchdown passes in just three quarters of plays, and the Aggies rolled into the Chihuahuan Desert and handled the Lobos 35-10.

Meanwhile in Southern California, San Diego State backup quarterback Jordon Brookshire checked into the game in the second quarter with the Aztecs down 16-3, and went 11-of-15 passing for 192 yards and two touchdowns to lead Brady Hoke's squad to a 27-16 win over the Broncos.

The Aggies now get a shot at the ultimate goal — a Mountain West Conference Championship — when they travel to Carson, California, next Saturday to take on 11-1 San Diego State in the title game.

Aggies head coach Blake Anderson, who said before the season that his team would "win games people don't expect us to win," was showered with two separate Gatorade baths at the end of the game in celebration.

"Me personally, I think the Gatorade bath is a little premature, but I appreciate it," Anderson said. "Yes, we got to the (championship) game. I don't want to be satisfied with getting to the game, I want to want to go win the game.

"But it's hard to even put into words how satisfying this season has been with this group of guys considering all they'd been through last year, the transition and then really just the expectation, or lack thereof of expectations of this particular group," he added. "And I kind of felt like on a weekly basis, it's just everybody kind of felt like the wheels are gonna fall off at some point and in reality would set in. ... This group just had different ideas than that."

More work to do!

Facing a shorthanded New Mexico team — their starting quarterback Bryson Carroll began the season as the team's graduate manager — the game was never in doubt for Utah State.

After posting just one "explosive play" last week against Wyoming, the Utah State offense had nine plays for 15 or more yards — four of them were first-half touchdowns. Bonner hit Derek Wright for 27 yards, Jordan Nathan for 39 yards, Brandon Bowling for 36 yards, and Wright again for 76 yards to give Utah State a 28-0 halftime lead.

Wright, who had no trouble shaking loose Lobos defensive backs all game long, finished with four receptions for 150 yards and two touchdowns. But that wasn't the most memorable performance of the day from an Aggies receiver.

With 14:06 left in the third quarter, Bonner completed a 6-yard pass to the nation's leader in receiving yards, Deven Thompkins, who broke the Utah State all-time single season receiving yard record of 1,543 previously set by Kevin Curtis. Finishing the day with five catches for 35 yards, Thompkins has posted 1,543 receiving yards on the season.

For the game, the Aggies finished with 440 total yards of offense, while the Lobos mustered just 186.

Utah State, who has started slow much of the season — particularly on the road — wasted little time imposing their will early. On the first play of scrimmage, defensive end Nick Heninger bottled up Bobby Wooden for a 9-yard loss and the defense forced a three-and-out series.

After a three-and-out series of their own and another defensive stop, Bonner got the offense going and found Wright down the sideline for a 32-yard gain. He hit him again moments later to go up 7-0 en route to five straight touchdowns by the Aggies before New Mexico managed a field goal.

Utah State's defense, which limited New Mexico to 101 rushing yards and 85 passing yards while forcing 12 tackles for loss, had a much better performance that the let down last week against Wyoming, where the Aggies gave up over 600 yards of offense.

"We definitely said we've got a bad taste in our mouth from last week. But, you know, we still have a chance of accomplishing our goals," Heninger said. "So there's no need to focus on the past.

"We had a great week of practice and the game plan was right. We were able to come out, we started hot, which is very important. And our defense was able to set the tone early, which I think definitely kept the momentum on our side and helped propel our offense to score points."

The long ball, which Bonner has been so effective in throwing all season, is what got the job done for the Aggies. His five touchdowns tied Jordan Love for the all-time Utah State single-game record. He also threw for his 32nd touchdown of the season — tying the all-time record with current Aggies running back coach Chuckie Keeton.

"I think it's just the way our offense is built," Bonner said. "We can hold up in certain situations. We got great wideouts, we got great looks and I think that we knew opportunities were going to present itself."

The gunslinger from Texas took a shot to the ribs late in the third quarter and was taken out for the rest of the game. After the game, Bonner insisted: "I'm OK."

While the Aggies were coasting in the third quarter, Brookshire and San Diego State capped off a 24-0 lead to defeat the Broncos, putting destiny back in Utah State's control. Between the third and fourth quarter, Anderson went over to his team and told them San Diego State had beaten Boise State.

"I brought the guys up and told them, 'Hey, San Diego State did their job, so we've got to finish and be smart."

It was special news for the Aggies players.

"I remember at the time like his coach efforts to try to make me cry in the middle of the game?" Heninger said.

After a fourth quarter, where mostly the second unit played, the party was on.

"They're still listening to loud music, screaming, shouting, having fun and I'm just excited to celebrate this win today with my teammates," Heninger said. "And then after today, put it behind us. Let's focus on what's next."