Déjà vu for Cougars in round one of MWC tournament

FORT WORTH, TEXAS -- Following the No. 14 BYU men's basketball team's ongoing theme during the last two weeks, another unlikely player stepped up to help lead the Cougars (28-4, 13-3 MWC) to victory.

Abouo was one of three Cougars to score more than 20 points as the Cougars made a statement against the Frogs, winning 107-77. The 6-foot-5 inch sophomore was one of the catalysts for his team, which trailed 18-4 3:37 into the game.

"They made their first seven shots," Abouo told KSL Newsradio after the game. "They got some very easy shots, so we just focused on coming out and giving a better effort defensively to get ourselves going."

"It just tells you how important being ready and coming out and playing every minute of every game is," Rose told KSL Newsradio.

Get going they did, as Abouo and his teammates went on a 27-11 run to tie the game at 31 points. The Cougars headed into the break with a 57-43 lead, and never looked back, leading by as much as 32 points in the second half. Abouo was quite efficient, scoring his points on 8-of-10 shooting, including 2 for 2 from 3-point range in only 26 minutes of play.

For the second consecutive game, the bench players seemed to outplay the starters, and proved to be the difference in the game.

"We've have a very deep team and we've got plenty of guys who can play, and that's one thing that makes us very good." 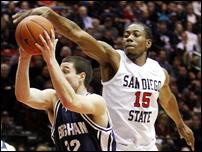 BYU finished second in the standings and earned the No. 2 seed, while UNLV won the tiebreaker with San Diego State to capture the No. 3 seed.

For the second consecutive season, the Cougars' first round game in the MWC tournament will be a rematch of its final regular season game. The Cougars will once again prepare to face the Horned Frogs Thursday at the Thomas and Mack Center.

Although his team will face the same team next week, Rose said he expects to see a different TCU team at the MWC tournament.

BYU, the second seed in the MWC tournament, will square off against the Horned Frogs, the seventh seed, Thursday at 7 p.m.