The BYU men's basketball team tied its best start in school history, and extended its win streak to 15 games, the second longest streak in school history. Fredette showed once again why he was selected as the preseason favorite for MWC Player of the Year, complementing his scoring total with three rebounds, five assists, a block, a steal and just three turnovers in 38 minutes.

He reached his scoring number quite efficiently, going 11 for 19 from the field, including 5 of 8 from three-point range and connected on all six of his free throw attempts. 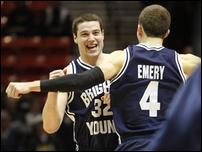 Fredette scores 33 to lead No. 14 BYU over SDSU

Jimmer Fredette scored 33 points and helped key a 15-0 run midway through the second half that carried No. 14 BYU to a 71-69 win over San Diego State on Saturday night, the Cougars' 15th straight victory.

Despite another stellar showing, the Wooden Award candidate said he still isn't completely recovered from his nagging bout with mononucleosis, mentioning that his energy level is still low.

The San Diego State players said they weren't so sure that was the case.

"We heard he was sick," SDSU guard D.J. Gay said after the game. "He didn't look too sick. He had a hot hand; hats off to him."

Fredette's 33 point-performance was his best scoring output since his 49-point performance at Arizona that caused national media outlets to take notice. During that span, Fredette missed two games, and was limited in the other four, scoring only 11.8 points per game in just over 24 minutes per game.

With this win, BYU maintains sole possession of first place in the Mountain West Conference with a two-game advantage in the loss column and is the only title contender without a home loss in the conference, an advantage that should help the Cougars seal the conference title if they can protect their home court.

The road doesn't get any easier for the Cougars as they stay on the road to face New Mexico at The Pit in Albuquerque, N.M. The Lobos have won four straight, including an 18-point win against Colorado St. on Saturday, and will most likely be back in the Top 25 when the polls come out next week.

The Lobos are tied for second in MWC with UNLV with a 4-2 conference record and are 18-3 overall.