Fredette scores 33 to lead No. 14 BYU over SDSU

SAN DIEGO (AP) -- The Mountain West Conference better watch out. Jimmer Fredette is getting over his strep throat and mononucleosis.

Fredette scored 33 points and helped key a 15-0 run midway through the second half that carried No. 14 BYU to a 71-69 win over San Diego State on Saturday night, the Cougars' 15th straight victory.

Fredette missed two games recently and played sparingly in others due to his illness.

"I felt good tonight," he said. "I feel like I'm getting back into good shape again. I'm not quite 100 percent, but I'm close. My energy level is still low. Some of my movements aren't as quick as usual." 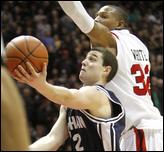 If there were any questions left about Jimmer Fredette's health, they were all answered as the junior guard scored 33 points to lead the No. 13 BYU Cougars to a 71-69 road victory over the San Diego State Aztecs Saturday night.

BYU (20-1, 5-0 Mountain West Conference) has the second-longest winning streak in the nation, behind Kentucky's 19 straight, and reached 20 wins for the fifth straight season.

The Cougars trailed 50-47 before going on their decisive run. Fredette, the Mountain West's leading scorer with a 19.4 average coming in, had five points, including a 3-pointer. Tyler Haws and Jonathan Tavernari also hit 3-pointers as the Cougars took a 60-50 lead with 6:11 to play.

SDSU pulled to 67-66 on Kawhi Leonard's jumper with 52.7 seconds left before Fredette made a layup with 19.9 seconds to go. BYU's Charles Abouo blocked Kelvin Davis' baseline shot with 4.6 seconds remaining. Davis fouled Fredette and he made two free throws to seal it.

"I felt like I wanted to be aggressive," Fredette said about making BYU's last basket. "I really wanted to take that last shot. I really like the ball in my hands. Even if they double-team me, I could be a facilitator."

Fredette "truly is one of the best," SDSU coach Steve Fisher said. "He knows how to create opportunities for himself -- he wiggles, he twists, he finds gaps, he can step back and make shots and he can shoot it on you when you are guarding him. He's very, very good.

"Sometimes you can fill a stat sheet and not be a guy that makes the plays to win, and Fredette did both," Fisher said.

The Cougars ran off to a 22-10 lead midway through the first half, getting eight points each from Jimmer and Haws.

SDSU got its first lead on Gay's 3-pointer a minute into the second half.

SDSU made only 7 of 22 attempts from 3-point range.