A view taken from a rescue helicopter of the Punta Rocca glacier near Canazei, in the Italian Alps in northern Italy, Tuesday, two day after a huge chunk of the glacier broke loose, sending an avalanche of ice, snow, and rocks onto hikers. (Luca Bruno, Associated Press) 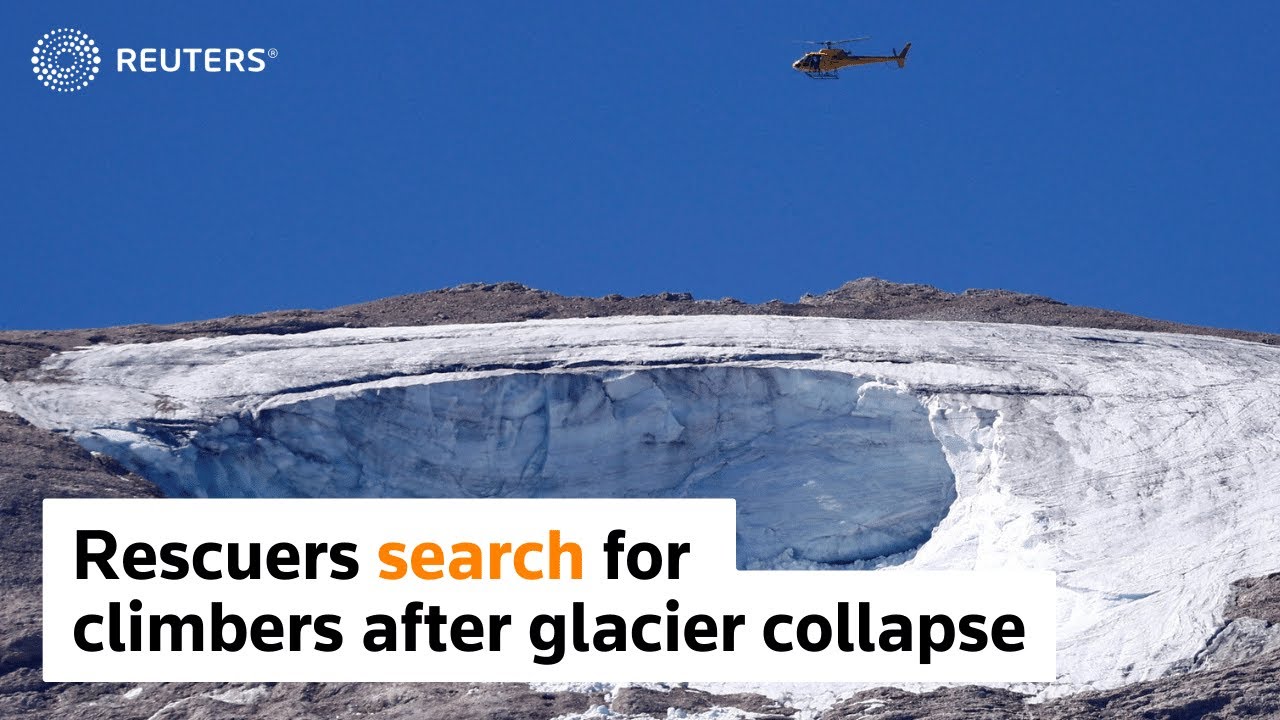 CANAZEI, Italy — Rescuers found body parts and equipment as they searched Tuesday for hikers missing following a powerful avalanche that killed at least seven people and is being blamed in large part on rising temperatures that are melting glaciers.

Officials initially feared 13 hikers were still missing after a huge chunk of the Marmolada glacier cleaved off Sunday in northern Italy. But the province of Trento on Tuesday reduced the number of people unaccounted-for to five, all of them Italian, after eight others checked in with authorities.

One of them is Erica Campagnaro, and on Tuesday her sister Debora Campagnaro, lashed out at the lack of warning about the accumulation of water at the base of the glacier that experts say was evidence of an unusual melt from a heat wave that has been scorching Italy for weeks.

Campagnaro said her sister and brother-in-law, an experienced alpine guide who is also among the missing, never would have left their two sons at home to go hiking if there had been an alert system as there is in ski season warning about the possibility of snow avalanches.

"Is there an authority that had to prevent people (from going up the mountain) given the weather of that day and the weather of the previous days? Where is this authority?" she asked at the site of the rescue camp.

Rain had hampered the search Monday, but sunny weather on Tuesday allowed helicopters to bring more rescue teams and their drones up to the site on the glacier, east of Bolzano in the Dolomite mountains, even as hopes dimmed of finding anyone alive.

"We have to be clear, finding someone alive with this type of event is a very remote possibility, very remote, because the mechanical action of this type of avalanche has a very big impact on people," said Alex Barattin of the Alpine Rescue Service.

After the 200-meter wide chunk of glacier detached, a torrent of ice, rock and debris plowed down the mountainside onto unsuspecting hikers below. At least seven people were killed, two of them Czech, officials said.

There is no chance of getting to safety or perceiving the problem in advance, because by the time you perceive it, you've already been hit.

Nicola Casagli, a geologist and avalanche expert at Florence University, said the impact of the glacier collapse on the hikers was greater than a mere snow avalanche and would have taken them completely by surprise.

"These types of events, which are ice and debris avalanches, are impulsive, rapid, unpredictable phenomena, reaching very high speeds and involving large masses," he said. "And there is no chance of getting to safety or perceiving the problem in advance, because by the time you perceive it, you've already been hit."

Associated Press photos, taken during a helicopter survey of the site, showed a gaping hole in the glacier as if the blue-gray ice had been carved out by a giant ice cream scooper.

The terrain was still so unstable that rescue crews stayed off to the side and were using drones to try to find any remains or signs of life while helicopters searched overhead, some using equipment to detect cellular pings.

Maurizio Dellantonio, national president of the Alpine Rescue Service, said teams had found body parts, hiking equipment and clothing on the surface of the debris, evidence of the avalanche's powerful impact on the hikers.

"We have recovered so many fragments over the last two days. They are very painful for those who pick them up. and then for those who have to analyze them," he said. "Personally I can only think that what we found on the surface will be the same that we will find underneath, when the ice will melt or by digging, if there is a chance."

By late Tuesday, he said technical teams had determined it was safe enough for ground rescue workers to start searching the lowest part of the debris, about 700 meters below the detachment site, where drones weren't working well anyway.

Officials closed all access routes and chair lifts to the glacier for hikers, fearing continued instability and the potential that more chunks of ice might detach.

Premier Mario Draghi, who visited the rescue base in Canazei on Monday, acknowledged avalanches are unpredictable but that the tragedy "certainly depends on the deterioration of the climate situation."

Italy is in the midst of an early summer heatwave, coupled with the worst drought in northern Italy in 70 years that prompted the government to declare a state of emergency in five northern regions. Experts say there was unusually little snowfall during the winter, exposing the glaciers of the Italian Alps more to the summer heat and melt.

"We are thus in the worst conditions for a detachment of this kind, when there's so much heat and so much water running at the base," said Renato Colucci from the Institute of Polar Sciences of the state-run Council for National Research, or CNR.

The CNR has estimated that the Marmolada glacier could disappear entirely in the next 25-30 years if current climatic trends continue, given that it lost 30% of its volume and 22% of its area from 2004-2015.

Maurizio Fugatti, president of the autonomous province of Trento, insisted though that Sunday's detachment was an "exceptional event, one of a kind," when asked about why hikers such as Campagnaro and her husband had been allowed on the glacier.

"There were many alpine guides on that side (of the glacier), people who know very well what the situation is," he said. "On the other hand, we can understand the feeling of the relatives and friends of those people affected."

Casagli said what happened on the Marmolada was unusual, but said such destructive avalanches will become more frequent as global temperatures continue to rise.

"The fact that it happened in a scorching summer with abnormal temperatures must be a wake-up call to understand that these phenomena, while rare, are possible," he told reporters. "If we don't take decisive measures to counter the effects of climate change, they will become more and more frequent."