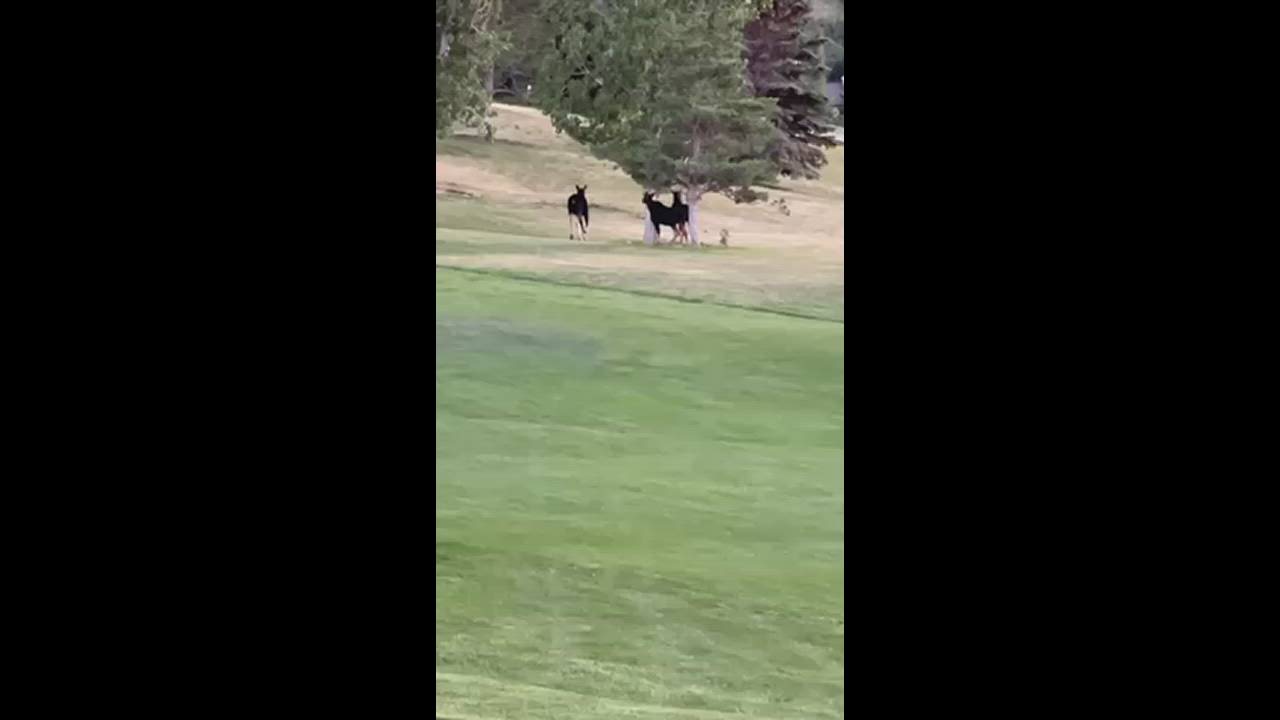 NORTH SALT LAKE — Fore! Strike that. Three moose made their way onto the Eaglewood Golf Course on Wednesday afternoon, throwing several golfers for a loop.

The trio, which wildlife officials say included two adult bulls and one adult cow, arrived from the foothills east of hole No. 3 around noon.

According to general manager Tyler Abegglen, golfers were encouraged "not to approach the moose and to keep their distance." And while the moose were technically on the loose, he said they didn't cause much of a ruckus.

"The moose stayed in the shade behind No. 4 for several hours," he said. "Toward the evening they meandered through the course, swimming in the pond and heading closer to the pro shop area."

Shawn Johnson, who lives near the course, said it was "quite the scene."

"People were pulled over taking pictures. Golfers on the course were watching. It was cool and a little unnerving," Johnson said.

While seeing the three massive animals caused many to stop and stare, and perhaps use quite a bit of caution, several residents including MaryAnn Harrison said there is also an overall concern for the wild animals. As of Friday afternoon, they were spotted still wandering around the area, even taking a dip in residents' pools.

"The moose are still here playing while the car show is getting set up on the golf course," Harrison said. "I really worry about these little babies. I hope no one spooks them or the loud cars don't spook them. I just hope everyone's safe tonight. Tomorrow, there will be fireworks here on the golf course, so I really wish DWR would come and relocate them."

KSL-TV spoke with officials from the Utah Division of Wildlife resources Friday and was told that due to the heat, it was not safe to relocate the animals.

"The moose are not bothering anyone, so we're going to leave them where they are," said Mark Hadley, the agency's northern region outreach manager. "It should go without saying, but we encourage people to keep a good distance from the moose and enjoy viewing them.

North Salt Lake and Eaglewood Golf Course expect around 10,000 people to attend Liberty Fest this weekend. With a firework show planned for Saturday, Abegglen said he hopes the moose will decide to move farther into the foothills before then.