'A big fan of our country': Utah sanitation worker seen on video removing US flag from garbage 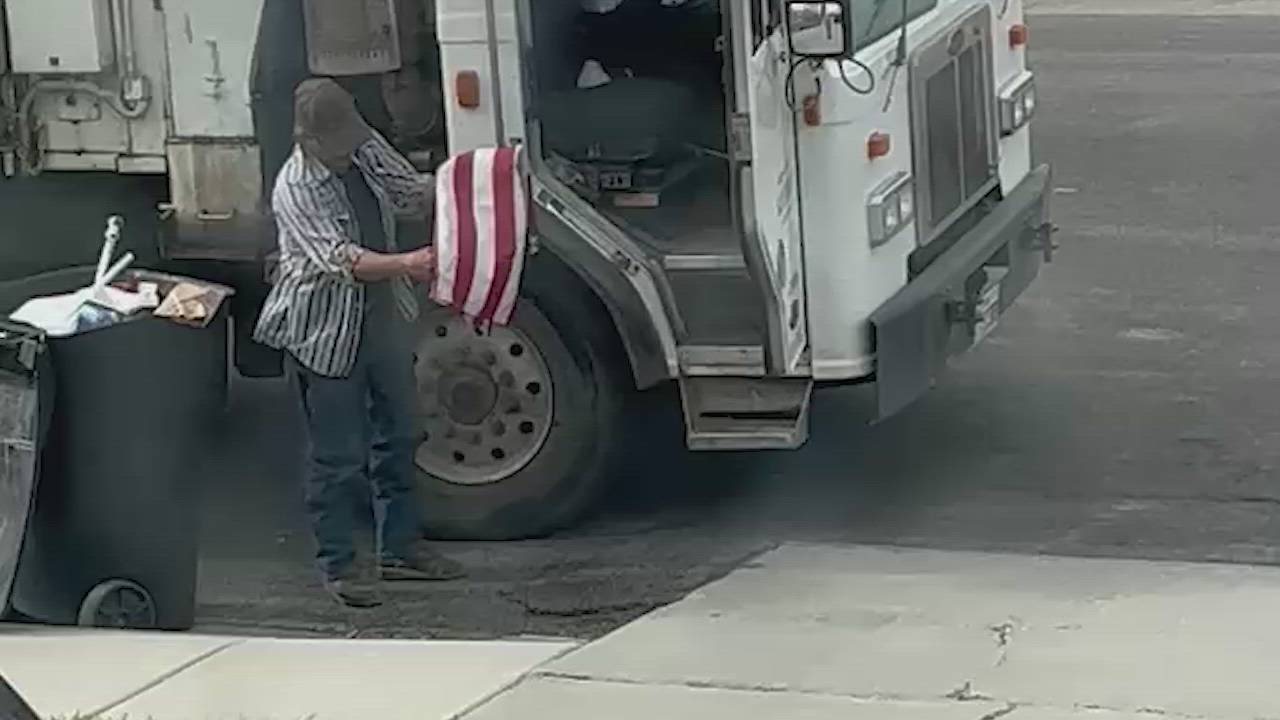 HUNTINGTON, Emery County — In the middle of a windstorm that swept the state on April 19, Brooke Cowley spent much of the day cleaning up her yard that was in disarray and throwing away items that were destroyed. One of those items was a large American flag, still tied to its pole.

Hours later, Cowley found herself in the front room with her children looking out the bay window to see the local sanitation worker removing the flag from the garbage and carefully folding it before putting it in his truck.

Embarrassed by her actions as the wife of a United States Army veteran, Cowley decided to take a video of the worker who she would later find out was a man named Don Gardner. Cowley shared the video on her Facebook page to educate the public on how to properly dispose of a flag. The video went viral, sparking interviews on the national stage.

Gardner on the other hand, who also appeared in the interviews, said he was just doing what he believed was the right thing to do.

"I've always been a big fan of our country," Gardner said. "I served in the Marine Corps, and my family has a long history of military service. I also grew up watching folks here in Emery County serve — many in Vietnam."

Over the years, Gardner has been volunteering with the American Legion Post 39, helping to retire flags. He said that when he saw the flag in the garbage, he wanted to make sure that it was retired correctly.

"I was just doing my job," he said. "I pulled up to the can that was open and I pulled the flag off the pole and folded it up. It's just something I do. I've probably found 11 or 12 flags over the years in the garbage, and I've always taken them out and made sure they're taken care of proper."

Gardner's daughter Sara Hayward said that she wasn't surprised by what her dad did because this is just the type of man he is.

"He is truly dedicated to everything in life," Hayward said. "He had a huge part in creating a memorial ride that takes place every summer in remembrance of his friends who have passed away. He helps greatly with the local co-ed volleyball league and softball leagues. He spent so much time with me in the hospital when I was in my car accident that caused strokes, and he helped push me through to recovery. I know that don't have much to do with saving flags, but he is just an all-around great guy."

More than just a flag

Gardner said the attention to the video has been something he never imagined or wanted, but that if it teaches people to be more aware of what the flag stands for and to show respect for it, then it's a good thing.

"We have rights and freedoms in this country because of the servicemen and women who have fought," Gardner said. "I'd do it all again if it saved another flag. It's worth it."

Cowley said that while she was embarrassed for having thrown the flag away, she is grateful for the teaching opportunity.

"I was really embarrassed," Cowley said. "My husband is a veteran and has even taught youth groups how to properly dispose of a flag. When I told him what I did, he couldn't believe it. It was a really stupid moment in my life, and I wanted others to learn from my mistake."

"If you have an old flag that you don't know what to do with, bring it to me; I'll take care of it," Gardner said. "You can also get them to your local American Legion, city office, fire department or sheriff's office. They will make sure to get the flags to the proper ceremony for retirement."