From left, Utah County commissioners Amelia Powers Gardner, Bill Lee and Tom Sakievich discuss a resolution declaring support for repealing and replacing the death penalty during their meeting on Wednesday. The measure passed on a 2-1 vote, with Sakievich voting against. (Utah County Government, YouTube)

SALT LAKE CITY — As an effort to repeal and replace Utah's death penalty continues to gain momentum, a new poll shows most Utahns support keeping the death penalty on Utah's books — but now by a vastly smaller margin than past surveys have indicated.

A very slight majority of Utahns — 51% — oppose eliminating Utah's death penalty as a sentencing option in future cases compared to 40% who support doing away with it, according to a new Deseret News/Hinckley Institute of Politics poll. About 8% said they didn't know what to think.

The survey released Wednesday is the latest poll to gauge Utahns' temperature on the death penalty as an effort to repeal and replace it is gaining steam, but is expected to draw heated debate on Utah's Capitol Hill during the Utah Legislature's 2022 general session slated for January.

Dan Jones & Associates conducted the poll of 746 registered Utah voters from Oct. 14-21. It has a margin of error of plus or minus 3.54 percentage points.

The poll shows Utahns nowadays have developed increasingly mixed views about capital punishment than they have in the past.

Consider the results of a Deseret News-KSL survey conducted by the same pollster, Dan Jones & Associates, back in 2010, which found 79% of Utahns either strongly or somewhat favored the death penalty, compared to only 16% that opposed executions.

That 2010 poll showed Utahn's support of the death penalty had not waned at all from a previous survey in 2003, which asked Utahns the same question. The results were strikingly similar even though seven years separated the two. In the 2003 poll, 78% percent favored the death penalty and 17% opposed it.

The nearly 50% to 40% split comes after a 2018 study by the state's Commission on Criminal and Juvenile Justice suggested support for capital punishment may be waning in the state of Utah.

The new poll figures also came the same day the Utah County Commission — the legislative body of one of Utah's most conservative counties — voted 2-1 to support a resolution calling on Utah lawmakers to support a bill to repeal and replace the death penalty with a new sentencing option of 45 years to life in prison.

What does this mean for efforts to repeal and replace Utah's death penalty?

Told of the poll results Wednesday, Connor Boyack, president of the Libertas Institute, a Utah-based libertarian think tank that's helping drive the 2022 bill to repeal and replace Utah's death penalty, said it's "significant" that the latest poll shows Utahns over the years have become increasingly opposed to capital punishment.

"The decreasing public support for the death penalty shows what we've seen with elected officials in recent years, and that is this: The more people learn about the death penalty, the less they support it," Boyack said.

For years, Boyack said his organization and others have been trying to "educate the public about the problems with capital punishment, and there are many."

"As that education has happened, public support has waned, and predictably so," Boyack said. "Because the death penalty is a law that creates many other problems. The public doesn't want to tolerate the risks to innocent people, the increased cost to taxpayers, the re-traumatization of victims' family members through constant appeals. So as people learn about this they increasingly drop their support. The same thing is happening with legislators."

Boyack and other supporters have told the Deseret News they're confident enough legislators will support next year's bill to get it approved, even though past attempts have failed.

Boyack said if he was able to "speak directly to every Utah voter" for 15 minutes to outline the issues with the death penalty, "I'm convinced the poll numbers would be in our favor."

"We've been out there talking to the public, and it's incredible the number of people who would say, 'Oh my gosh, I didn't think about that before,'" Boyack said. "In the past decade, there's clearly been a huge shift. Do we need to wait another decade to continue educating the public? I don't think so. I think the trend is indicative of the fact that truth is on our side."

Boyack thinks if the question were phrased differently, it's likely even more Utahns would support the legislation set to be considered by lawmakers next year.

"I feel like the question doesn't accurately represent what's being done in this legislation," Boyack said. "Rep. (Lowry) Snow is not simply doing away with the death penalty and leaving nothing in its place. His is an effort to replace it with something that will allow for aggravated murders to have a harsher penalty, give prosecutors another tool they can use to pressure defendants into a plea deal of some sort."

If the poll's question were phrased to indicate the death penalty would be replaced with a new sentence of 45 years to life — in addition to life in prison without parole, which is already on Utah's books as a sentencing tool — Boyack said he thinks even more Utahns would be supportive.

"We've seen that with legislators themselves, legislators who were a little uncomfortable with a straight repeal bill," he said. "I personally know of legislators I've had conversations with who when we explain that this is a repeal and replace bill, that there is a solution in the bill in addition to just taking the death penalty away, their support increases or they move from being a fence-sitter to supporting the bill." 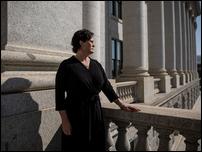 The Utah Legislature has struck down a capital punishment repeal twice before. What's different this time?

The three-member elected commission that represents the heavily Republican-leaning Utah County voted on Wednesday to throw its support behind the effort to repeal and replace Utah's death penalty.

"We call on the Utah Legislature to remove this option from state law, as nearly two dozen other states have, and replace it with alternative measures that can still help ensure justice is served," the resolution approved by the Utah County Commission on Wednesday states.

Utah County Commissioner Amelia Powers Gardner said she brought the resolution forward for consideration for several reasons. One is because as a fiscal conservative, she's struck by the fact that the average death penalty case costs $4 million.

Plus, Gardner pointed out throughout Utah County's history, prosecutors have only successfully tried two murder cases to the point of death row. Out of those two cases, one of them was executed, and the other died of natural causes in prison.

"While I'm not necessarily opposed to having somebody brought to justice through the process of an execution, what I'm keenly aware of is that due to the restraints on the death penalty that are placed on us by the Supreme Court, it causes appeal after appeal after appeal," she said. "And that creates a celebrity status for those on death row that costs the taxpayers millions of dollars, that re-victimizes families over and over again."

Gardner said she's not necessarily opposed to the death penalty, but "the fact that we've had almost 200 cases of people on death row exonerated in this country is very frightening to me."

"It is very frightening to me that any government gets to decide who lives and who dies," she said.

Gardner said there are two issues in politics that "I will not waver on." One of those issues is "parental rights, and the other is I am pro-life. Period."

"And that includes even an egregious crime," she said, "because I can guarantee you that the 18 so odd cases (nationally) that were exonerated on death row, it was an egregious crime and the people prosecuting it were sure that they had the right person. But apparently they didn't. And that frightens me."

Commissioner Bill Lee voted in favor of the resolution along with Gardner. Only Commissioner Tom Sakievich voted against.

"If we avoid the resolution, we allow him that latitude to continue to decide which way he wants to go with that while working with our state representatives," Sakievich said.

The commissioner said neither the resolution nor the repeal and replace legislation address the "underlying issue" of decadeslong "back and forth, lifelong" appeals for every murder.

"You mentioned that you are pro-life," Sakievich said to Gardner. "I am definitely pro-life. And that's all the more reason why I say the punishment should always match the crime."