BYU running back Tyler Allgeier carries the ball during the first half of an NCAA college football game against Washington State, Saturday, Oct. 23, 2021, in Pullman, Wash. (Young Kwak, Associated Press) 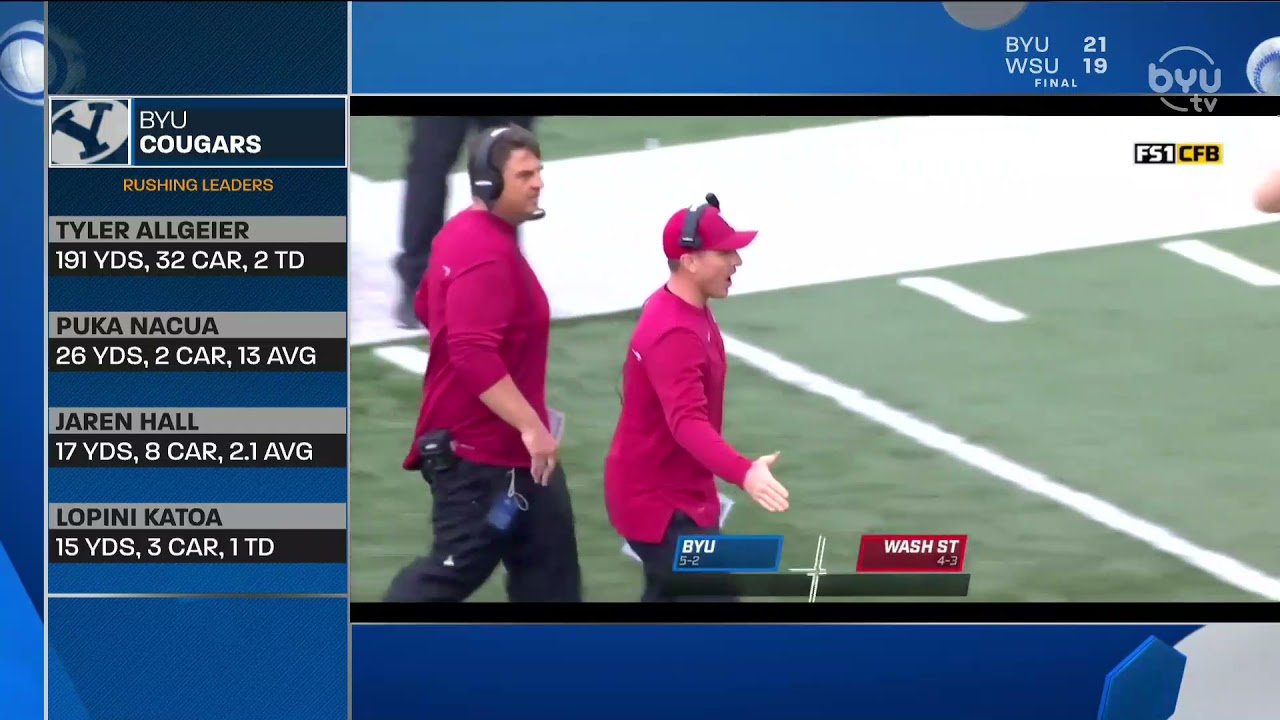 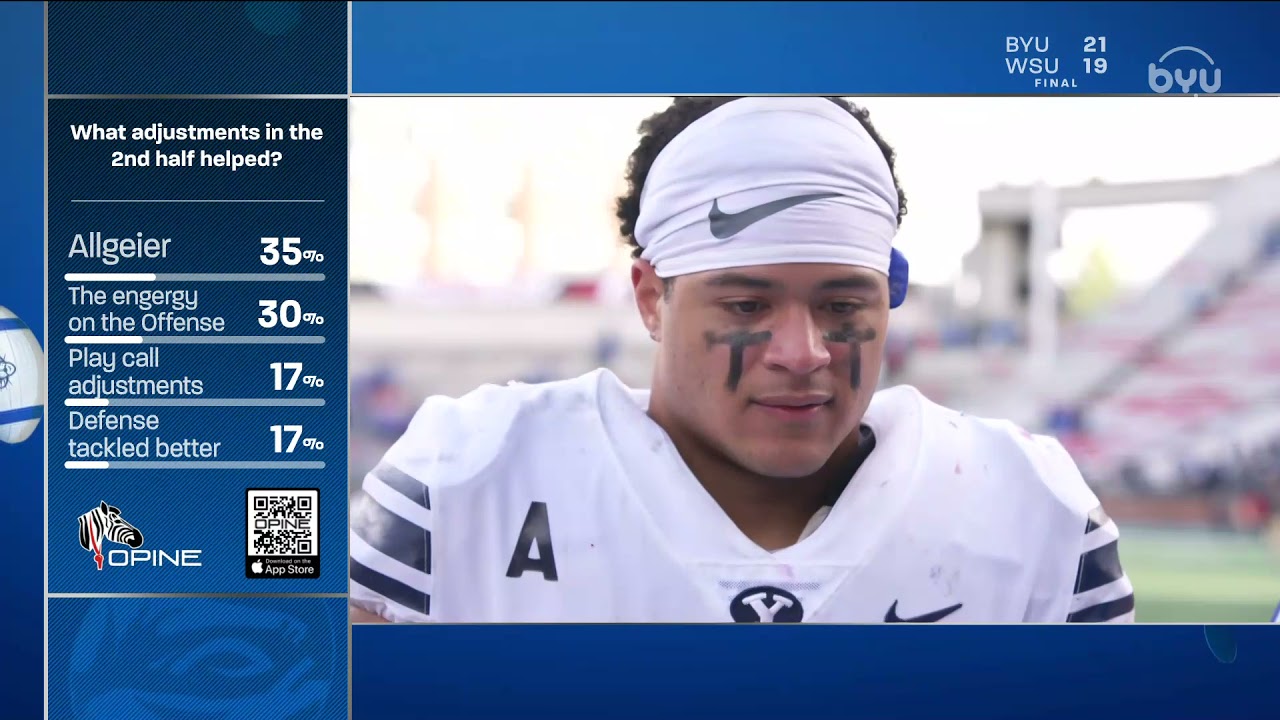 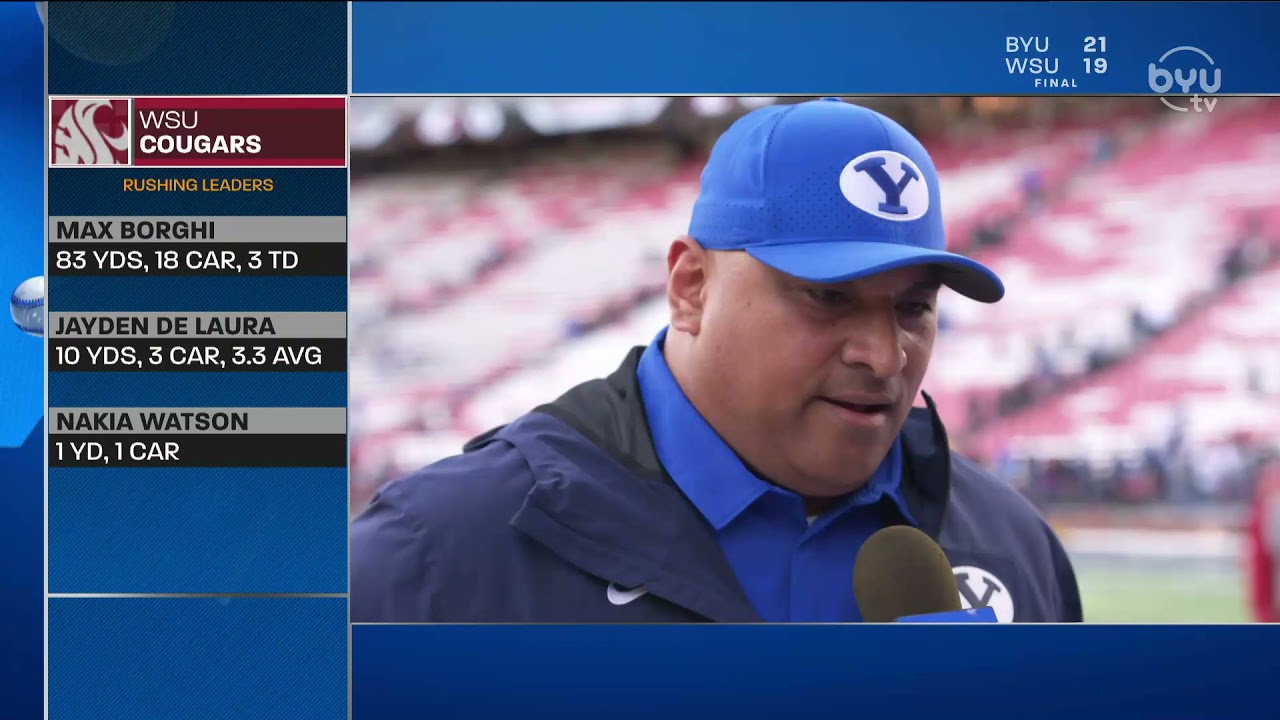 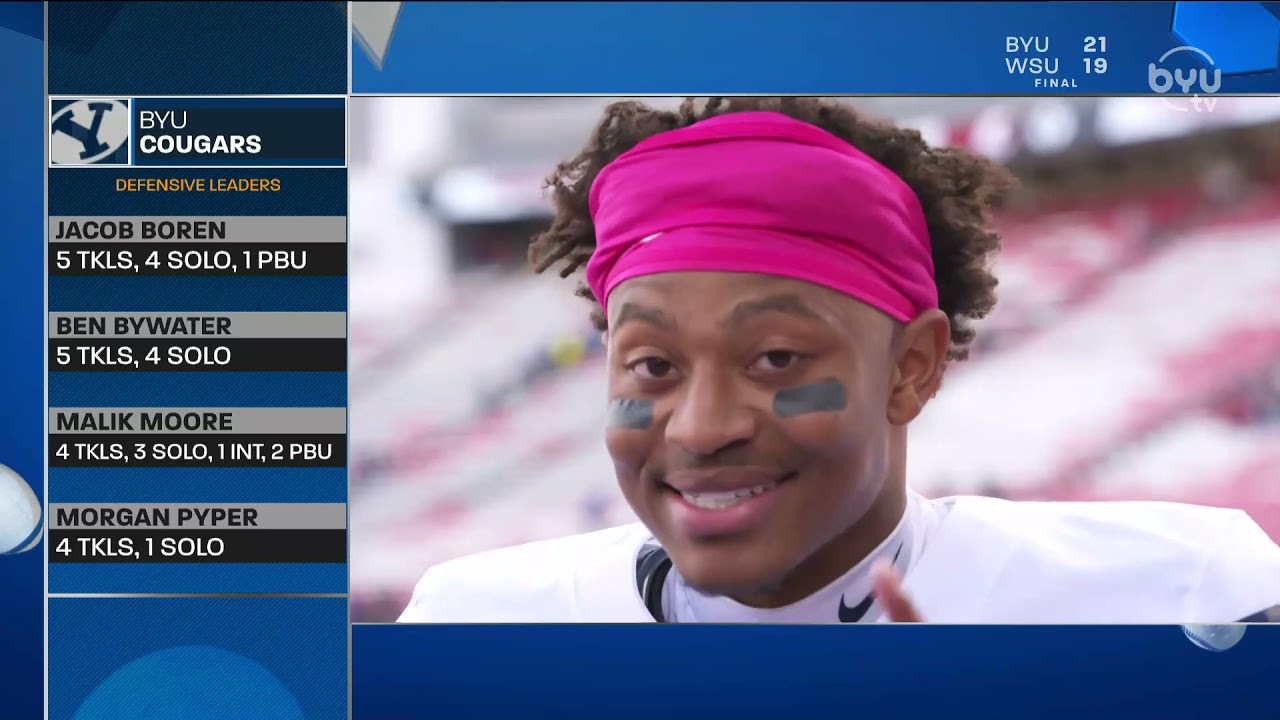 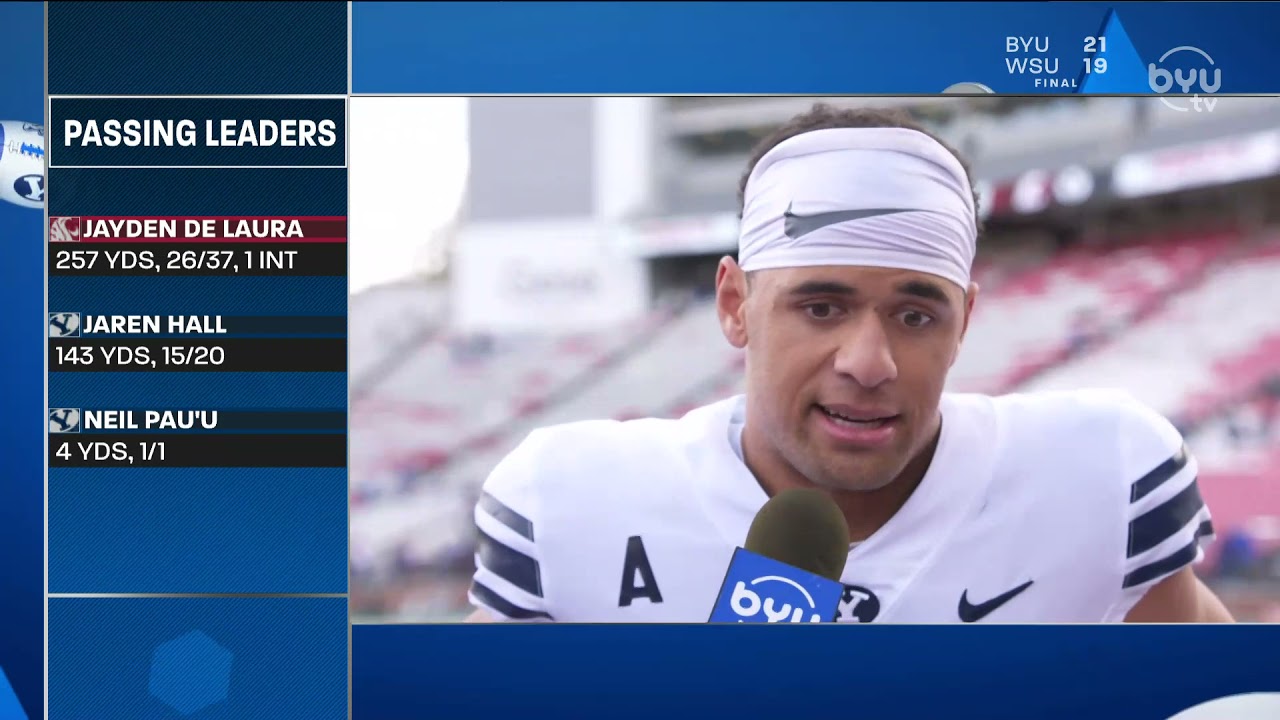 PROVO — BYU got its mojo back Saturday afternoon in the Palouse.

Jaren Hall threw for 143 yards and Tyler Allgeier added a punishing 191 yards and two touchdowns on the ground as BYU snapped its two-game losing skid with a 21-19 win over Washington State in the visiting Cougars' first-ever trip to Martin Stadium in Pullman, Washington, in the five-game series history.

Neil Pau'u caught six passes for 70 yards to lead BYU (6-2), which improved to 4-0 against the Pac-12 — the first time the Cougars have ever beaten four Power Five opponents in one season.

Max Borghi ran for 83 yards and three touchdowns to lead Washington State (4-4), which was playing its first game since the firing of former coach Nick Rolovich for failing to comply with the state of Washington's COVID-19 vaccine requirement for all state employees.

But in the battle of titan tailbacks, Allgeier held the edge.

"I like the play calls — I like what our guys did up front," BYU coach Kalani Sitake told BYUtv immediately following the game. "The O-line made good adjustments.

"I think they were a little bit embarrassed last week … and I thought they followed it up this week, but on both lines."

Even more impressive was that BYU ran the ball the way it did starting center James Empey saddled with an apparent ankle injury in the second half.

"It's just trust," said Allgeier, who surpassed the 2,000 career rushing yard mark in the win. "From bottom to top, if one guy gets injured, we have trust in the next guy to step up and get the job."

With BYU's 4-0 record against the conference combined with Utah's fellow undefeated mark in league play, the two schools improved to a combined 7-0 in Pac-12 play (admittedly, one of those wins is BYU's 26-17 win over the Utes). Add in Utah State, and the three Beehive State universities improved to 3-0 against Washington State — including two on the road, even if Saturday's game was overrun by blue-clad BYU fans.

If the Cougars were Pac-12 members, their four wins would lead the conference.

But it was the host Cougars' inability to stop the run — specifically, Allgeier — that clinched bowl eligibility for BYU for the 16th time in 17 seasons.

"We needed this win," Sitake said. "Now we've got to go learn and get better. There are a lot of mistakes we made as a team, but I'm just happy to be able to get better."

BYU played to a 7-7 stalemate through the first half, but that was mostly due to defense and special teams. Malik Moore had a first-half interception, his team-high third of the year, and Ryan Rehkow added a casual 66-yard punt while averaging 48.5 yards on two punts to keep the Crimson Cougars down.

Atunaisa Mahe also had a key sack in the second quarter, and the visiting Cougars kept the home Cougars locked up, 7-7 at the break.

"I think we brought it a little more in the second half than we did in the first half," said Moore, who also had four tackles, two pass breakups — and should've had 1-2 more picks. "They were just pounding it and pounding it. But then we woke up, and shut down the run game, as well as the pass game."

After the break, the visiting Cougars took a new approach. Hall led an 11-play, 75-yard drive for a score on the visitors' opening possession, capped by Allgeier's 4-yard touchdown with 9:48 left in the third.

That drive included Hall's 4-yard reception from Pau'u, the former Servite High quarterback who has become a regular in BYU's wildcat packages.

Washington State responded with Borghi's second rushing touchdown of the game, but failed on the broken PAT as BYU took a 14-13 edge into the final period.

Washington State responded with an 11-play, 76-yard drive that included three-straight potential scoring plays to Borghi before the tailback rumbled in for a 1-yard touchdown with 4:14 remaining.

But the missed PAT forced the host Cougars to go for two, and de Laura's pass attempt under pressure failed to preserve the 2-point lead.

The visiting Cougars outgained the hosts 242 yards to 93 on the ground, led by Allgeier's 191 and 26 yards from wide receiver Puka Nacua. Lopini Katoa added 15 yards on the ground, including BYU's opening score on a 3-yard touchdown to open the game.

Washington State quarterback Jayden De Laura threw for 257 yards with an interception, and Travell Harris caught seven passes for 60 yards for the home Cougars, who limited the visitors to 147 yards in the air while trying to play physical at the line of scrimmage — much like Baylor did in handing BYU a second-straight loss a week ago for the first time since the end of the 2019 season.

"We literally just watched the film from Baylor," Allgeier said. "They really stopped the run, but I knew Wazzu wanted to stop the run, too.

"We literally just schemed it and just hammered it today."