Have You Seen This? You've got to love this soggy soccer game

A soccer team scores a goal during a very wet game. (Luis Miguel Echegaray via Twitter)

THE EYE OF THE STORM — Bad weather can definitely ruin a sporting event. Anyone who has played football in freezing rain, run a marathon in a heat wave or tried to pole vault in a tornado can attest to this.

Other times, the weather only adds a fun dynamic to the game. Take this rainy soccer game in England, for example.

I love all of this pic.twitter.com/bklKjZHImT

The field is so waterlogged that the ball just stalls out rather than go where players anticipate. But this only added to the intensity, as players are forced to run around willy-nilly to reach passes. You'd be tempted to say the ball had a mind of its own, but that poor ball looks as exhausted and confused as the players.

The best part of a soggy game like this is that you can bust out an epic victory slide to celebrate a goal. The worst part is you'll get a face full of mud if you lunge to defend the goal and end up missing.

Finally, you have to respect the fans at this game. They're undoubtedly cold and wet, but their intensity is contagious. Perhaps it's all the cheering that helps motivate the players to keep slogging around on the turf even though the rain has made a mockery of all their strategies and plays. All that matters, rain or shine, is that your players find the back of the net. And during this storm, the home team did just that. 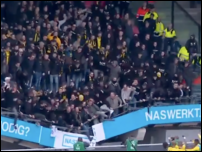 Loyal soccer fans keep cheering even after stands collapse under them

If you've attended a live sporting event, you know how thrilling it is when everyone starts jumping around in unison. But when that much weight gets thrown around there can be some unintended consequences.
×