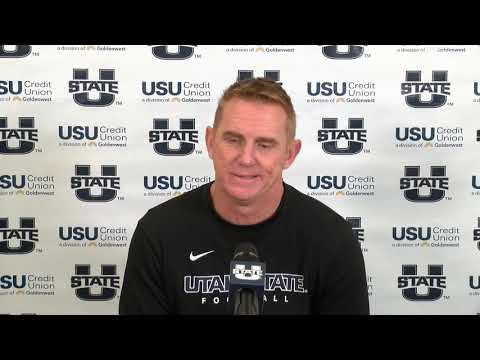 LOGAN — It's amazing what a new coaching change can do.

Blake Anderson and his staff stepped into Logan with the goal of revamping the attitude and culture of the Utah State football team, and the student-athletes have completely embraced it.

The buy in has paid massive dividends early in the season. An Aggie team that went 1-5 just last fall is now 3-0 for the first time in 43 years. One more win and they'll have reached the over on the amount of wins several sportsbooks in Las Vegas set for them, which was 3.5 before the season started.

All three wins have been won in ways only teams with mental toughness, physical durability and an unrelenting confidence could manage.

Saturday night in Colorado Springs was no exception. Multiple times throughout the game, the Aggies could have given up. They found themselves trailing Air Force 24-13 in the second quarter, 31-20 in the third quarter, and 45-34 in the fourth quarter.

There were times when the Falcons offense looked unstoppable, finishing the night with 617 yards of offense. It seemed every time the Aggies narrowed the score, Air Force immediately responded. But Anderson's guys kept on pushing, and two unanswered touchdowns in the fourth quarter lifted them to victory.

This undying effort was something Utah State didn't have under Gary Andersen in his second stint as head coach, and frankly, wasn't common under Matt Wells, either.

Now, winning after being down double digits is commonplace. The Aggies have done it in each of their first three games, the first time winning back-to-back-to-back games in that fashion to start the season in school history.

"The kids deserve all the credit, they really do," Anderson said. "They're just so resilient and have given us unbelievable attitudes and effort every day. And they're growing together as a family and really enjoying what they're doing."

The resiliency, in part, has to do with what the Aggies experienced last season.

Getting outscored 211-93 seemed to have brought the team to their knees. And for the players that returned, their motivation to turn things around in 2021 may be unparalleled.

That is the perfect storm for Anderson — a compassionate coach, yet one with authoritarian leadership characteristics — to come in and expect results.

"You know last year was a long season, so finally this team is coming together," said junior quarterback Andrew Peasley. "We don't really look back on the past a lot, it's always the future and what's ahead of you, so I think the team is just really buying into what coach Anderson is planning."

One philosophy of Anderson's, which has been bought into in a big way, is being the "toughest" and "fastest" team on the field. He's explained on numerous occasions that if his team is in better shape than the opponent, they'll have the competitive advantage toward the end of games, even if they're inferior in talent.

The players worked in the offseason to make that philosophy are part of the team, starting with the strength and conditioning program run by strength coach Paul Jackson. Numerous players mentioned how those workouts, despite being grueling, enhanced their physical ability and endurance for the season.

"The coaches came in with a blueprint and we just followed it step by step," senior defensive end Jaylin Bannerman said. "You've got to give it to coach P Jack, he got us right in the summer. All work. Make dogs, no pups. That's how we went at it every day, and it's working out for us.

"I knew it was going to be worth every little bit so I never questioned it. I just went and worked."

Along with the traditional weight gain workouts, Jackson had the team do more cardio work — seemingly endless reps of sprints, power cleans and box jumps were the daily norm.

And now, their conditional level has shown off on the field. Utah State has outscored opponents 51-10 in the fourth quarter. On Saturday, they overcame an 11-point fourth quarter deficit to win the game.

"Our run game got better. Our protection got better. We started beating them to the ball on defense — we were not doing that earlier. And we created turnovers," Anderson said. "I think in every aspect we need to continue to play it at a high rate of speed. And you could see fatigue setting in on them and that's what I tell my guys: Keep it close and in the fourth quarter it's gonna pay off."

Beyond the buy in on workouts and the overall belief about the team's goals, there's a high level of trust schematically from the players.

Peasley, who stepped into Saturday's game in the third quarter after starting quarterback Logan Bonner got knocked out of the game, said he was "confident" with offensive coordinator Anthony Tucker's play-calling decisions. He didn't have to do anything "special" to throw for three touchdowns and 195 passing yards, rather just "execute the offense."

Yes, through the transfer portal, the talent level on the Aggies roster was upgraded. Guys like Rice, Bonner and junior running back Calvin Tyler Jr. have been invaluable additions to the roster. But the majority of the starters on both sides of the ball were on last season's team.

Senior receiver Deven Thompkins, who was on last year's team, currently leads all of FBS with 454 receiving yards. Peasley, and four of the starting five offensive lineman, were also on last year's squad. And of the current 12 leading tacklers on the defense, 10 of them were on last season's roster.

This biggest difference between this season and last hasn't been a change in personnel, but a change in the expectations, attitude and ability of the existing personnel.

And the coaching staff, beginning with Anderson, has fostered that change.