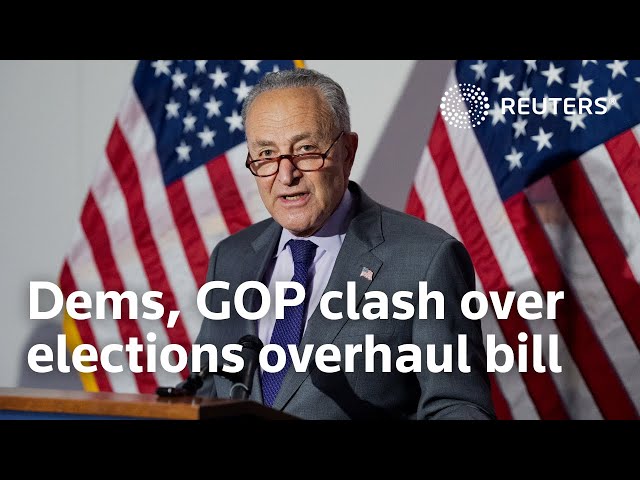 WASHINGTON (Reuters) — Democrats in the U.S. Senate on Tuesday pushed forward sweeping legislation on political campaigns and elections they argued would expand access to voting, even as Republican-controlled states rushed to impose new restrictions.

After a long day of sometimes rancorous debate between Democrats and Republicans on the Senate Rules and Administration Committee, the deep divisions were evident by the panel's 9-9 vote on approval. No Republican voted yes.

Because of the tie vote, Senate Majority Leader Chuck Schumer is expected to take procedural steps to bring it to the full Senate for debate and a vote, according to committee Chairwoman Amy Klobuchar, a fellow Democrat.

Under current Senate procedures, Republicans in the 100-member Senate can block passage of a bill unless at least 10 of them vote with Democrats in support of it, an unlikely outcome.

Among the bill's provisions are requirements that states expand mail-in voting, which was used widely in last year's presidential election because of the coronavirus pandemic. It also would lengthen the hours of in-person balloting.

With scores of amendments offered, the nine Democrats and nine Republicans deadlocked on most, leading to their defeat.

The panel did, however, approve a Republican amendment prohibiting voting rights for anyone convicted of crimes against children.

The unusual appearance of the Senate's top Democratic and Republican leaders at the committee's work session underscored the stakes, with the legislation being advanced as the November 2022 congressional elections come into focus.

"The bill before this committee has a very simple premise: make it easier, not harder, to vote," Schumer said.

He devoted most of his remarks, however, to the slew of election-law changes being enacted in Republican-controlled states this year, characterizing them as anti-democratic. "They carry the stench of oppression," Schumer said.

The Senate bill and a similar one passed by the House of Representatives in March with no Republican support go beyond election reforms. They also attempt to end the partisan way in which congressional districts are drawn and curb "dark money" campaign contributions that obscure the identity of donors.

The Democrats are pushing the changes as former President Donald Trump continues to falsely claim that his election defeat in November was the result of widespread fraud.

Sen. Mike Lee defended President Donald Trump raising the specter of fraud regarding mail-in voting, although he acknowledged that the practice has worked fine in Utah.

"This legislation would let Washington Democrats dictate the terms of their own re-election races by rewriting all 50 states' election laws," McConnell said.

He zeroed in on provisions he said would foster fraudulent elections by loosening voter identification laws and allowing people to collect and turn in other voters' ballots, such as for those in remote locations or in nursing homes.

That follows Georgia's enactment in March of a far-reaching Republican bill that includes a prohibition on offering food or water to voters waiting in long lines.

A Reuters/Ipsos national opinion poll found in March that 81% of adults said it was "very" or "somewhat" important that the government make it easier for people to vote. But the poll also showed that 74% found it equally important that new limits on voting be imposed to protect elections from fraud.