'I don't think we took it seriously': Wounded Jazz fall to Suns as Phoenix takes over No. 1 seed 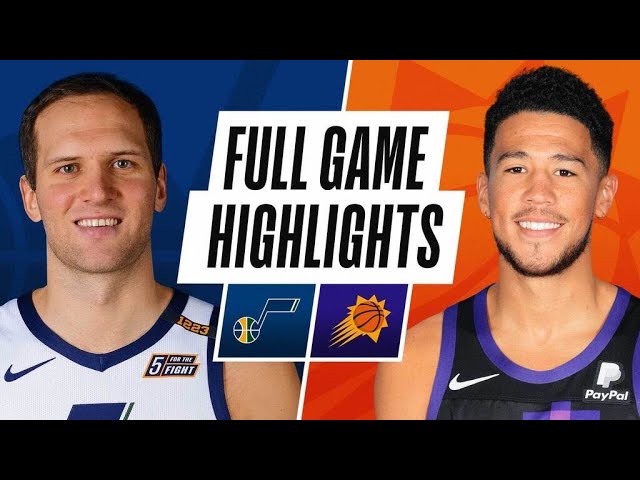 SALT LAKE CITY — It was a game between the two top teams in the entire NBA, and a battle for the top spot in the West. Yet, the most interesting thing about it was the mystery of why Rudy Gobert didn't start the second half.

It speaks to how the game went that it didn't really become a mystery until Gobert was put back into the game. Up until that point, everyone just assumed that he was taking the last 24 minutes off. In hindsight, he might as well have.

The Utah Jazz, sans Mike Conley and Donovan Mitchell, didn't put up much of a fight against the Phoenix Suns on Friday. Phoenix beat Utah 121-100 to take over the No. 1 seed in the Western Conference with nine games remaining in the regular season; both teams are tied at 45-18, but the Suns hold the tiebreaker.

With those kinds of stakes on Friday, you would have expected the game to have a raised atmosphere; it didn't. The absence of Conley and Mitchell weighed heavy on the game, and once Phoenix jumped out to a 16-point lead behind some spectacular play from Devin Booker, well, it felt like it could have been called right then and there — and neither team would have complained.

At least that's how Gobert, who missed the opening of the second half because he was in the bathroom (mystery solved!), saw it.

"We started the game without any of that, so it became a frustrating night for us," he continued. "I don't think we took it seriously as we should as a team. It didn't feel that way. I think the coaching staff were very focused. As a team, I just feel like we didn't, you know all of us, we just were like, 'If we lose, it's OK because we're missing some guys.' I think we need to change our mindset."

The Jazz's built-in excuse was one that made any result from Friday mostly empty. As big as the result may be at the end of the season, the actual tape isn't going to mean anything come playoff time.

Of course, the Suns should have beat Utah without two of its All-Stars and with the Jazz shooting 44% from the field.

The Suns had been a pain for Utah to play even with Mitchell and Conley — remove those two, and things were just ugly. Bojan Bogdanovic had 22 points, Joe Ingles and Jordan Clarkson both had 12, and Matt Thomas had 10 garbage-time points. Those were the only Utah players in double digits.

"They're trying to take away our pin down action, they deny all of our handoff and screening action, so, I mean, without Donovan and Mike it's really a different story," Bogdanovic said. "For us to put up the numbers and then play good offensively, we got to guard and run. If we don't play defense, like was the case in the first half tonight, it's tough; it's tough for us to play against set defense."

That is why Gobert's teammates didn't agree with his sentiment that they didn't take things seriously. They just felt they were outplayed by a team that was healthier than they were.

"I think that every single player played pretty serious tonight, but it's how it is. I think that we didn't execute both offensively, defensively," Bogdanovic said.

Nine games to be exact — and those games will determine who is No. 1 and who is No. 2. Even with the loss, the Jazz are still projected to be the top seed at the end, but the margin of error has become razor thin. Another unexpected loss or another unexpected Phoenix win and the Suns will be the favorites. Maybe that's what the Jazz want? The Gobert bathroom trip was interesting — and Snyder didn't immediately put him back in. Utah also played Trent Forrest and Jarrell Brantley in the first quarter. The Jazz could have wanted to keep their seeding options open down the stretch.

On paper, Friday's game should have been the most important of the year. It sure didn't feel that way. Utah has other goals that have made the end of the season feel like the Jazz are walking on eggshells. They just want to get through it as healthy as they can.

"The most important thing we can do is to continue to try to get healthy," Jazz coach Quin Snyder said when asked about the seeding.

Utah will have an update on Mitchell's status Saturday and Conley continues to be a game-by-game situation. With some good news, the Jazz may just be able to fully focus on getting the best seed possible because, yes, that is still important. Or at least they are claiming it is.

"I mean, we don't know who we're gonna play, but it's important to have a home-court advantage and have that in your mind that you're gonna play one more game at home, no matter who you play," Bogdanovic said. "Especially how we play at home and the score that we have at home this season, it's big time.

"I think that we have to be all locked in for first place. It's not going to be easy without Donovan and Mike. I hope that they're going to be back as soon as possible, get their shape back and to put the team together again."