'I screwed up,' says woman serving time for death of disabled adult kept in closet

SALT LAKE CITY — Cassandra Marie Shepard says she knows she messed up. But not in the way that was portrayed in news reports, she said.

"I screwed up," Shepard said. "It's something that will always be with me."

Shepard was the guardian of Christina "Nina" Harms who was 22 but suffered from fetal alcohol syndrome and had the mental capacity of an 8- to 12-year-old, according to prosecutors.

After Harms' biological mother died, Shepard became Harms' guardian. She eventually moved to Utah from South Dakota to live with her mother, stepfather, her own two children, Harms' baby and Harms.

On March 25, 2011, Harms died as a the result of abuse and neglect. In 2013, Shepard pleaded guilty to aggravated abuse of a disabled adult and manslaughter and was sentenced to a term of five years to life in the Utah State Prison.

Shepard, now 37, went before the Utah Board of Pardons and Parole for the first time on April 6. While she was described during her original sentencing hearing as "stoic" and did not speak during the hearing, Shepard was very talkative during her hourlong parole hearing in addition to submitting a detailed written letter to the board about her crime. But at times she seemed to lose track of her thoughts and lose focus on the question that was asked.

In a recording of the hearing, Shepard told board Chairwoman Carrie Cochran that she wanted to make sure she got to explain what really happened with Harms' death and not "other people's dramatic views."

"I grew up thinking Nina was a pure soul, like a child," Shepard said. "I love Nina."

During her trial, prosecutors stated that Harms was constantly kept in a small closet where she was forced to eat and go to the bathroom while being bound to a metal bar. She had ligature marks on her ankles consistent with plastic zip ties when officials examined her, severe bruising on her thigh and head, bloodshot eyes, a pepper seed in one of her eyelids, and her hands were completely covered with bandaging material, which would have prevented her from getting the pepper seed out.

Shepard "tied her (Harms') hands together and put tape around her mouth and (Harms) never got to come out," a child witness told investigators, according to charging documents.

The cause of Harms' death was listed in court documents as "positional asphyxiation."

But during her parole hearing, Shepard denied doing any of those things to Nina.

"I did not personally secure zip ties," she said, while later also stating, "That pepper seed was not put there by me."

As Shepard talked to the board about the chain of events that brought her to Utah, she explained how after Harms' mother died, some personal problems arose in Shepard's life that prompted her to send Harms to live with her mother and stepfather in Kearns. But several months later, her mother called to say Harms was acting out, which prompted Shepard to also move to Utah.

Shepard said she felt she had no choice but to move to Utah, but had hoped everything would work out. However, "everything got significantly worse when we were in that apartment," she said.

According to Shepard, they had lived in Kearns for 16 weeks when Harms began acting out again in February 2011, about a month before her death.

"One minute she's 22 and the next she's acting like a small child," Shepard said.

She told Cochran that Harms began hiding behind the couch or in the closet — possibly as a way of getting attention. Shepard also claimed that while she was trying to organize her house she had a lot of tape and zip ties lying around and believes Harms put those on herself like a bracelet or piece of jewelry. She also contended during the parole hearing that Harms put tape over her mouth herself and that caused her to have an allergic reaction, which created blisters.

It was also during this time that Shepard was dealing with her own personal issues and said she was feeling overwhelmed. Ultimately, she contends she did not personally tie up Harms or put tape over her mouth, but she didn't do enough to prevent it. 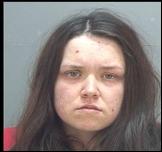 Those who loved Christina "Nina" Harms drove 1,500 miles from their homes in Minnesota and South Dakota to stand in front of a judge Friday and tell them about the person they lost.

"I'm busy and I'm stressed," she explained. "By the time Nina died, at that point I did not care where she was at. I didn't care. ... I think this is where I messed up the most is I stopped caring."

Shepard added that she felt "defeated" by the time Harms died.

Her mother, Sherrie Beckering, and stepfather, Dale Beckering, were also convicted in connection with Harms' death. Both claimed that they were not aware of the abuse taking place.

But during her parole hearing, Shepard said, "They were very aware of everything."

Shepard said she has not spoken with Dale Beckering since being sent to prison.

She has had close contact with her brother, however, and hopes to live with him in South Dakota if she is granted parole. Cochran cautioned Shepard that in order for her to be successful, she will need support and structure and live in a safe environment. She will also need to continually address her mental health needs and stay current on her medication, Cochran said.

The full five-member board will now vote whether to grant parole.