WASHINGTON (Reuters) — The U.S. Centers for Disease Control and Prevention on Monday extended through June 30 a nationwide order to prevent millions of U.S. renters from being evicted amid the economic fallout from the COVID-19 pandemic.

The CDC's moratorium on most residential evictions — which the agency justified citing the public health crisis — had been set to expire on Wednesday.

"Keeping people in their homes and out of crowded or congregate settings — like homeless shelters — by preventing evictions is a key step in helping to stop the spread of COVID-19," CDC Director Rochelle Walensky said in a statement.

The order was initially issued by the Atlanta-based agency in September during former President Donald Trump's administration. It was extended on Jan. 29 through the end of March after President Joe Biden took office.

The White House noted that as of January one in five U.S. renters was behind on rent. The CDC said a March survey by the U.S. Census Bureau found that more than 4 million adults who are behind on rent fear imminent risk of eviction.

The U.S. Congress approved another $21.5 billion in emergency rental assistance this month on top of $25 billion approved in December. 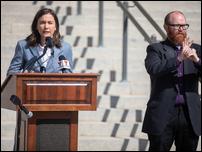 Utah tenants short on rent in the pandemic can now apply online to tap into a new infusion of $215 million in federal rent relief money.

The moratorium has been challenged in court, and two federal judges have ruled against it. U.S. District Judge J. Philip Calabrese in Akron, Ohio, ruled on March 11 that the moratorium exceeded the authority given to the CDC by Congress, but stopped short of issuing an injunction blocking it.

The order applies to individual renters who do not expect to earn more than $99,000 this year or $198,000 for joint filers. It also applies to renters who did not report income in 2020 or received a stimulus check.

Renters must file sworn declarations saying eviction would leave them homeless or force them into a "shared living setting" and attest they have done all they can to get government assistance for rent or housing.

(Reporting by David ShepardsonEditing by Chizu Nomiyama and Will Dunham)