CEDAR CITY — A man who was shot by Cedar City police on Valentine's Day was transferred from a hospital room to a jail cell Friday and was charged with three felonies.

Larry Joseph Lee Tessier, 36, is charged in 5th District Court with two counts of aggravated assault and failing to stop at the command of police, third-degree felonies.

Earlier in the day, Tessier was released from St. George Regional Medical Center and was booked into the the Iron County Jail. Police say he could still face additional criminal charges as the incident is still under investigation by a multi-county critical incident task force.

The incident began about 8 p.m. on Feb. 14 when a man and woman were sitting in a car in the driveway of a Cedar City home. The male driver said as he pulled into the driveway, he heard another vehicle pull in behind him. When he exited his car, the other driver approached him and "began punching him," according to a charging documents.

The attacker then "pulled out a pocket knife and attempted to stab (the victim)," the charges state. The victim's date and two of his neighbors began wrestling with the attacker, trying to pin the hand holding the knife to the ground while the victim managed to break free and run into his house.

Two officers were on their way to the house, answering calls for help, when they say they saw a car matching the description of the attacker's vehicle. 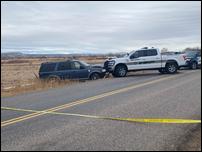 A 36-year-old man suspected in an assault case was critically injured after he was shot by police following a pursuit in southern Utah Sunday night, authorities said.

"Officers stopped the vehicle and ordered the driver out of the vehicle," the charges state. "The driver refused to comply and kept reaching for objects inside the vehicle."

Officers recognized the driver as the suspect, and one officer saw that he had blood on him. At that point, the driver allegedly sped away from the officers and they pursued him with lights and sirens.

Police used "a tire deflation" device in an attempt to stop the car, which spun the vehicle 180 degrees. With the car now facing officers' vehicles, the driver rammed one officer's car head-on, according to court documents. Then the driver reversed into a ditch and fence, which made officers think the car was disabled.

But the driver was able to accelerate the car toward the officers, who were now on foot, and four officers fired their weapons at the vehicle, injuring the driver, the charging documents say.

Tessier was on bail in a separate criminal case where he is charged with aggravated burglary, a first degree felony.