SALT LAKE CITY — It's a classic debate about private property rights and local control — and at what point, if any, should the state step in to play referee.

At the center of it all? Accessory dwelling units, more common called mother-in-law apartments.

A Utah bill seeking to remove barriers for these units has the weight of legislative leaders behind it, but it may be watered down before it can clear its first hurdle.

In its current form, Rep. Ray Ward's HB82 would prohibit Utah cities and towns from setting what Ward called too many "roadblocks" in the way of Utahns wanting to rent out their own basements. It's an issue that Ward and other lawmakers argue is overcomplicating less-expensive living options while the state's housing crunch continues to blast home prices sky high.

The bill is only looking to deal with internal accessory dwelling units, or apartments that would exist inside the existing footprint of a single-family home, such as a basement. It wouldn't touch cities' regulations on detached dwellings or home additions.

The bill would permit these internal accessory dwelling units anywhere cities currently allow them. It would require cities and counties to classify certain units as a permitted land use and would prohibit municipalities from establishing restrictions or requirements for the construction of the internal apartments.

This is one of the most important things and biggest things I think we can do to help address the (housing crisis).

Additionally, Ward's bill would require the state's Olene Walker Housing Loan Fund to start a program to provide low-interest loans to help finance construction or rental of the internal units.

The Bountiful Republican's bill has caught the attention of House Speaker Brad Wilson, R-Kaysville, and House Majority Whip Mike Schultz, R-Hooper, who have thrown their support behind the bill's concept as a "free-market" approach to tackling at least part of Utah's affordable housing crisis.

But the bill was held in a House committee Friday after Schultz, who is also a homebuilder, sought more time to work through some proposed changes that would allow cities to regulate certain aspects of these basement apartments, such as limiting the number of bedrooms to two, a parking space requirement and more.

"This is one of the most important things and biggest things I think we can do to help address the (housing crisis)," Schultz said after about an hourlong public hearing on the bill, which drew proponents and critics to testify in front of the House Business and Labor Committee on Friday. 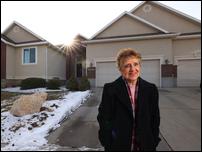 Accessory dwelling units — an answer to the affordable housing problem?

With housing prices along the Wasatch Front skyrocketing, civic leaders and housing advocates are considering numerous alternatives to mitigate the issue of housing affordability.

Affordable housing advocates support the bill as one that would help expand housing options and act as a step toward addressing housing affordability in Utah. But detractors, including some local mayors and city council members, worried it would strip cities of their regulatory powers to protect neighborhoods from negative impacts.

Victoria Ashby, director of government relations for the Utah League of Cities and Towns, said it's a "difficult bill" because her organization representing Utah's 248 cities and towns agrees on the need to expand affordable housing options but disagrees "on the course and solutions to take."

"Our biggest issue with this bill is the one size fits all," Ashby said. "Different communities are different. ... Think about communities that have universities or historic districts. How are those cities going to handle the extra capacity brought to them?"

Ashby said the Utah League of Cities and Towns isn't "opposed to internal (accessory dwelling units)," pointing out that over 60 cities have recently adopted ordinances for them on top of the cities that already had them. The issue, she said, is local control.

"I really think the bottom line is to understand the mandate in this bill is treating all those cities the same," she said. "And when our mayors and city councils ... sit down and look at these policies, they're trying to balance the interests of everyone living in these communities and the issues that they're facing when they're bringing in more capacity."

Our biggest issue with this bill is the one size fits all. Different communities are different.

Provo City Councilwoman Shannon Ellsworth said she wasn't opposed to renters or accessory dwelling units, but she urged lawmakers not to pass the bill, saying it would "sink Provo city." She said more than 80% of her constituents told her along the campaign trail they had issues with parking or rentals. Even today, Ellsworth said, city officials aren't "keeping up with code complaints."

"I support (accessory dwelling units) in Provo and have been working proactively to loosen our restrictions and reduce barriers," she said. "We'll do this on our own because it's the right thing to do, but we need to do it at the local level to be successful."

Ward, who discussed his bill with reporters in a media availability with the House speaker earlier Friday, acknowledged city officials usually balk when the state tries to "meddle" in their local affairs. But he argued in some situations the state needs to step in.

"Letting cities be the only ones to do it brings up a very fundamental unfairness," Ward said. "And that is cities respond to the needs and complaints of the people who already live there. So the ones who are already in the neighborhood, who don't want any change, they get all voice and all the vote."

For the people who currently don't have a place to live, Ward said, "they don't know which city council to go beg for help from. They don't get any vote."

"Look, we're not trying to stomp all over what the cities do, but there needs to be somebody who considers both of those two groups ... and sets a basic ground rule," Ward said.

Ward said current local regulations — some of which place caps on square footage — make it too difficult for the average Utahn to navigate rules to build a mother-in-law apartment in their basement legally. And, he said, many are already being built, just illegally.

According to a summer survey conducted by the Utah League of Cities and Towns, Ward said only 10 of Utah's cities and towns responded they have permitted more than 25 accessory dwelling units.

Wilson, a powerful lawmaker on Utah's Capitol Hill, backed Ward, saying in some circumstances it's appropriate for the state to step in on local issues like accessory apartments.

"Local control and allowing cities to manage issue at a local level makes sense almost all of the time," Wilson said. "You do have rare circumstances, though, when there is a statewide interest. And our housing crisis, which, let's not kid ourselves, is becoming that if it's not that already, is a statewide interest and we need a statewide solution."

Tara Rollins, executive director of the Utah Housing Coalition, said she was glad when Ward brought his bill forward.

"We're very excited to see somebody really taking a chance," she said. "We would like to bring it to the finish line. We realize there's maybe some tweaking that needs to be done, but we think it's a good bill. It's not the solution for all affordable housing that's needed, but it's a portion of it. So we need to have as many solutions on the table to address this need."

Calling for the bill to be held in committee to work through a substitute bill, Schultz said lawmakers will work with Ward — who welcomed the extra time in committee — to find a solution.

To calls that the state put more resources into affordable housing, including more money for rental assistance, Schultz said it's an argument he's heard "time and time again" but one that simply pumps more money into housing and "compounds the problem."

"This is a free market approach," Schultz said of Ward's bill. "This is something that I think we can do that makes a significant difference in the problem we have. It's not going to solve the problem, but it really is the single biggest thing we can do to truly make a difference."

Correction: In an earlier version, a quote from Shannon Ellsworth said she's been working to loosen Provo's accessory dwelling unit barriers, but should have said reduce the barriers.