New mom off ventilator, out of hospital and cautioning others about COVID-19

10PM: New mom off ventilator, out of hospital and cautioning others about COVID-19
KSL TV

SALT LAKE CITY — A 24-year-old Idaho woman who had been on a ventilator in a Utah hospital cautioned others Monday to take all precautions recommended to avoid contracting COVID-19.

Jessi Jenson was discharged from Intermountain Medical Center in Murray on Nov. 16 after she was intubated and placed on an ECMO (extracorporeal membrane oxygenation) machine for several days during a nearly two-week hospitalization.

"Be careful," Jenson warned during an interview with KSL. "This isn't a joke. It doesn't really matter where it came from or why it's here or who started what — we need to be careful, we need to be washing our hands."

Jenson also encouraged people to pay attention to the science and research that has been done on the novel coronavirus.

The new mother found herself in a Boise-area emergency room on Nov. 2 after leaving the hospital the day prior with baby Gwendolyn.

"I remember them putting me on a gurney and the lady checking my oxygen and her saying, 'You're not breathing, honey,'" Jenson recalled.

It was one of the last memories Jenson said she had before being sedated and placed on a ventilator.

During that time, husband Benjamin Jenson said his wife was flown to Utah where it was believed doctors had greater expertise with the ECMO machine.

Jessi Jenson lost all recollection of what took place over approximately six days.

I was completely flabbergasted. I had no idea I had been so sick.

A week after being released from the hospital, Jessi Jenson said she still was dealing with a cough and weakness. She also said she couldn't see out of her right eye — something she said may be related to her low oxygen levels or a cardiac event. It was unclear whether or not her vision would return.

Still, Jessi Jenson said she considered herself "lucky" and was grateful to finally be able to spend time with her newborn.

A video recorded by family captured the moment Jessi Jenson held her baby after coming home from her lengthy hospital stay.

"I think I just sat there and cried for a little bit to hold her again; I'm really glad I got to see her again," she said. "I missed her a lot." 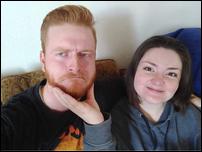 A new mother with COVID-19 remained on a ventilator at Intermountain Medical Center Thursday as her husband cautioned everyone to follow recommended precautions.

Jessi Jenson said the couple was extremely grateful for the support it received at a difficult time from so many people — including strangers who learned of their story through the news.

"I'm grateful and thank you so much—all of you!" she said. "Thank you."