SOUTH JORDAN — In his 16 years as a law enforcer, South Jordan Police Lt. Matt Pennington said a crime scene earlier this week was probably the most difficult one he’s ever been to.

On Thursday, police continued piecing together a timeline of the events leading up to the murders of two young boys — Seth Osborn, 8, and his brother, Ezra Osborn, 10 — who were shot by their father, 41-year-old Brian Thomas Osborn, who then took his own life.

While detectives hope they can narrow down when the tragic events occurred before being discovered, a motive for the horrific crime may never been known, Pennington said.

Just after 4 p.m. Tuesday, the boys’ mother, Sandra Ang, arrived home and found Seth in the living room that leads to the garage. She rushed him to the hospital, where he died from his injuries, according to police. When officers went to the house, they discovered the bodies of Seth and Brian Osborn in the basement, Pennington said.

Osborn and Ang were divorced in October, according to court records, and police say he has not lived in the Daybreak house with her or the two boys for several months.

That apparently changed approximately a month ago due to the COVID-19 pandemic and the statewide stay-at-home proclamations made by the state.

Ang, who works for Primary Children’s Hospital and is an essential worker, needed someone to watch her sons after schools and day care centers were closed, Pennington said. Osborn, who rented a basement apartment nearby, was not working due to his business being closed, he said. Osborn was asked to babysit the children when Ang went to work.

Pennington said detectives believe there was very little interaction between Osborn and Ang each time he watched their children. 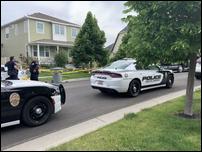 Officials on Wednesday identified the man and two boys who were shot and killed Tuesday in a suspected murder-suicide.

After the shootings, police served search warrants on Osborn’s apartment. Pennington said investigators found several journals that Osborn seemed to write in frequently. While there was nothing in the journals that indicated he would commit a violent act, Pennington said the writings point to possible mental illness because the contents are odd and “all over the place.”

The last contact police had with Osborn was in November, after his divorce was final, when they responded to reports that he had made threats to Ang and was possibly suicidal, Pennington said. When interviewed by police, Osborn said he was just angry and not serious about hurting anyone, according to police. He was not arrested.

In 2018, Ang and Osborn got into a verbal argument that prompted Ang to leave the house and call police from a nearby convenience store, Pennington said. No one was arrested in that case.

But it was the tumultuous behavior by Osborn that appeared to be part of the reason Ang filed for divorce, according to police. While Pennington does not know if Osborn was ever formally diagnosed with a mental illness, detectives have speculated whether that was an issue with him.

Neighbors in the Daybreak community are in shock over the tragedy.

“Ezra was such a sweetheart. He was always so pleasant,” said neighbor Brianne Campbell. “He always had a brightness in his face.”

Campbell said she taught Ezra in Sunday School, and he was the same age as her daughter.

“They were in the same Primary class and we were talking about the kids, and she was like, ‘Oh, I saw him at the park two days ago,’” she said.

A teddy bear and ribbons were placed around the house by neighbors on Tuesday.

For the officers who first responded to the house and found the bodies, Pennington said a peer support group is available for them to talk if they need it. Most of the officers in the department are young and some have children about the same age as Seth and Ezra.

“This is tragic on all levels,” Pennington said. “I can’t imagine what (Ang) is going through.”

A GoFundMe campaign was started to help raise money for funeral costs, calling the tragedy “an unthinkable loss.”