Utah 'hungry' for redemption as Pac-12 title draws near

With a towel draped over his head as he stared at the ground, it was a clear sign everyone should forget he was there. Teammates and Utah equipment staff quietly ushered media away from Mariner’s direction to give him space.

Mariner blamed himself for Utah’s loss in the Pac-12 Championship Game in 2018 and was silently suffering through his own guilt and frustration — the weight of the loss rested on a few missed opportunities in the title game.

Nobody needed to say it, Mariner just knew — even though no one actually believed it or blamed him. Still, a pass from backup quarterback Jason Shelley fell out of Mariner’s hands, bounced up off his leg and landed in the arms of Washington’s Byron Murphy, who returned the ball 66 yards for the only touchdown of the game.

Mariner was, again, robbed in the final seconds of the game when Murphy draped himself over Mariner’s back and interfered with a pass to seal a Huskies victory and a Pac-12 title. Regardless of whether Utah would have scored on the drive, the broken up pass by Murphy cemented a feeling of frustration that would ring to the core of every Utah player that night.

Washington didn’t win that game; Utah beat itself, many on the team felt. Never again would Utah experience that pain at Levi’s Stadium, was the collective thought.

Mariner transferred to Utah State after the season concluded, but the unsettled feeling burned deep for the rest of the team. Days after a Holiday Bowl loss to Northwestern in uncharacteristic fashion for the Utes, Zack Moss tweeted that he was coming back to Salt Lake City for his senior season to take care of some “unfinished business.”

The news was quickly followed up with word from defensive tackle Leki Fotu, defensive end Bradlee Anae and cornerback-turned-safety Julian Blackmon that they, too, would be back for their senior season to finish business.

“It's been a long time coming,” Anae said Saturday after his team clinched the South Division title for the second consecutive season. “A lot of us stayed back for this very reason, and so it's all about finishing.” 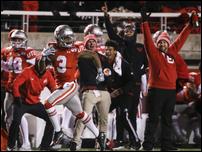 Utes up to No. 5 in AP Top 25, Coaches Poll after dominant win over Colorado

Utah closed out the regular season Saturday with a dominant 45-15 win over the visiting Colorado Buffaloes on senior day and to claim the South Division title in the Pac-12.

Utah’s singular focus in 2019 was to get back to the Pac-12 Championship game and avenge last season’s loss. Since workouts began in January, the team has approached the game with a focus and determination unlike any other Kyle Whittingham-led team before it.

“I love coaching this group. It is an absolute pleasure to be around these guys and to be able to work with them,” the head coach said after beating UCLA two weeks ago. “I don't think I've had to yell — maybe one time — all year, literally. It's a great group, senior leadership; and there's leadership beyond the seniors as well. They just take care of their business, and it's a very mature (team) — just a group that understands how to operate.”

Senior receiver Demari Simpkins described Utah’s season as being “hungry” and “relentless down the stretch.”

Utah, which was picked to win the conference in the preseason Pac-12 media poll, stumbled in the fourth game of the season and suffered its only loss to a USC team trying to save their head coach’s job. And with the Trojans holding the tiebreaker in the South Division after the loss, there was no other option but perfection down the stretch for the Utes — and they delivered in convincing fashion.

“We just didn't want to leave no doubt,” Simpkins said Saturday. “I felt everybody doubted us after that loss, and we just had something to prove.”

Utah claimed its third 11-win season in program history and outscored opponents an average of 27.3 points per game (29.1 points in Pac-12 play) to “leave no doubt.” More importantly, Utah proved, in various ways, it could handle each team’s best shot, and showed it can lead out as a top team, not needing the underdog mentality to drive the program.

The Utes will get their opportunity to showcase a season’s worth of preparation on Friday at 6 p.m. MST on ABC, once again at Levi’s Stadium. This time, though, Utah will enter the championship game with its starting running back and quarterback and a year’s worth of motivation backing their run.

A win could also provide the added benefit of a berth to the College Football Playoff, or a fantastic consolation prize of the “granddaddy of them all” in the Rose Bowl.