SALT LAKE CITY — A second man has been charged in connection with a fatal confrontation outside a Salt Lake convenience store earlier this month.

His charge comes on the heels of a murder charge filed against Tukka Gonne, 21, for allegedly stabbing 40-year-old Joseph "Joey" Allen.

On July 3, Allen was working at Maverik, 1270 S. Main. Another man was also in the store visiting him.

Two men entered the store "and were causing problems," according to charging documents. Allen asked the men to leave or he would call police. The men left, but then returned with two more males, according to the charges. 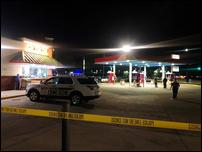 A convenience store clerk was killed and another man critically injured in a stabbing at a Maverik store early Wednesday, officials said. (Photo: KSL TV.)

Allen and his friend again asked the group to leave the property. The friend, who was holding a metal pipe, threw the pipe at the other group, according to the charges.

Allen was pronounced dead at the scene. The other man was taken to a local hospital with multiple stab wounds but survived.

Salt Lake police used a K-9 to track down the four men and arrest them.

Gonne is the only person from the group who has been charged with murder.